Kaoshan Road is called a night paradise for poor young people. It has never been heard of before, probably because there are more and more backpackers in China and more and more contacts with foreign countries in recent years, so I know this place where international backpackers gather. When wandering around at night, I happened to meet a domestic college student who was traveling to Thailand by himself. He lived in Kaoshan Road. Asked if Kaoshan Road was unique in what and attracted so many people, he said it was cheap. It is said that the rent here only needs 150 Thai baht, but the room needs at least 6 people. Sometimes with good luck, there are few guests, and there may be a room of six people with only one person living in it, which becomes a single room. However, this is a very small probability event.

From the hotel to the left, go straight to a T-junction, which is only ten minutes away. It is very easy. At the roadside stall at the gate of the hotel, I ate a bowl of genuine Thai rice noodles, 40 Thai baht, and only two people spent 80 Thai baht, which was really cheap. Then I walked to Kaoshan Road. Later, it was discovered that the cheapest time to eat in Thailand was in Bangkok. 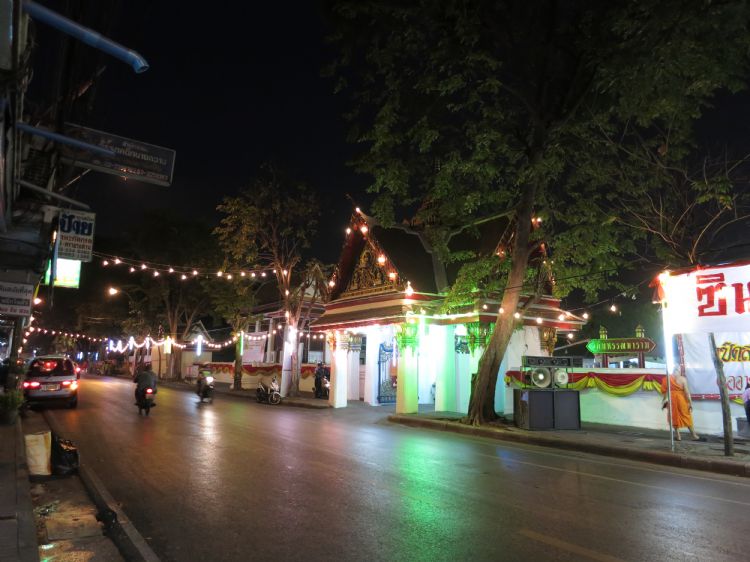 This brightly lit temple is just facing the street of our hotel and has become a reference for us to judge the direction. This is the intersection of the road to democracy, full of large-scale campaign advertisements. To tell the truth, these candidates are all quite beautiful. This is Xie Ailing, who has a fight with Yingluck and is still of Chinese descent. If I had the right to vote, I would definitely give it to her. The road sign at the junction of Kaoshan Road. As soon as I entered Kaoshan Road Pedestrian Street, I was a little excited. I don’t know why. In fact, many cities in China have such night markets. If they are better than the hardware conditions, China’s should be much better than this. However, they just feel good here and have special taste. Is it because there are many foreigners? Or? I really can’t say for sure. The road was crowded with tourists. There are many snacks sold along the street and they taste very good. There are also many people who sell Scorpion what. They are not allowed to take photos. They have to pay for taking photos. It’s disgusting to look at it, so I’m not interested in taking photos. I am making fried noodles for us. It is very delicious and I bought two portions in succession. This service is quite special. It helps to braid hair. Guests can make various requests. Don’t say, it’s really not bad!

Thailand’s bars must be praised. Beer will never be increased indiscriminately. Like China’s bars, they wish to increase their prices dozens of times. The good beer here is 130 Thai baht, and if it is local beer, it is less than 100 Thai baht. We ordered the local beer specially, and the taste was very ordinary. Later, we stopped trying it. During my stay in Thailand, it may be the period when I drink beer most frequently. I drink it every day and every meal. It may be caused by the environment. It seems that if I don’t drink it, I won’t be in Thailand.

It is estimated that there must be no urban management here. The advertisements printed with business cards are multifarious. It is very interesting to see the contents. If you like, you can also print the CIA or FBI, which is quite funny. Coming out of Kaoshan Road, we walked along Democracy Avenue like Democracy Square. The streets were deserted, but the signs of barricades set up by the yellow shirts had not been completely removed.

The back of this fence is full of tires and sandbags. Originally, it was two-way roads, one of which was sealed. All vehicles only used one road. Fortunately, it is in Bangkok. If it is in Beijing, it will not be a mess. The Thai people are still very orderly. Everyone takes their own side and gives way to the opposite car. Everything is in good order. I admire the consciousness of the Thai people. This is the well-known Democracy Square. Seeing the extremely cold appearance in front of us, it is difficult to connect it with the tense road closure demonstration a few days ago.

Thailand’s democracy is very regrettable, The opposition, represented by Thailand’s elite, is too small to win a free election of one person, one vote. However, they insist that their ideas are more in line with Thailand’s national interests, and the Thai people just don’t buy their accounts. They got to Taiwan with the help of the military coup last time and lost the election again due to the red shirt protests. This time, their demand has changed to reform, that is, to reform Thailand’s existing electoral system, but which is so easy to reform the electoral system? This requires amending the Constitution. To put it bluntly, there is no one person, one vote. Otherwise, the opposition party will not have so many votes. This has become a deadlock: a political party that claims to best represent the wishes of the overwhelming majority of the Thai people must deprive the majority of the working people of their voting rights to be elected. How can it be said that it can represent the people? Therefore, opposition demonstrations and road closures are all in a dilemma. Those who took part in the demonstration all paid for it. After all, the opposition party’s funds were limited and could not afford it. Similarly, as the road closure has affected Thailand’s international image and given the international community an impact of political instability in Thailand, the number of tourists to Thailand has declined, affecting the income of the general public, who cannot support the opposition. The road closure has even affected the lives of Bangkok people. Over time, they have not supported the opposition. Yingluck’s move to use Roukegang is also a masterful move. It is lukewarm. The reactionaries cannot find a pretext to attack the government. At most, the forcible containment of some polling stations on the day of voting prevents the voting from proceeding smoothly, but it cannot change the current political structure in Thailand.

During his stay in Thailand, all the people he came into contact with supported Yingluck. I sympathize with the plight of the elite, but oppose this endless entanglement. Thailand belongs to the Thai people. The nearly ten years of political struggle have left the Asian dragon, which has embarked on a fast track of economic development, behind a lot. I was a little excited to see this restaurant. This is a very famous Thai restaurant in Bangkok. I ate in it several times before. It’s already very late, and there are still people in the same position. The public praise should be very good. Walking through Democracy Square, a large-scale temple complex appeared in front of us. There was a lighting project, a small garden in front of us, and a statue in the small garden. It should be very well-connected. At that time, it was too late, and it seemed that the surrounding area was not small. I wanted to come back during the day. Unfortunately, there was no spare time. This was the only regret of this trip to Thailand. On the color sign beside the temple, I saw that the temple was called Wat Ratchanatdaram Woravihara. When I came back, I checked it on Baidu. The Chinese translation here is Wang Sun Temple, which is located in Rachatannon Street and was built during the reign of Thai Emperor Rama III. The temple retains a pyramid-shaped pink Loha Prasat (metal-topped pagoda) built in Sri Lankan style. It is a magnificent building surrounded by 37 spire. There are only three cases of this minaret pagoda in the history of Buddhism, and it is the only minaret temple preserved in the world at present. In front of the temple are the monument to Rama III and Maha Chetsadabodin, which serves as the official reception desk for the head of state. Opposite the temple is Mahakan Fortress, which is part of the ancient city wall. Known as the metal castel, 37 towers are all made of iron. This is the only one in Thailand, and it is said that only here in the world, India and Sri Lanka have well-preserved iron tower temples. When I went to the temple, it was an exhibition on the architectural design of the temple. It is very different from other temples and looks like a castle from a distance. Personally, I think it is worth visiting ~

When I returned to the hotel, it was still lively here. Go in and see what was going on. It is very much like a temple fair in China. There are all those selling what.

The Sleeping Buddha Temple, the Temple of Thousand Pagodas in Thailand