The floods in Thailand have been raging in recent months. When I was in Thailand, the floods had already threatened Bangkok. In fact, the northern and western parts of Bangkok had been hit by the floods. Famous scenic spots such as the National Museum and WAT ARUN have been flooded, and scenic spots near Bangkok such as AYUTHAYA have been severely affected. Therefore, I have to say that this trip to Thailand is somewhat regrettable.

Fortunately, I am good at exploring entertainment resources. Upon the recommendation of a German bald head from a travel agency (it proved that it was neither a bluff nor a bluff, which will be explained later), I chose KOH PHANGAN, north of Sumi Island, as a paradise to avoid floods. In fact, I haven’t heard of this island before I came here, but I just heard that it retains more original ecology than Sumi Island and Phuket Island.

Starting from Bangkok, after a night of bus turbulence, I arrived at SURATTHANI’s transfer station at 6 a.m. and then transferred to the ferry. The second stop was KOH PHANGAN.

After turning around the dock alone with my bag on my back for two times, I found that I was fooled by the German bald head: there was not a Chinese here; Asked there is no Chinese restaurant on the island. The only public transportation is TUK-TUK, which is transformed from convertible Mazda, and the price is very expensive, killing foreigners. There is no shopping mall on the island, and the only one who can buy something is 7-even.

When I get back to Bangkok, I will definitely pick up the German.

After putting things away at the hotel, go out for a stroll and buy some mosquito repellent water by the way. Fortunately, the scenery on the island is good. This is an evening walk. 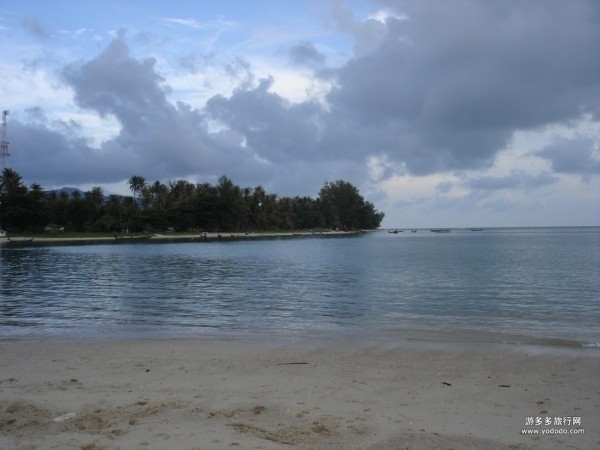 The hotel is on the seaside and is called WEANGTHAI. It is difficult to understand the meaning of what. Anyway, the price is cheap and the location is also in from the port, making it convenient to rush back to Bangkok at any time. In the evening, I chatted with other tenants and got a certain understanding of KOH PHANGAN. In fact, the island is very famous in Europe and America. The most famous ones are 2 points:

One is the full moon party, which is one of the world’s three major outdoor carnival dances. Every full moon night, guests from the surrounding islands will go to the island to attend the monthly beach outdoor party. The world’s top DJs will also perform on the stage, and handsome men and women will revel all night.

The second is diving. KOH PHANGAN and KOH TAO to the north are famous diving resorts in Thailand. The sea water temperature is very high and the transparency is good. The key is that the price of learning diving is much cheaper than that in other places.

I was not interested in the party, but my heart moved when I heard diving. My swimming level is average, but diving does not require too advanced swimming skills, and for me, an office worker, I usually have too little exercise time, so it is also very interesting to challenge myself, not to mention getting a diving license. I signed up without hesitation.

As the hotel’s underwater camera battery has a problem and cannot be rented, I only recorded the whole process from a novice to a diving beginner and obtained a license in an oral way, so as to give some experience to students who are interested in diving on the island in the future.

Diving is a sport that is easy to learn but difficult to master, so it is easy to get a primary diving license. All you need to do is pass the course examination and complete 4 diving practices according to the guidance of the coach.

The first day: Learning theoretical courses in the morning is the basic knowledge of diving, mainly self-help skills. In fact, most of the contents learned in practice and class later are self-help skills, which shows that safety is the first. For this kind of courses, the theoretical difficulty is very low. The only difficulty is the language, which uses English all the way. As for the teaching materials, there are German and French, not Chinese. Facing many proper nouns of chemistry and diving skills, one should be psychologically prepared when learning, and it is best to preview them in advance.

The afternoon is the first practical training, which is located in the hotel swimming pool, as follows: 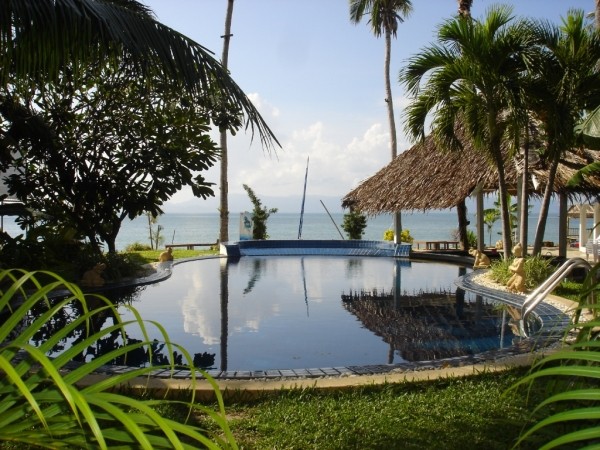 Coach Danny is a retired US soldier. Note that this is not diving training and is not included in the 4 dives, because the English dive refers to the exercise of diving more than 5 meters under the natural environment, and the swimming pool obviously cannot meet this standard.

First of all, the coach checked the basic swimming level, such as swimming back and forth in the swimming pool for several times and keeping floating on the water for 5-10 minutes. For a person with average swimming level like me, it barely reached the standard. Americans actually communicate very well, and it is OK to reach the standard. This process requires students to be prepared to wait for rescue on the sea when oxygen tanks cannot be used. Then there is the operation with a steel cylinder. The steel cylinder is Tank, which stores compressed air. I thought it was pure oxygen and sweat. Later, in the process of theoretical study, I finally knew why it could not be pure oxygen. The content of this study is mainly how to use steel cylinders, air pipes, diving suits, inflatable jackets and other equipment, as well as some gestures and movements in the water. Although it is not difficult, it takes a lot of physical strength to learn in 3 hours.

In the afternoon, I will continue my theoretical study. It will be better if I previewed it the day before. This study is mainly about the use of RDP tables and the judgment of sea situations. In short, the theory is not difficult and the language is a little troublesome. Fortunately, I am a consumer and the coach doesn’t mind doing some repeated guidance occasionally. Ha ha.

There is a beach to the north of KOH PHANGAN Island-KOH MA, with an average water depth of 9 meters and a maximum depth of 30 meters. It is very suitable for beginners like me, where I will finish diving twice. Starting from today, another coach Jeffrey will guide him. This gentleman is a British aborigine, but I don’t see any British temperament at all. There are photos behind him to prove it. Of course, he is very friendly, very accommodating, and good communication is king.

First of all, the coach inspected all kinds of water movements learned in the swimming pool before, such as gestures, taking off and changing equipment, peer rescue, etc. After diving to a depth of 12 meters, the control of diving speed, eardrum protection, water suspension, etc. were investigated during the process. I didn’t expect that the first time I dived, I was caught in a fishing net placed by fishermen in the sea. The coach quickly stopped the diving. It was still a little dangerous if I was entangled. The speed of ocean currents in the sea is relatively fast, and the difficulty lies in controlling the body when suspended in the water. Beginners are often washed out of balance by the current. Of course, even so, it is still interesting. For the first time, I saw coral and sea urchin of various colors in the water, as well as Nemo fish. I couldn’t express my excitement.

The first dive depth is 12.8 meters and the bottom time is 32 minutes, which is recorded in the dive log. After that, I went ashore to replace the oxygen cylinder, and took a second diving after taking a rest according to the RDP form time. As the contents were roughly the same, I stopped wording.

This is the most memorable day in the whole learning process, because today’s destination is Sail Rock highly recommended by KOH PHANGAN North Diving enthusiasts. The ship I was on was full of divers from Europe, and there were no Asians except sailors and me. Arriving about an hour after taking a boat from the island, Sail Rock is actually a rock protruding from the sea surface in the Gulf of Thailand. While the coach launched to fix the buoy, I made a visual inspection. It is about 10 meters in diameter and no more than 20 meters in height. There are no islands around it, and the average water depth around it is 22 meters and the deepest is 34 meters. It is very suitable for diving. More importantly, if you are lucky, you can see whale sharks. Imagine swimming with whale sharks is what’s feeling! However, I was lucky. On that day, the sea was a little stormy and the visibility in the water was slightly lower. This kind of situation is unlikely to happen to whale sharks, or it may not be found when it swims more than 10 meters from the diver’s side, because the stormy waves will roll up the sediment on the seabed and the visibility will decrease. Let’s look at coral.

I vowed to buy a diving camera in the future, stay in the coral bushes, and watch groups of fish of various colors parade in line up, down, left and right. It is a great pity that such unforgettable scenery cannot be recorded.

Due to the strong wind and waves, our ship temporarily decided to change its plan and return to KOH MA for the second dive, which was yesterday’s site. The visibility of KOH MA today is better than yesterday, which is a good opportunity to see the scenery. The last dive did not have any examination content. It was purely entertainment. Sometimes the fish schools around me were less than half a meter away from me and did not have any fear of people. However, as soon as I reached out, I immediately disappeared into the coral bushes.

In the afternoon, I went back to the hotel and finished the final theoretical examination after a short rest. The examination questions were not difficult and passed without surprise or danger. After that, I went through the process, filled out the form and obtained the license: PADI Temporary Card

Finally, take a photo with the two coaches. 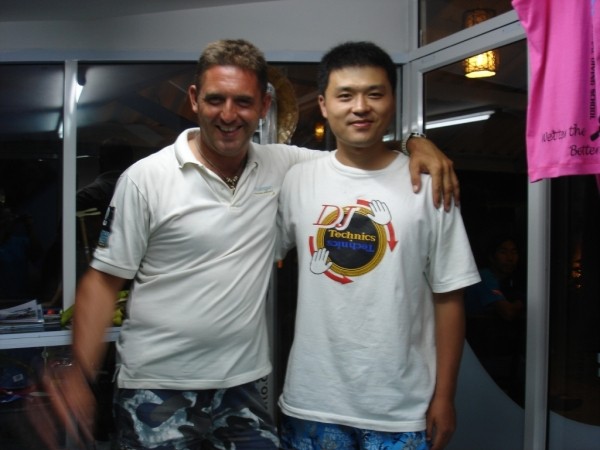 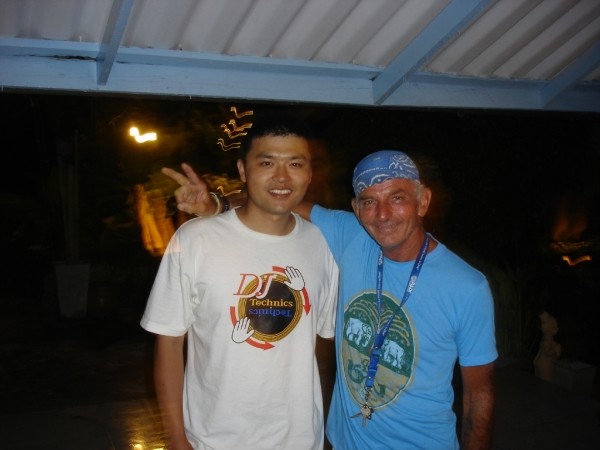 The following are some photos of the hotel taken later. This is one of the hotel rooms, closest to the beach, where a couple lived in Quebec. 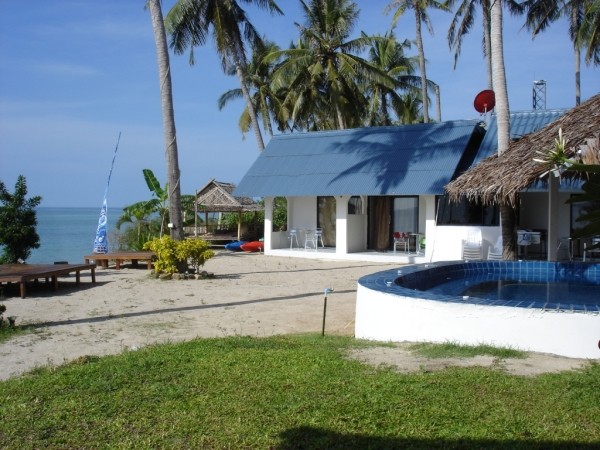 The sea in front of the hotel 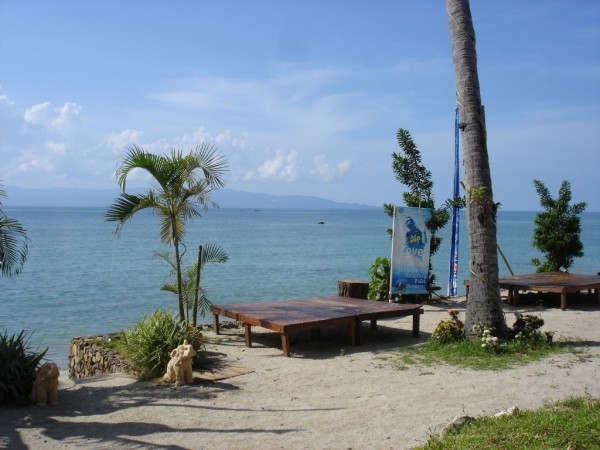 There are many hotels on the island, which are close together. 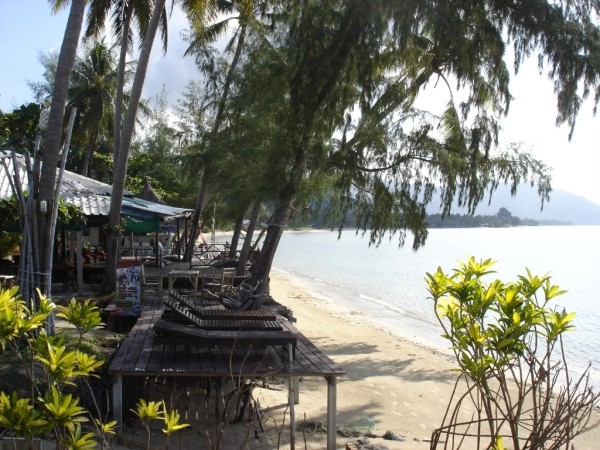 The beach and the sea. 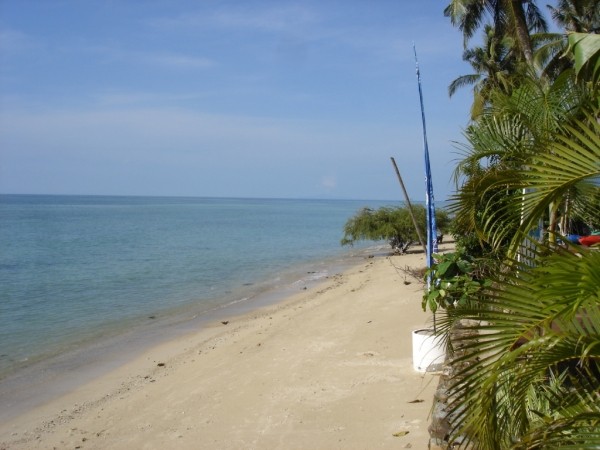 I have to thank the German bald head for recommending KOH PHANGAN to me.