Reading the Story of the Great City: Only One Corner of Prosperity

Big cities are places where people need to calm down and drink slowly. It is not suitable for them to take a cursory look for a day.

Borrow him for two days, entrust the morning and evening, and repay you for a hundred years.

Since guest house rented a bicycle, he began to read the book Big City carefully.

The streets were empty at noon.

Although I was holding the map, I had no idea where to go.

In the big city, it is really easy to meet the ruins at the corner.

Less than 5 minutes after departure, mottled pagodas, palace pillars and upright pagodas rushed into view, with only low walls (or none at all), as if they did not hide their heartache at all.

The glory of the Dacheng Dynasty, which began in the 13th century for more than 400 years, the majesty of 34 monarchs and the distractions of businessmen from all over the world, were all torched by the Burmese army after it was looted. The 2,000 gold-plated minarets and temples have since lost their prosperity, leaving only broken walls.

This kind of scene is to make dozens of copies of the dilapidated Yuanmingyuan. 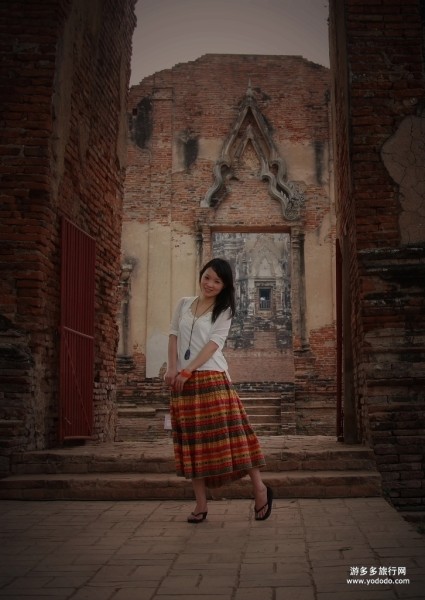 How many courtyards are deep and only a few people look around. 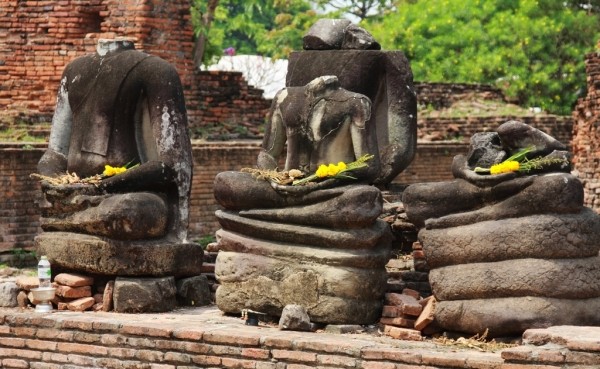 The bright color in the hand, the prosperity in the corner. 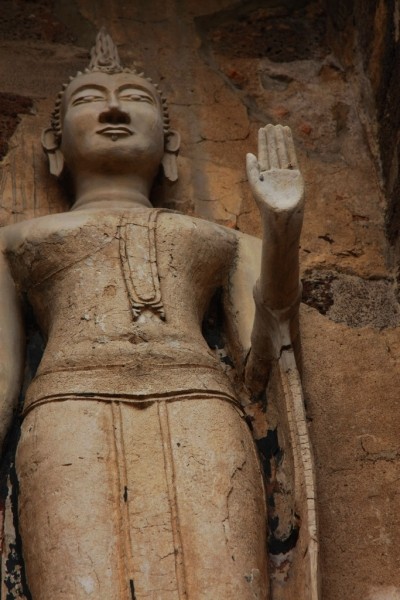 Years have never climbed up your face, but I can’t find what you looked like at that time. 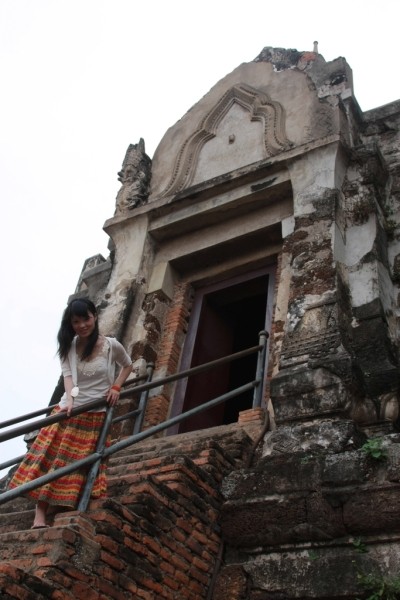 The big city Authaya means “indestructible city”, but in front of time, there is what that can last forever? 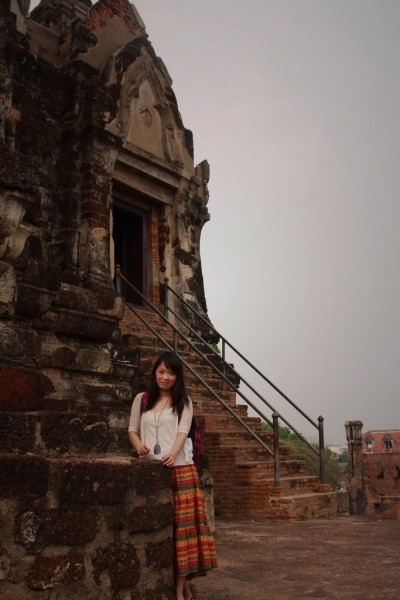 This photo was taken by the following Korean boy: 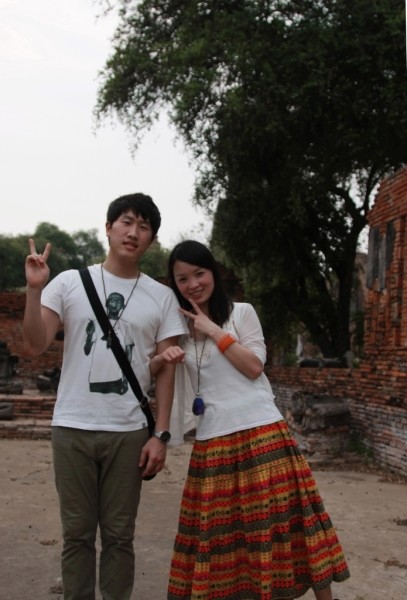 Starting from this young man, Doudou was asked the most along the way: from Janpan?

At this point, Doudou thinks I can’t continue your Chinese and my Korean. Smecta, you know, thanks to “Blue Life and Death Love” and “If Love Has Providence” which I have seen more than twice, all I have left is: Mi a Nai (I’m sorry) and SA Rang Hai (I love you), which is really inappropriate to say.

Fortunately, South Korean students stopped exchanging languages and asked directly in English if they could take a photo. Sure, Smecta!

Only the posture of this photo was taken… it is very likely that the Korean people will say that the Chinese girl took the photo arm in arm (it seems that Koreans prefer to say a lot of things are their own). The actual situation is that people raise their arms very gentlemanly, and we can’t wriggle, can we? 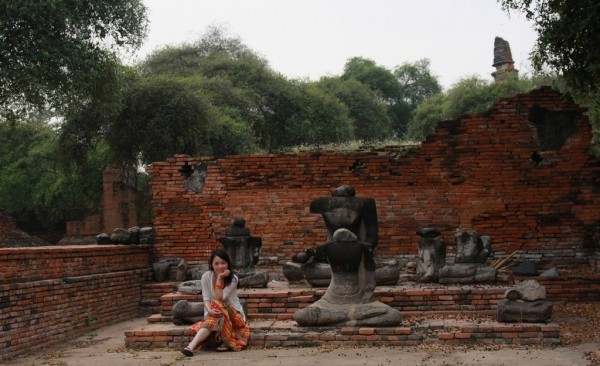 Chiang Mai Oriental Mandarin Hotel and its luxurious reproduction of a Lana Dynasty, but the big city is full of broken walls and different heads. Perhaps today, he has become more accustomed to collecting a sigh. 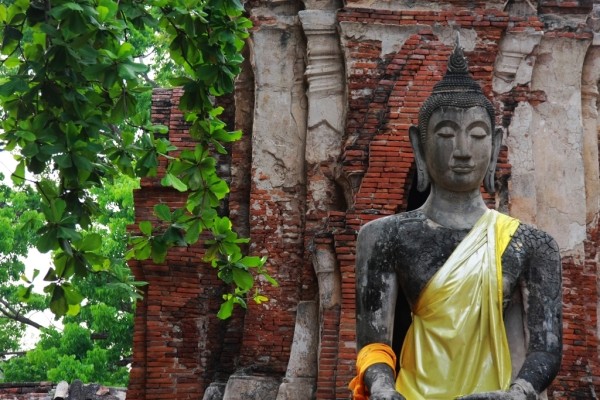 Years are mottled on the wall, and you are always silent. 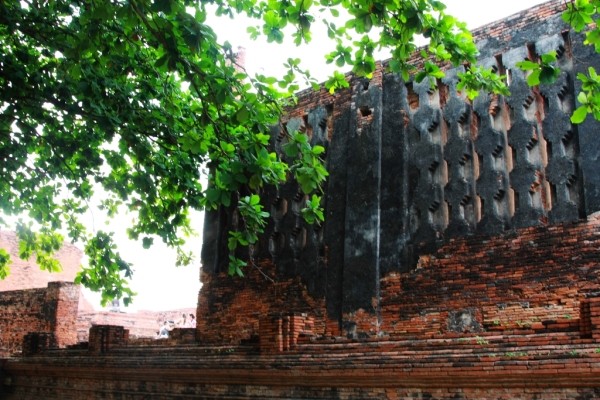 A fire can make a city disappear, a rain can make a seed germinate and grow green year after year, but it cannot hide the damage to muscles and bones. 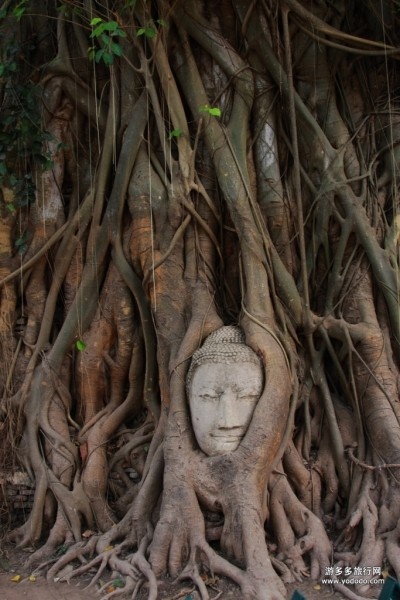 The logo of almost all big city postcards (Wat Maha That)

That night, I was displaced from place to place and met you. One night it was a hundred years……. 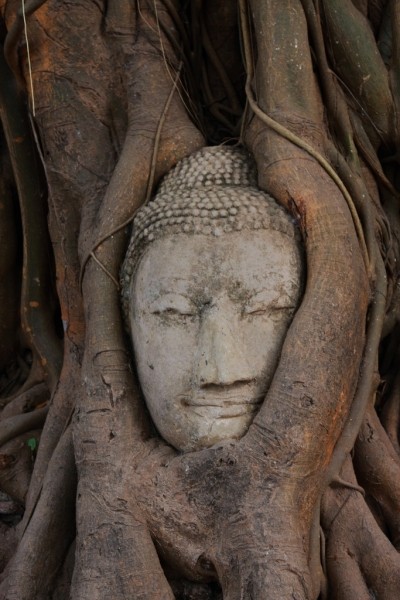 In the past, I always felt that the power of the tree was strong, but the tree seemed to be infected with Buddha’s nature and just held it gently in my arms. There is only protection, no restraint.

It seems that there is nothing important in the big city, so I just idle and wait for the sunset.

When hungry, he ran to the opposite night market to look for food. When he was finished, he continued to wander in the monuments and temples. Anyway, he did not charge tickets.

This is a living ancient city:

Teenagers play football here, no one patrols, of course, no one destroys it. 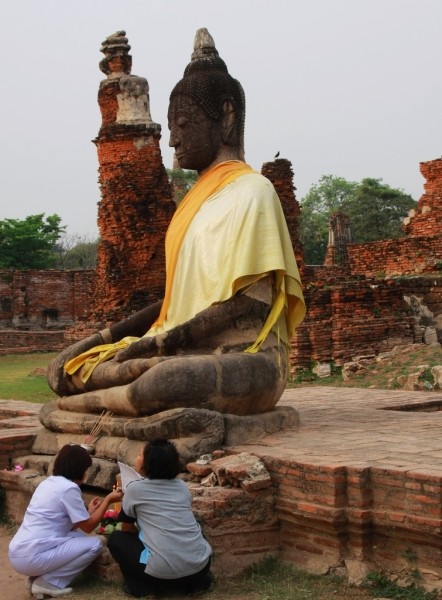 It is also good to have a pious heart.

After visiting the two nearest temples on the first day, I was wounded and went back to rest.

I feel that I am in love with this thick and vicissitudes of the ancient city.

So let me come to you, close as I want be, close enough for me, to feel your heart beating fast……

I know that the smile of the classical Buddha is blooming not far away, and I am only grateful to be able to “sleep together” with him so close.

The next day, I spread out the map and looked at it carefully. Doudou was dumbfounded. This is an ancient city in how. There are 58 historic sites marked out alone, while I only visited the nearest two in the last few hours yesterday afternoon.

In the afternoon, I will leave for Bangkok……..

Well, I still don’t want to take a cursory look at it in a hurry. I’ll bring you back two days after my National Day trip to Sri Lanka and my connecting flight in Bangkok. 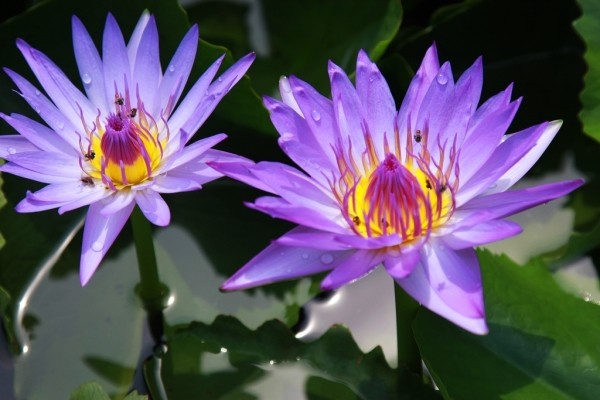 No one collects tickets, but someone keeps lotus flowers. 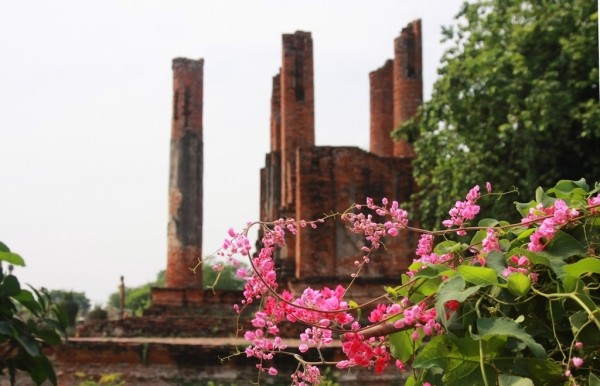 Strong is humiliating, strong is easy to destroy, empire or mainstay, it is better to have a tree full of flowers.

The plumeria here is also one point less, the sunshine is fresh when the sea is blue and the sky is blue, and one point more is sparse. 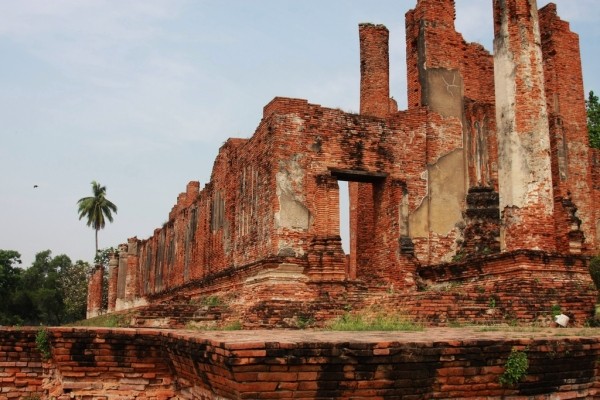 Diaolan Yuche is not here. Who has been saddened here? 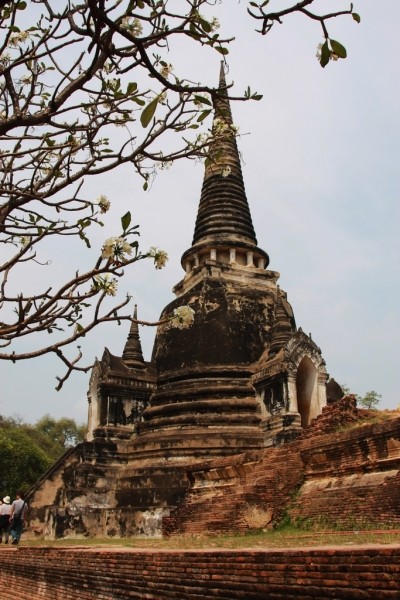 Fortunately, there are also many pagodas that have retained * *; 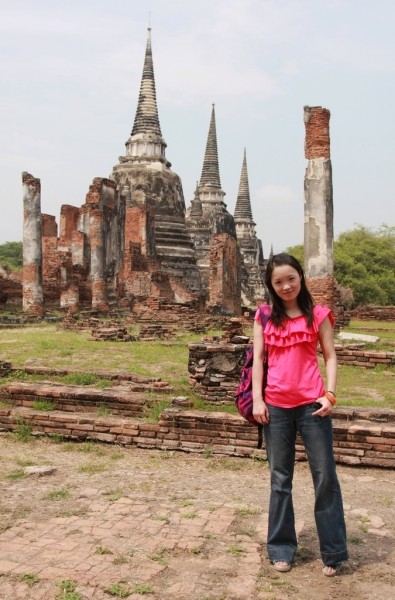 Because of its massiness, Doudou has to wear more and more bright clothes. 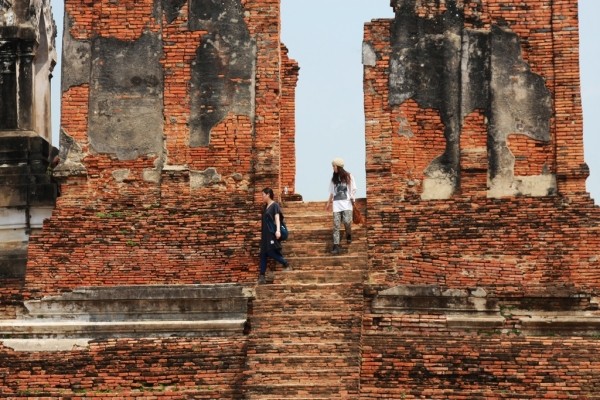 Of course, there are also some people who follow the thick color route that matches the atmosphere. 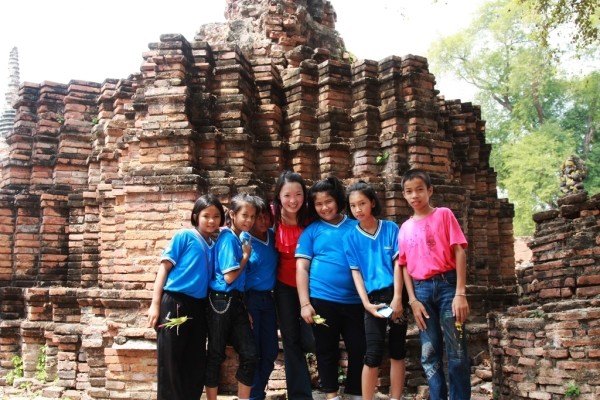 However, when we meet, we should smile, shouldn’t we?

The only tour group in Dacheng comes from Japan. They like to ride elephants around the ruins. 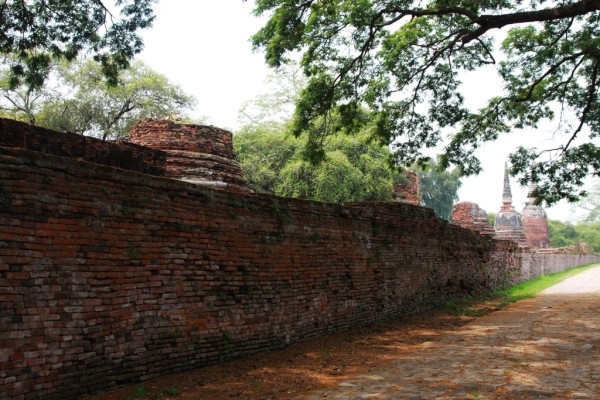 I hope that in October at the end of the rainy season, I will stroll here again and let the rain wash away the dust from history and my heart. 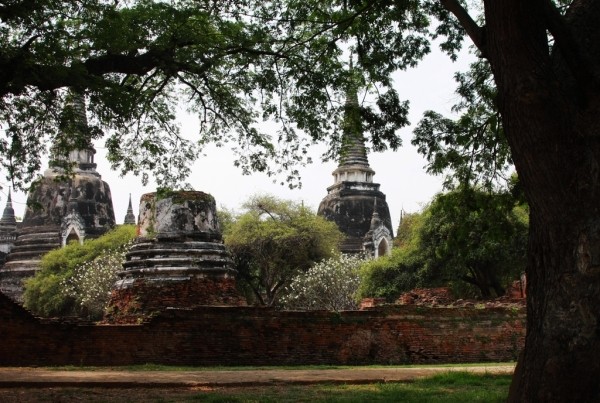 I am a tree in autumn, quietly guarding a small territory. I have never envied the prosperity, because the most beautiful thing is not in the distance. 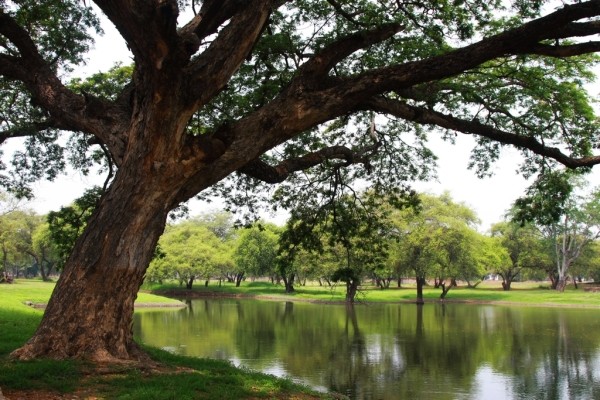 The big city is surrounded 360 degrees by a moat. Even after stripping away the dazzling many historic sites, the quietness in this corner is also pleasing.

As if you’re never hurt

As if you’re never down.

This big tree is quite like Juli Baker’s favorite buttonwood tree in “Bang Ran Xin”.