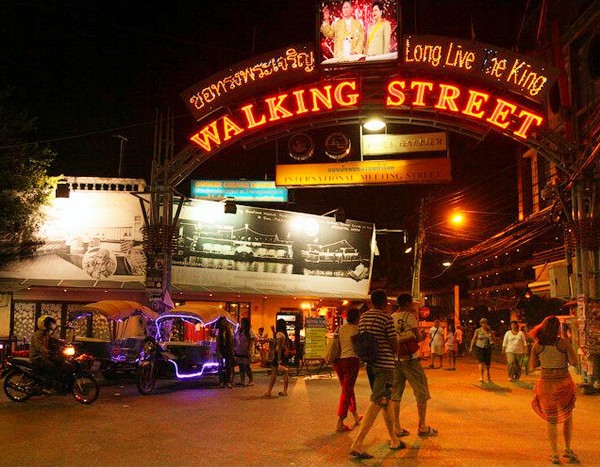 After supper, it was already very dark. Pattaya beach is hazy, At first glance, it is only a dark piece, which is displayed there in a vast way, like mountains in the dark night. The dark faint blocks your view, making you unable to see how wide it is or how long it is. You can only feel the darkness very deep and far from the consciousness of understanding the sea. Even Superman’s heavenly eyes, wisdom eyes and law eyes cannot see the end.

At this time, the breathtaking blue sky inherent in the sea, White clouds, The green oases at the junction of the sky and the sea, The vast and boundless blue and clear sea water and the chirping of some flying seabirds have quietly retreated to the back of the deep darkness and changed into a quiet and delicate scenery. The color of the sea water has also changed into dark green like chameleon, shining with the lights along the coast and sparkling, appearing extremely mysterious and beautiful.

The lights of the Long Beach Street were shining continuously and densely, red, yellow, white and blue, shining from the tall buildings, from the roadsides, from the coconut and palm trees, from the cabin-like bars, and sprinkling on the sea and sand. There are not many people on the beach. Besides people, there are also some colorful dogs playing with the beach and sea water. The dogs on the beach spread out in pairs of three and three, walking leisurely like people.

Some people say, “Pattaya, you don’t know the darkness of night during the day”. Indeed, the place that best embodies this sentence is Pattaya Pedestrian Street, which is located in the long seaside street. In the evening, all kinds of adult performances here are bizarre, and all kinds of chicken, duck and goose shops add radiance to each other. The whole pedestrian street is brightly lit, just like the Milky Way Xinghai. Tourists from all over the world rub their shoulders and heels, and they do not know how to return.

The transvestite is one of Pattaya’s characteristics. When American soldiers found that there were too few women on this beautiful beach, the transvestite came into being. Strangely, corresponding to the beautiful transvestite, Thailand’s ugliest women are all concentrated here, with black skin, concave nose bridge, thick lips and short stature. They are too ugly to bear to see more.

But these ugly women, Europeans and Americans are extremely fond of it. They think that they are full of wild beauty and their shiny skin is full of temptation. They are just like the “golden cat” who starts to arrest people. It is too attractive. It is not surprising that a foreigner in the street who is tall and full of superiority often follows a local woman who shows her big teeth with a short smile.

The pedestrian street is full of restaurants, open-air bars and small stalls selling clothes. The bars here are different from Bangkok in that there are no walls or doors, only cheap beer, bronze-colored bar women and the uneasy and turbulent air inherent in the tropics. Sometimes there are expired transvestites who make guest singing and dancing here, or singers with long hair and a little resemblance to power trains who sing and take photos of them. They will also shake their hands and POSE happily.

Some neatly dressed “Thai sisters” with long shoulder-length hair stood or sat by the door of the store, gazing amiably at every target that could be caught in the past. There are many street stops soliciting customers, most of whom are holding a sign with their “service price” written on it. Some of them are gorgeous, some are hot and some are gentle, making all the people who pass by feel the temptation of “* *” here.

The band was accompanied, the singer was singing, and the girls were dancing on the bar. The bar was almost full of people, men, women and children. Each person has a drink. If he is happy, he can also sing a song and ask the band to accompany him. Some foreign girls, happy, also jumped onto the bar to dance a song. Fully degenerate, without any worries.

There are colorful neon lights everywhere, deafening music everywhere, exposed girls everywhere, and foreigners everywhere for fun. This is Pattaya’s night. It is difficult to distinguish which is the real Thailand. Day and night are completely two worlds. Ha ha, heaven and hell are all on earth.

Walking along the street to the dim lights, a Russian bar appeared. I looked at the words written on the wall and still vaguely understood them. He went in. The boss is Russian. As the number of Russian tourists gradually increased, they came here to open a bar with many guests every day. I listened to Russian songs accompanied by guitar or accordion, deja vu and felt a little nostalgic.

Foreigners come to Pattaya to perform and open bars, which should still be relatively rare. On the one hand, this shows that Thailand’s tourism industry is developing relatively well and foreigners can make money here. On the other hand, it shows that the economic recession in Europe is still relatively obvious, especially in Eastern Europe. Otherwise, with the arrogance of Europeans, I think I would definitely not like to come to the East to perform arts.

At midnight, the bustling streets became more boiling. People gradually entered a semi-crazy state. Even some old people with all white hair stood up and danced, singing and dancing. Large glasses of beer with foam splashed on the bar counter, on the table, on clothes and on the carpet, and a lot of money flowed into the bar counter.

The slogan of Pattaya City Government’s advertisement is: “Pattaya will never sleep. For you, she is the best tourist destination. “It is said that more than 3 million tourists gather in Pattaya every year. When these tourists watch the wonderful performance of the transvestite on the Oriental Princess, and when these tourists enter the bustling streets, no one is intoxicated, stimulated or even at a loss by this charming night in Pattaya…….

If you come, it will be a harvest: love in pai city, Chiang Mai, Thailand, pai in love