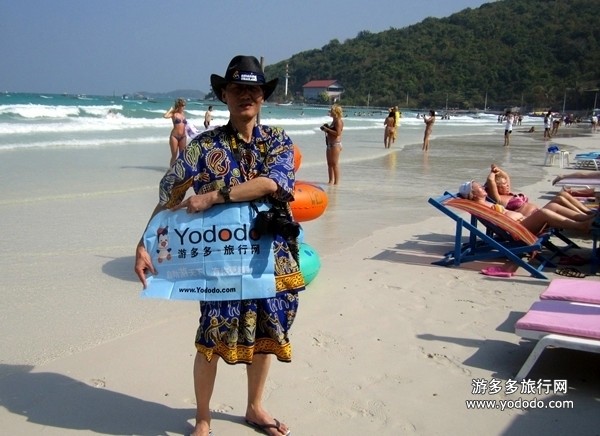 The endless western Pacific Gulf of Siam is dotted with flower-like islets. In the center of the islets is a thick green tropical rain forest surrounded by pure white sand beaches. The color of the surrounding sea water progresses layer by layer from deep blue lake, blue sky, blue blue and light blue. The beautiful scenery like a dream makes people intoxicated…….

Among these many islands, there is such an island with charming scenery like a graceful fairy. It is quiet, elegant and does not lose its light. Its fresh and romantic temperament and unpolished original style are fascinating. It is Pattaya that once intoxicated me. I had the privilege of being here just a few days ago.

Pattaya is located in Chonburi Prefecture 147 kilometers southeast of Bangkok. In the 1960s, Pattaya was only a small fishing village on the east coast of Siam Bay. It was discovered by Americans during the Vietnam War. Since April 1961, US military base personnel stationed in Uwen, northeastern Thailand, have flocked to Pattaya, a beautiful beach, whenever they take a vacation.

Since then, Pattaya, which is unknown, has started its rapid development. Various commercial categories and trades have emerged and become a world-famous seaside resort in just 30 years. It quickly became Thailand’s most famous beach resort and a bright pearl on the east coast, known as “Oriental Hawaii”.

Take a bus to the seaside. The road gradually widened. When the beach could be seen, the road was already a flat and spacious asphalt road, winding along the coast. On both sides of the road are coconut trees, neat and tall. The triangle plum flowers on the roadside are blooming brilliantly. Pieces of pink petals like butterfly fairies are dancing among the green leaves, lively and lovely like elves under the sunshine.

On the beach, the delicate and soft white sand stroked my bare soles, one by one, to keep my footsteps. With a little force, the young sand came up from the toes of the feet without making any noise, but when the foot was lifted, it hurried down again-a shy expression. I wanted to take a handful of fine sand with me, but when I scooped it up, it had already raised a gentle flag between my fingers. As a result, I no longer want to seize it, open my fingers and stretch out my hands as if I already own the whole beach.

Above me is the sky. It was a stretch of blue that could not be seen or worn, and a deep dazzle of tranquility that could not be grasped. I put bundles into my sight, but they gradually rose and rose and rose and fell away in the blue until they melted and hung high into a distant sky. On the horizon, white clouds are like sails. In front of me is the sea. It was inexhaustible clear and clear, and irresistible exultation. I sent my eyes one after another, but they swam deeper and deeper and became more transparent in the ups and downs until they seeped together and became a sea of blue water. Cape, island like moss.

On the speedboat, I seemed moved into a blue spirit in Pattaya’s blue sea and sky. After speeding for about 30 minutes, the front Sands Island came into view. Sands Island has snow-like fine sand Long Beach, blue sky and crescent-like bay. This is Pattaya’s most beautiful and primitive island.

The speedboat stopped at the flat and wide beach on the south coast of the island, and a silver beach five or six kilometers long was displayed in front of us in the north of the island. This is an open public bath beach. The sea water is light blue and light blue, glittering and translucent, sparkling, smooth and secluded green, tender, graceful and affectionate… The natural scenery on the beach and the beautiful girls and beauties from all over the world really make people heartache.

The beach is lined with beach chairs and sun umbrellas. There are many restaurants along the beach, usually mainly seafood, and there are also many tourist shops with ethnic characteristics. Vendors sell silk fabrics, swimsuits, casual pants, ethnic costumes, leather * * leather, handicrafts to tourists, and there are also women who tie braids.

There are all kinds of water sports on the beach, such as motorboats, skateboarding, banana boats, etc. This is also a world-famous diving holy place, so I first took part in this diving activity called Walking in the Sea. . The beautiful coral reefs on the seabed are surrounded by clear sea water and can clearly see all kinds of colorful tropical fish, devil fish, sea cucumbers, dolphins and other marine organisms.

When I realized that I had reached the deep sea, Suddenly I felt a tinnitus, a swollen head and shortness of breath. Groups of small oval fish with various colors and patterns swam past me. There was also a big turtle with beautiful spots chasing and catching the fish in dancing. Only at the moment I had no intention of watching these marine creatures and the beautiful scenery of the seabed.

In a few seconds, my head arched out of the water. I breathed a sigh of relief and the depression in my chest was released at once. After a false alarm, I finally got a new life and saw the light of day again, but the back of the barge and the eardrum were still swollen and painful for a long time. One by one, people excitedly exchanged what they saw and heard under the water, telling the happiness of diving. They all thought the diving time was too short to come up. Ha ha, I was the only one who told the story of underwater distress.

Then, I experienced the feeling of “parachuting”. Put on a special life jacket, littered with a strong tie. “One, two, three, put! “Ooh, I suddenly was a huge sudden force fiercely pulled out of the floating platform. The strong inertia made my head suddenly lean back, leaving people in the air and my heart in the air. Therefore, I couldn’t help shouting, “Ah-! “

Ear, whirring is the wind. The unbalanced vertigo soon disappeared. Already in the high sky. Like ants is pulling my speedboat on the sea, like matchboxes is floating platform, I fly very high. I couldn’t feel the pull of the cable in front of my abdomen. I really felt that I was flying. Flying on the sea of Pattaya, flying in the blue sky of Pattaya!

What a high blue sky! What a vast sea! For the first time, I looked at the sky and the sea from such an angle and so clearly. The wind passed clearly by my side, like silk. The parachute, very large, bright orange and bright indigo stripes surrounded me obliquely above. Hi! Parachutes! I take you with me. Between the sea and sky in Pattaya, you are a blueprint for my life. And I am the most romantic and wonderful record on your blueprint.

The speedboat pulled me. Slowly, the floating platform approached. Looking at the shadow of my own and parachute, it gradually became clear on the sea surface. I bid farewell to Feitian’s emotion. When people applauded for my graceful landing, and when my companions kept my last flying posture, I silently pressed my chest with my palm and told myself: I have experienced a journey of love-love heaven, love sea, love myself, love the people I love.

The sun set slowly. The setting sun shone its last golden light on the white clouds, dyeing the sky red with rosy clouds. The sea seems to have solidified at Pattaya Beach in the sunset. The ribbon-shaped clouds, as if painted with color by the painter, have become colorful clouds. Under the background of sunset glow, what appears is the beautiful and unforgettable silhouette.

On the beach, there was a wonderful melody of guitar. A group of teenagers set up grills on the beach, playing and singing while eating barbecue. I really want to join them and sing with the brisk rhythm. The setting sun slowly sank into the sea level. When the last glow of the setting sun was reflected on everyone’s face, smiling faces were as beautiful and gorgeous as triangle plum in full bloom…….

Record 7 days of drifting in Thailand. . .