My trip was not too “embarrassing”-Happy Thailand trip (middle)

Accustomed to the sunny and rainy weather in northern Thailand, the sun showed a little face in the morning. I don’t know when the rain will patronize again.

Today’s one-day tour of Chiang Mai Elephant Camp is also booked in advance. It is only an hour’s drive from the ancient city of Chiang Mai to Maetang Elephant Park. The popularity of the Elephant Camp is so high that all items have to be reserved. We have to spend time in souvenir shops. The lifelike elephant products are really exciting, but the price is really not flattering. Finally, it was our turn to take a bamboo raft. The drifting without any characteristics was disappointing. The rafters also asked us for tips from time to time and ignored them.

The elephant show was very interesting. When Mr. Xiang and Miss Xiang saluted the audience, their front legs bent, their noses swung and Thai dubbing “Savadhika” was so cute. 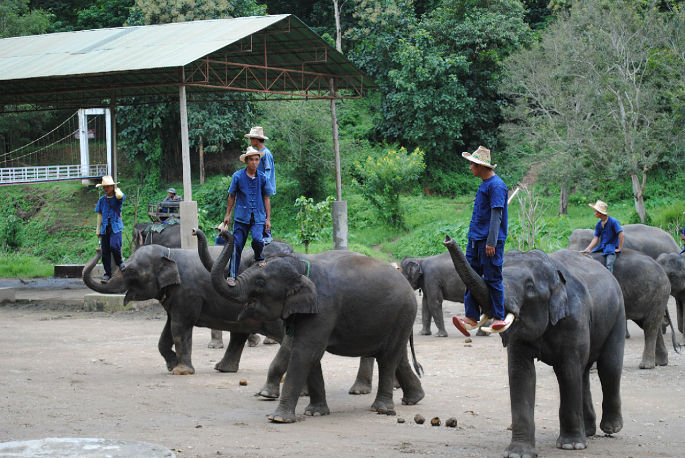 It is said that Thailand has a history of training elephants for more than 1,000 years, and these behemoths have become especially clever under the command of elephant trainers. He is proficient in marching in line, transporting wood and dunking. Especially in football, the shooting is accurate, and the stout elephant legs can also play with flowers. The Chinese Football Association might as well hire a Thai elephant trainer to coach the national football team. It should not be a problem to train elephants like this and teach those international players.

The even more amazing performance is the elephant painting, with the elephant’s nose holding a paintbrush, which is very good. The painting also has the signature of each elephant. Collecting such “masterpieces” requires unique vision. 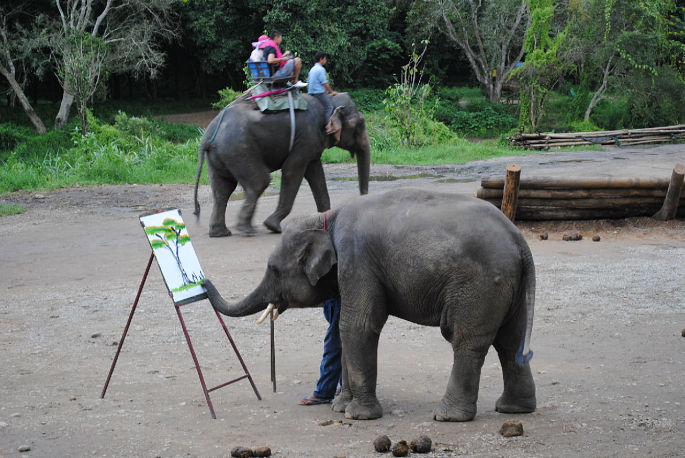 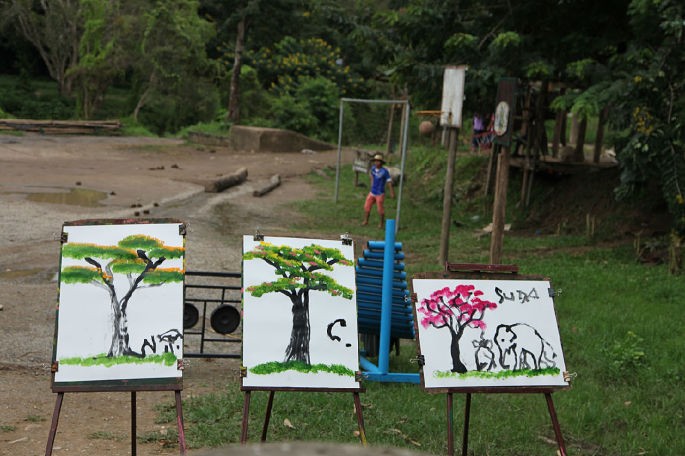 At the end of the performance, the elephant began to get close to the audience, touching and taking photos. The reward was bananas and sugar cane. If Thai baht was given, the smart elephant would never eat it, “treating money like dirt” and giving it all to the elephant trainer.

There was a pouring rain, and the taste of riding an elephant in the rain was not pleasant. Originally, the potholed roads were more muddy. When the elephant climbed the mountain and waded in the water, the chair swung from side to side and bumped up and down due to the movement of the spine bone. In a short period of half an hour, my back was aching. I finally understand that riding an elephant is not enjoyment but endurance. Fortunately, I took a ox cart on my return trip and watched the two bony cows walking slowly in the mud. I couldn’t bear it! 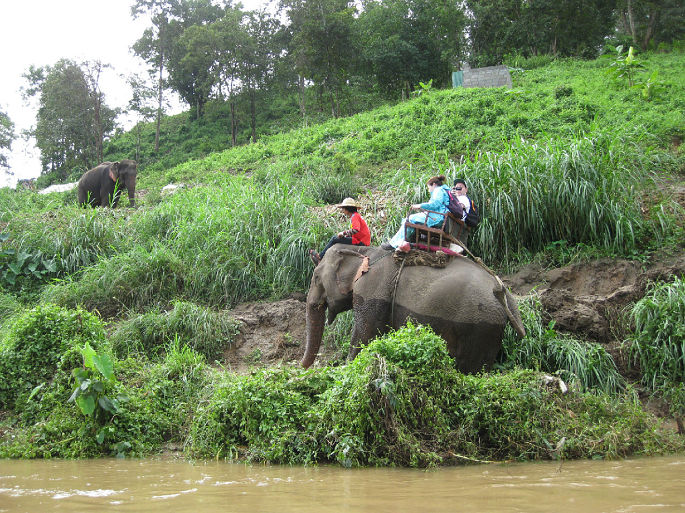 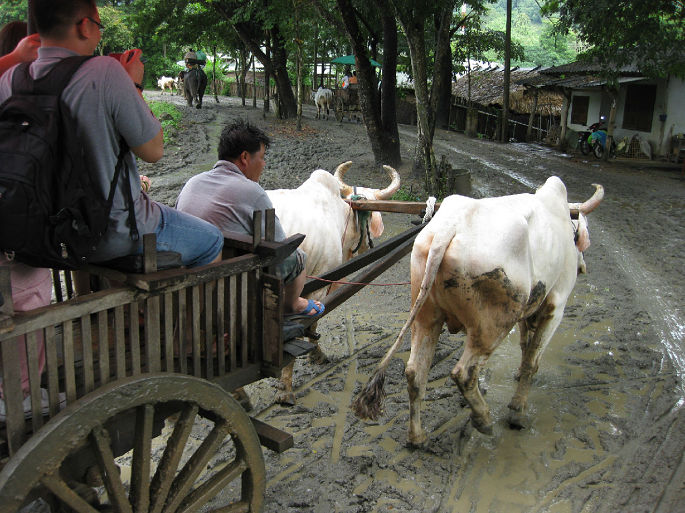 God seemed to be playing tricks on us. It happened that the rain was raining hard during the half hour of riding the elephant. At lunch time, the rain stopped. Yesterday I had a good lunch, but today I refused to be tempted. Enough is enough.

In the afternoon, I went to Taibei Orchid Garden. The tour guide said that many rare orchid varieties were planted in the garden. I didn’t study the plants, but I just thought they were beautiful. The girls were excited and competed with the flowers among the flowers. 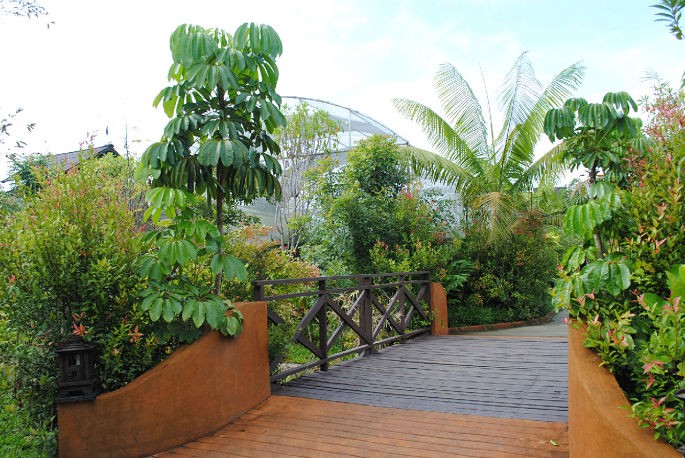 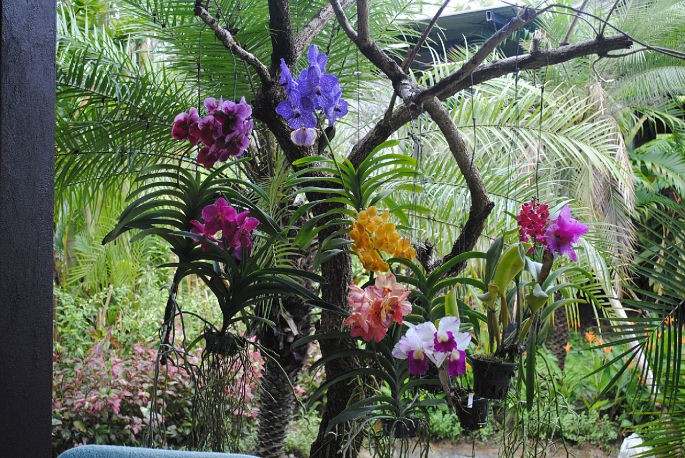 I returned to the ancient city of Chiang Mai early in the afternoon and had a lot of time to squander. Everyone unanimously decided to experience an authentic Thai massage. Chiang Mai Women’s Prison Massage Parlor is the most famous in the local area. It was founded by the former warden to provide employment opportunities for newly released women prisoners. Masseurs are all prisoners in women’s prisons. The LILA THAI MASSAGE we chose is a massage parlor with a certain public welfare nature. The masseurs serving the guests are all female prisoners released from prison. During their sentences, they received massage training provided by Chiang Mai Women’s Prison and skill development, and passed the examination of Chiang Mai Public Health Bureau. Their basic skills are quite solid. 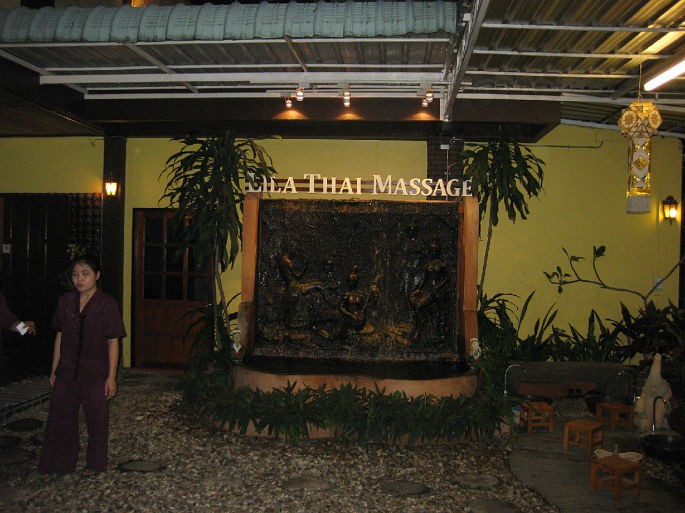 I have tried Thai massage in Thailand before, and the general range of movements is relatively large. We were at the mercy of people like chickens on the chopping board when we were twisted, twisted and torn down. During this period, the girls kept shouting. After howling, I felt relaxed and cool all over!

We found a small restaurant named Lert Ros in an obscure alley. The ugly store was even recommended by LP. There is a kind of salt roasted fish that does not remove fish scales. It is crisp outside and tender inside. It is indeed worthy of its reputation. We still have not finished after ordering two. It’s too pleasant to wander in the streets and lanes of Chiang Mai’s ancient city under the moonlight with a cup of Shake or Juice per person.

Sleep until you wake up naturally. When you arrive at the “country of thousands of Buddhas”, how can you not go to temples? Moreover, Chiang Mai is the capital of the Lanna Thai dynasty, with many Buddhist temples, so today’s trip is to explore Chiang Mai ancient temples.

As soon as I hit the road, I fainted. Looking at the “earthworm words” on the road sign, I was confused and stumbled into Wat Phan Tao by mistake. This small temple built of teak is quite exquisite, and I accidentally caught one of my most proud photos. 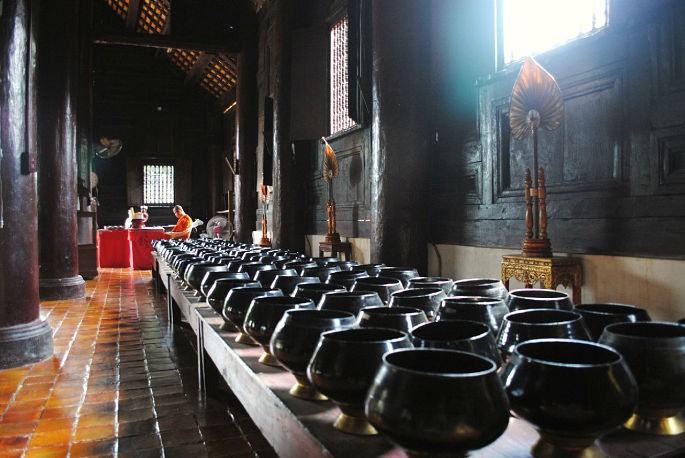 Separated from Pandao Temple by a wall is Wat Chedi Luang, also known as the Great Buddha Pagoda Temple. The tall pagoda in the temple was built in 1441 and destroyed by an earthquake in the 16th century, but it is still the most magnificent building in Chiang Mai. There are six brick elephant heads on the south side of the tower, only the rightmost one is a legacy. 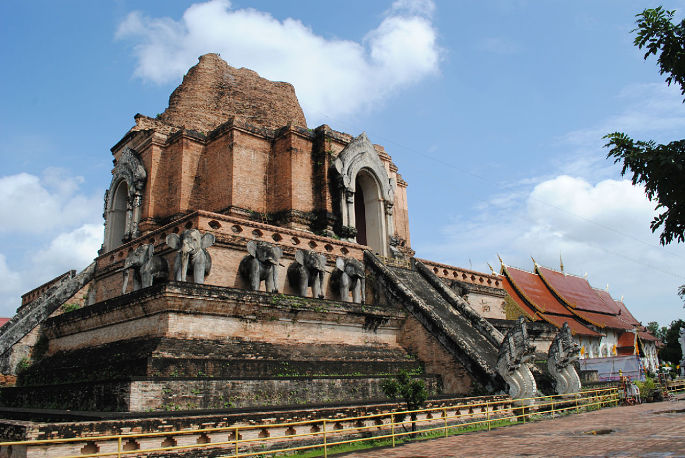 What impressed me was the golden reclining Buddha and the wax figure of the eminent monk sitting in the glass cover inside the temple, just like a real person. 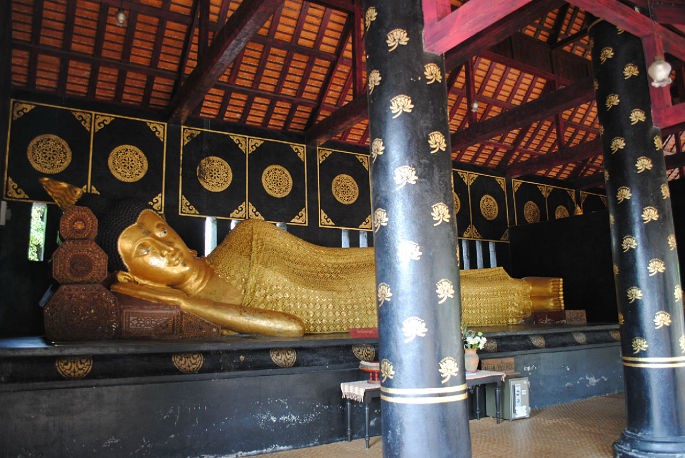 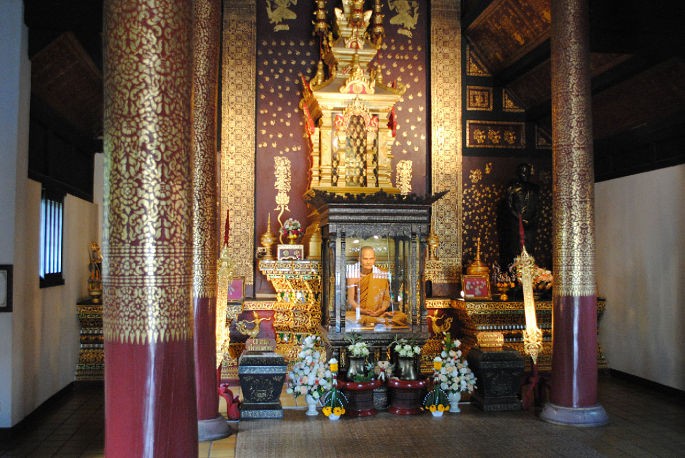 Out of the temple, there was no direction again, and I continued to stroll along the street, look at the street view and stroll around the small shop. Passing Chiang Mai Police Station, a statue in the courtyard was somewhat conspicuous. Suddenly, I remembered an old song, “Golden Shield, Cast with Blood, Show Your Skills in Distress”. 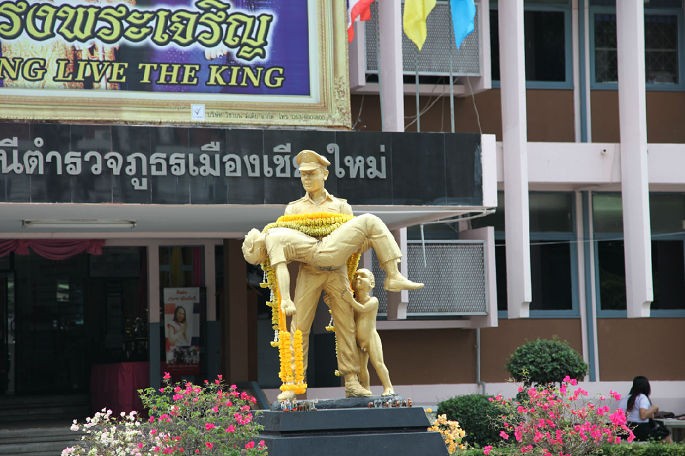 After pondering the east and inquiring the west, I finally found Wat Phra Singh. The whole temple is a classic of Lanatai’s architectural style. Exquisite wood carvings and colorful murals are recognized as the highest standard of traditional art in northern Thailand. In Chiang Mai, Pasin Temple is the highest-ranking temple and the most revered holy place. 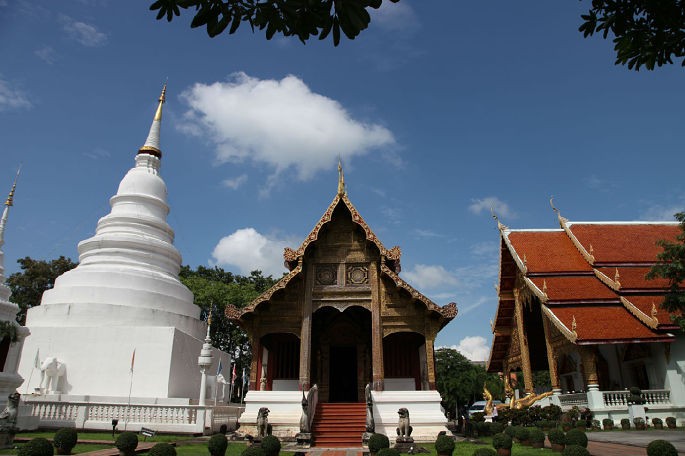 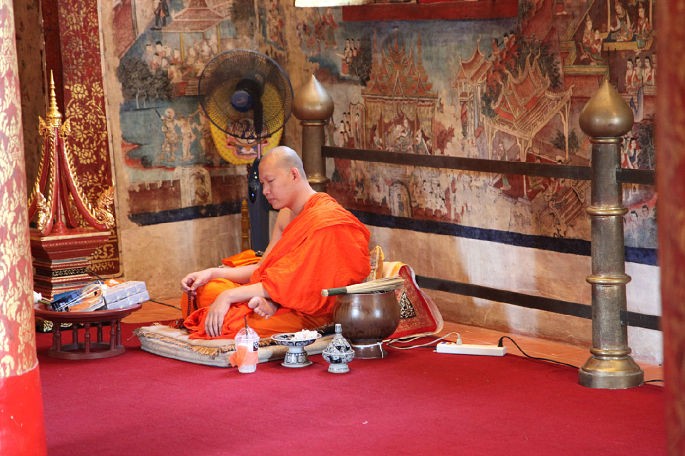 Lunch is still a sour, spicy Thai meal, and everyone seems to never tire of it. On a lazy afternoon, the hiking was changed to a chartered bus. The driver was familiar with it and took a two-car tour, which saved time and effort and was much easier.

Chiang Mai Women’s Prison arrived. There were no high walls or guards. There were only two ancient cannons and a bronze statue of a woman in front of the prison. This has become a scenic spot in Chiang Mai. People have forgotten the majesty of the prison, but they have remembered a loving female warden. 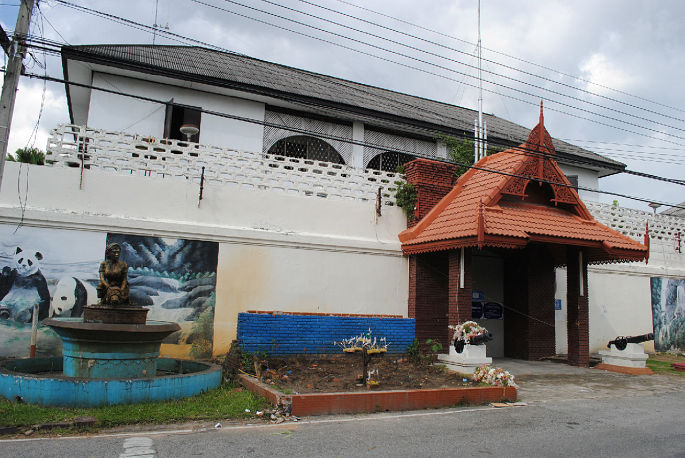 Along the same street to the east, you soon saw Chiang Mai’s famous Monument to the Three Kings. The monument was built directly in front of Chiang Mai’s cultural center in memory of three people who made great contributions to Chiang Mai: Emperor Langan Heng, King Meng Lai and King Nan Meng. We saw several monks burning incense and offering flowers in front of the statue to show their admiration. 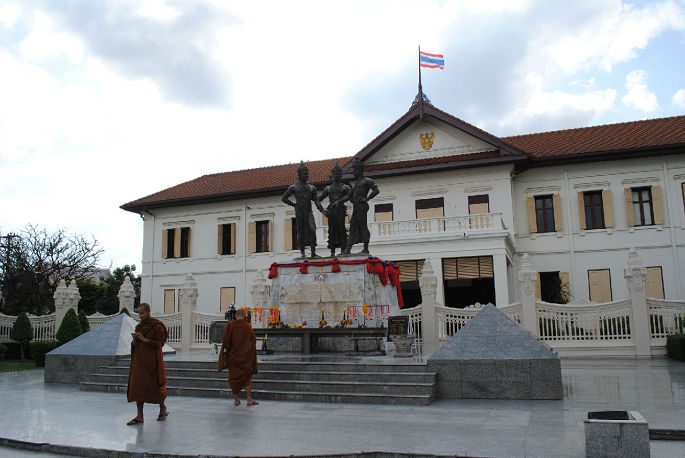 The two cars made several turns and soon arrived at Wat Chiang Man. This is the oldest temple in Chiang Mai. It was built in 1296 and was once the bedroom of King Meng Lai, who built Chiang Mai City. The Sakyamuni Buddha statue in the main hall is full of precious stones and is very precious. The crystal Buddha statue is even more powerful and can call the wind and rain. 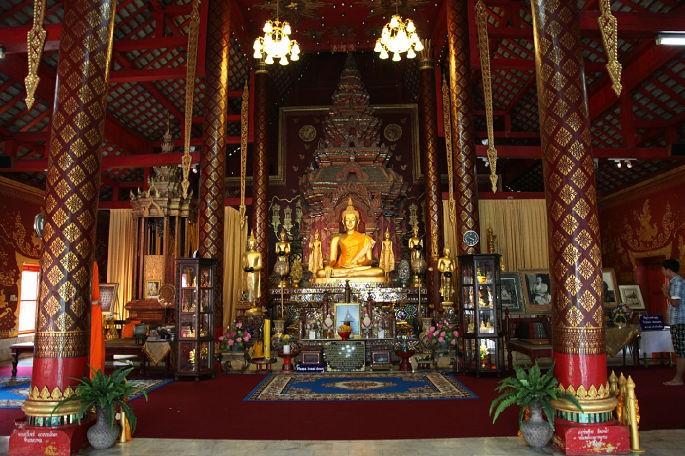 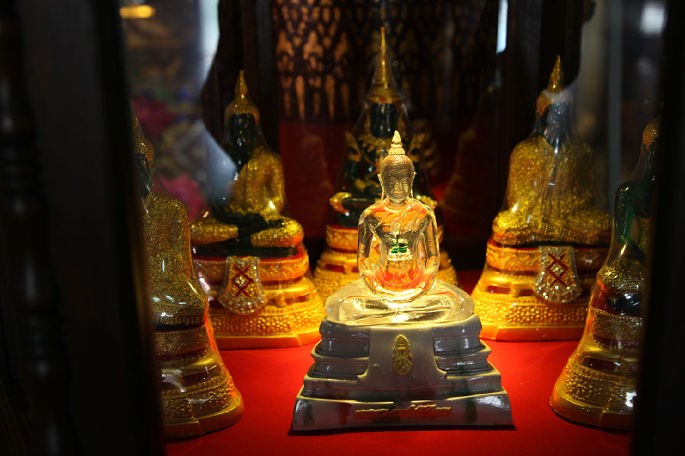 In the backyard, there is also a square pagoda surrounded by 15 elephants at the bottom, with golden spire and extraordinary momentum. 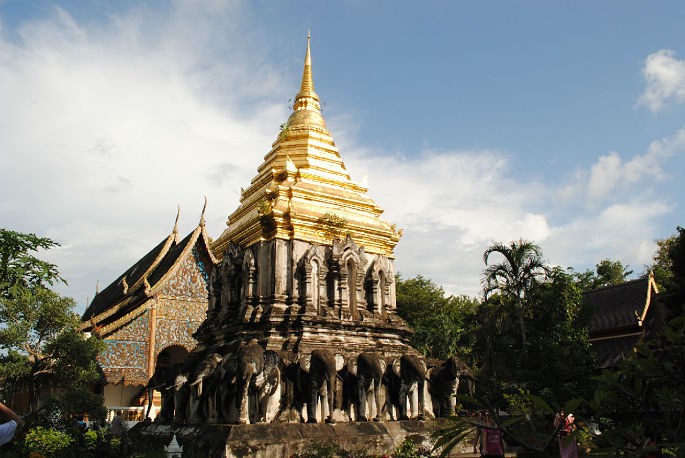 Compared with Shuanglong Temple on Sutie Mountain, the temples in Chiang Mai’s ancient city are extremely peaceful, leaving only peace and peace for tourists.

I will leave Chiang Mai tonight, and my nostalgia and perseverance are beyond words.

Pack up and rush to the bus station in advance. It is a 12-hour drive from Chiang Mai to Pattaya. We chose NCA Bus Company, Thailand’s best-known bus company, known as Land Airlines. The carriage was clean and spacious, the seats were safe and comfortable, and dinner and snacks were also provided on the way. In particular, the considerate service of the bus attendants was comparable to that of stewardesses. Sweet smiles and soft voices accompanied me to sleep.

The post-90s MM traveled to Chiang Mai alone, a journey to find himself!

Write some words and take some photos to commemorate my slow life in Chiang Mai for one month (3. Black and White Temple)