Maya Bay is more than 40 kilometers away from Phuket Island. On Little Phi Phi Island, 3 kilometers away from Big Phi Phi Island, it is surrounded by mountains on three sides and has snow-white beaches. It is famous for the movie “Beach” starring Leonardo. The beach is not large, with hundreds of meters of cliffs around it. The sea is blue and the shore is dotted with wild trees. It is a typical tropical island in the Indian Ocean.

You can take a high-speed speedboat from Phuket Island to visit Maya Bay, but you don’t have to live in Phi Phi Island. The voyage takes about one hour. The speedboat has two engines and three pairs. It is said that there are still five rounds.

A speedboat on an island 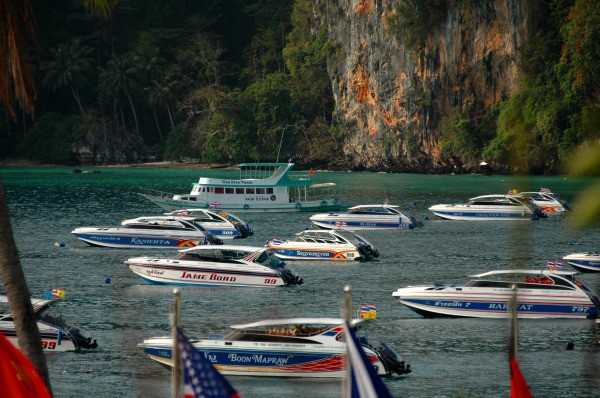 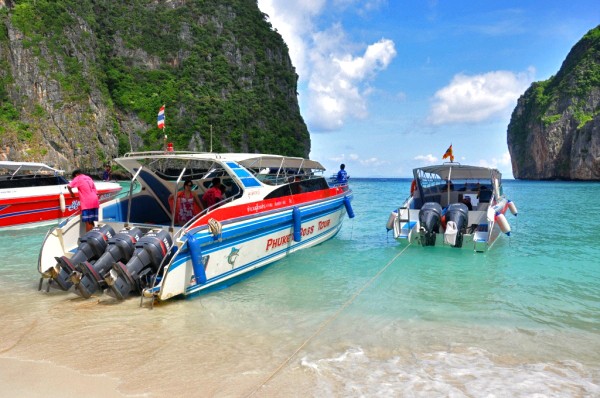 On the ferry from Phuket to Phi Phi Island, I saw a flying high-speed boat. 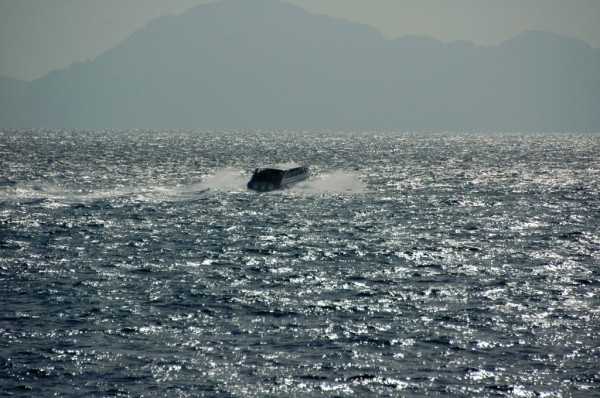 At 3: 00 p.m., a speedboat was arranged, and a group of five people went to the Mayan Bay at 1200 baht. They chose to go in the afternoon to avoid congestion. It is said that the cruise ships on the Bay were packed with people in the morning and could not even dock. January is the peak of tourism on Phuket Island. Several famous beaches were noisy and crowded. The excitement was comparable to that of Nanjing Road Pedestrian Street in Shanghai. After landing at Phuket Airport from Bangkok, they could not get to Hong Kong. They waited on the plane for 45 minutes. When leaving Phuket, they queued for an hour at the airport for exit inspection. A large number of Europeans took direct flights back to Copenhagen.

It is true that there are a little fewer people in Mayan Bay in the afternoon, but the sun has passed overhead and the shooting of the Bay has turned against the light. The rush hour was full of speedboats, and the latecomers could not reach the shore yet! 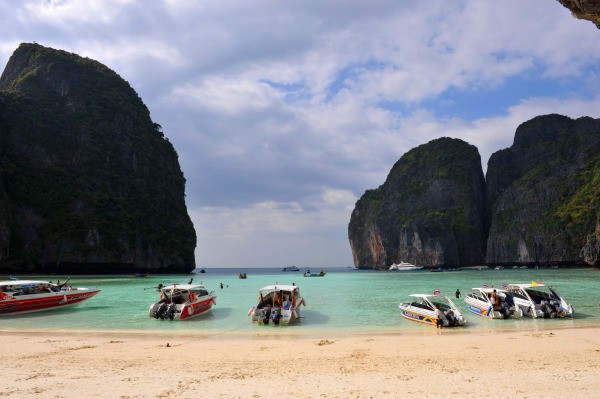 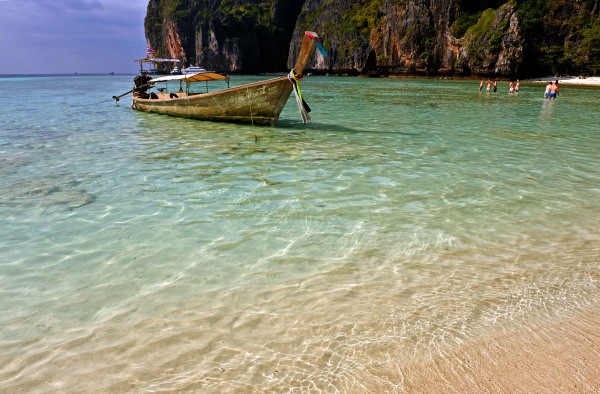 Maya Bay has a U-shaped pocket with a small mouth and can only be entered by bypassing the cliff. 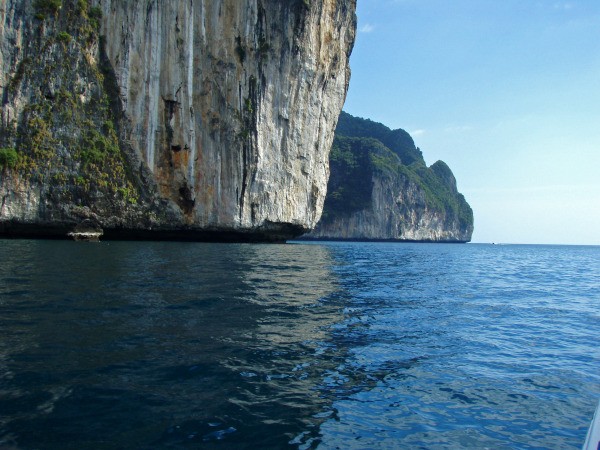 At ordinary times, the cliff is also very stormy. 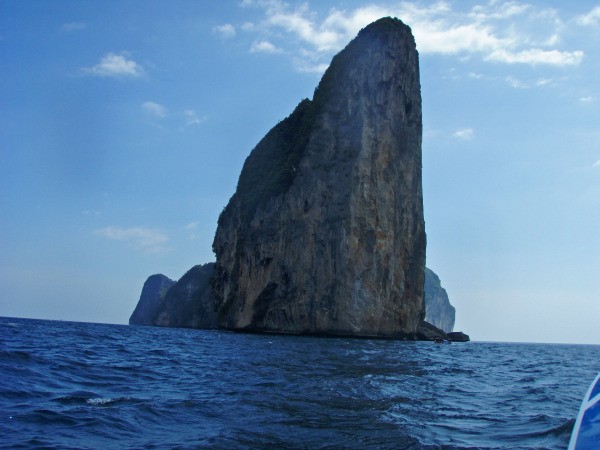 Forgetting feelings in the beautiful Mayan Bay, unconsciously dripping a few cool raindrops, the western sky was overcast, the fat speedboat captain softly reminded: back? Back? Looking west out of the bay, dark clouds are rolling. 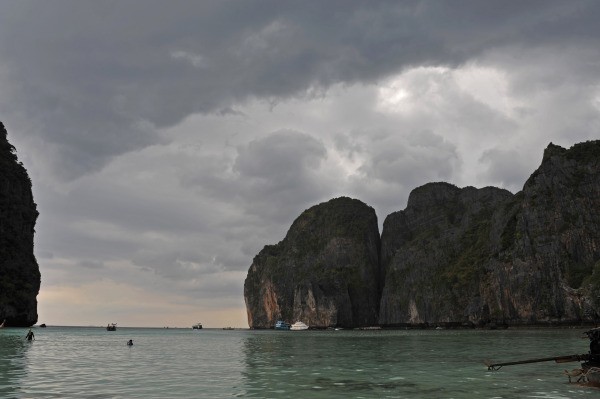 Leave Maya Bay and look back at the beautiful beach. 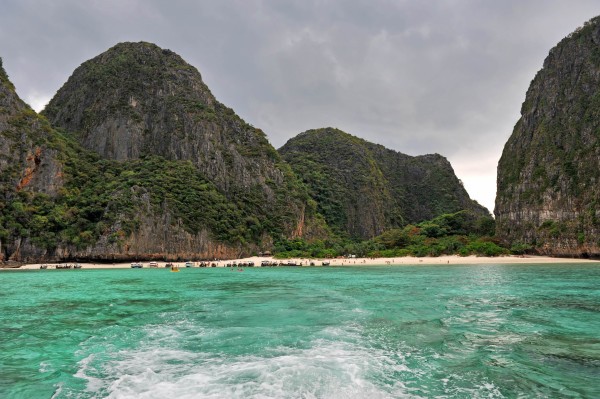 Hurriedly boarded the boat and returned home. When crossing the headland, the wind and rain suddenly came, The waves are surging, Looking at the depths of the ocean, dark clouds are connected with the sea. The sound of the speedboat’s motors roared with the sound of the wind. Turning over the cliffs of Little Phi Phi Island, Hearing a loud beep, The windshield in the front half of the speedboat was covered with what’s things. Looking back at the dark sea that had blown tens of meters away, the fat captain stopped the ship quickly and seemed to want to retrieve it. However, a gust of wind and waves disappeared. The speedboat shook badly. The captain righted the crooked warning light in the middle of the speedboat and rolled down the broken tarpaulin. He also righted the steering wheel from time to time. I am worried that he will not drive back to find it!

The speedboat, which lacked the wind and rain canopy, continued to return, slowing down its speed obviously, but the fierce wind splashed in like water arrows on its face and its eyes could not be opened. On the right is Xiao Phi Phi’s frightening cliff, and on the left is the darkness connected by the water and the sky. It makes me fall into an ice cave. My hair is creepy and I am extremely frightened. I am afraid of being buried in the belly of the fish, especially the three-year-old little grandson wrapped in a big towel on the boat. Although I was nervous, I didn’t forget to take a picture of this scene, but the waves crashed into the speedboat with loud bangs, and the top jolted violently. I grabbed the hurdle with both hands to avoid the top of the speedboat, and I couldn’t even open the waterproof bag to take the camera.

The speedboat turned into Phi Phi Island Bay. The wind and rain gradually stopped and the sky was bright. It hurried ashore. It was not forgotten to take a souvenir for the speedboat and the fat driver, which was also the record of the 20-minute sea panic. Now the memory is still afraid. 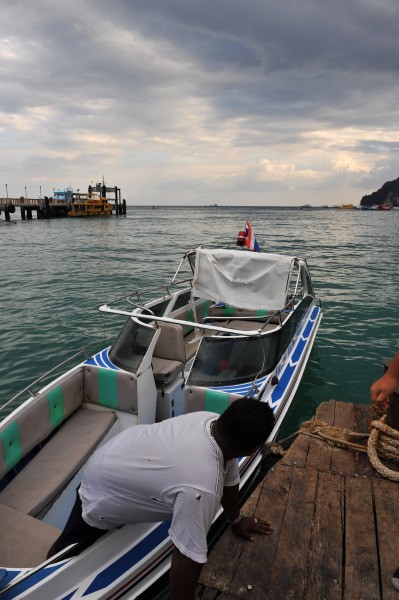 Nowadays, tourism has become a fashion, and tourism accidents are increasing. Ships that spend the night at Ha Long Bay will be wiped out, ships on Mekong River will sink, mountain climbing will fall to death, and road accidents will occur from time to time. In the face of accidents, in a word, we must pay attention to safety! In addition, it is impossible to prevent, don’t forget to buy insurance, and finally pray: God bless!

Six months ago, the sea was in panic, and what could not be swung away was the towering shadow of this cliff! 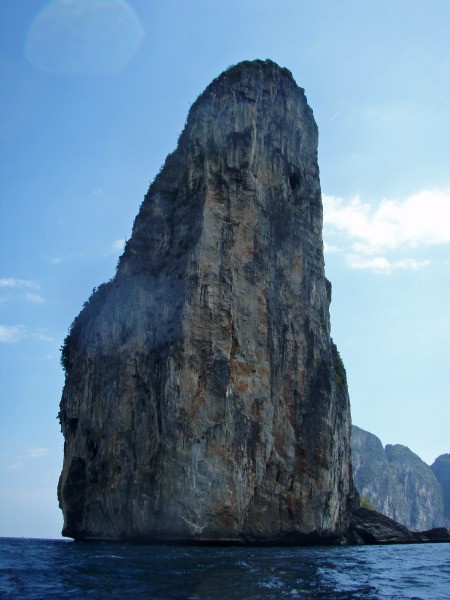