Lotus, and smile–one more day, in the city of roses

The morning sunshine seems to have been washed in clean water. Spread out your five fingers and your palm is full of sunshine and air from Chiang Mai.

Sunlight filters through fingers, just like it filters through railings and leaves. Shadows will surely be left on the ground. However, who will feel shadows in the sunshine at seven or eight o’clock will always automatically cast their eyes on bright things in the morning.

Air exists, not wind, air is invisible. I feel it is not because I am breathing, but when I am walking, my steps are light, and I can still feel the special fragrance of plumeria gently brushing over with the grass leaf fragrance soaked in dew. The fragrance is tactile and has soft tentacles similar to climbing vines. Plumeria is on high, inside and outside the wall, white, orange and red, the color distribution is just right, elegant and warm. Whether it’s white or orange flowers, dark hair will be more beautiful. Tropical islands, women with chocolate skin color wearing flowers, black hair and waist, look back and smile, black and white eyes, smile like to overflow from the picture, flowing out. Where did you get a card when you were a child? There was such a beautiful woman wearing flowers on the picture. After collecting for a long time, when I saw plumeria, I remembered my beauty card again. Southeast Asia is popular and can run all over the streets wearing flowers. It has not been regarded as the danger of “anthomaniac”. 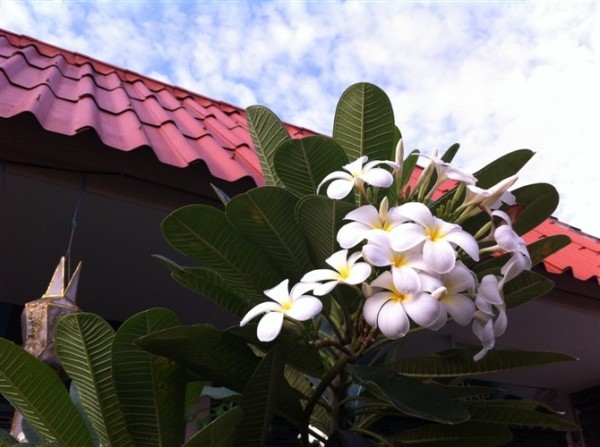 The sun shines and the plumeria is refreshed. There are also other flowers, some of which cannot be named, lotus and morning glory. The colors here are bluer and purple, and pink clusters do not know whether they are called Eight Immortals. East-west alleys, walls, courtyards and corners have flowers, trees and luxuriant winding vines. Without these flower trees, the streets of Chiang Mai would have been more lonely. There are various ancient towns in the water villages in the south of the Yangtze River in China. There are more tourists than in Dali and Lijiang in the west. The ink and wash alleys are still quiet. It is only because the people there do not like to grow flowers in front of their homes.

On the last day of Chiang Mai, I didn’t go anywhere. I spent an ordinary day in the ancient city, starting with watching flowers.

Early in the morning, I was awakened by the strange rooster crowing. I still remember wondering, “Why is the rooster crowing here so strange?” It was not a clear long sound, but a short one, like being grabbed by the neck and leaking gas. Although the rooster’s name is different, dawn also keeps its promise.

Dawn and sunshine come together. Put on your favorite white blouse, mint green skirt and tie a braided hair, feeling like half a local. Since others said I had lost weight, I also found myself losing weight, so I had more fun traveling: I used to go out with TEE and jeans, but now I can wear them in different styles. Walking on the road in a skirt feels very different, as if the world has become lighter. Walking alone into the alley, I got up late and did not encounter the scene of giving alms. I only saw the free and easy back of a few monks, who were walking back to their temples. The students in school uniforms just set out to go to school. I followed several monks into an alley. In an instant, the monks disappeared and there was another temple in front. 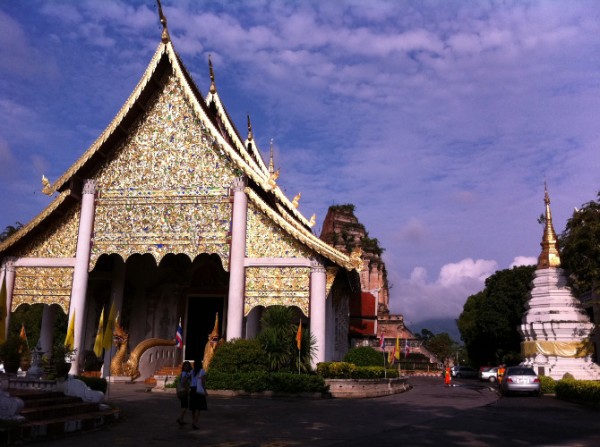 There are various temples in Chiang Mai. Golden walls, white columns, white towers; High spires, complicated and exquisite patterns, colorful inlays, gorgeous and unreasonable, like paintings. Not only that, the new and old traces are woven together. The old is like a fire, the statue turns to smoke gray and ochre red, and the new is like gold and silver coins polished many times, sparkling. Chiang Mai’s temples prefer purity in color, but you cannot deny its dignity. The statues of the young monks meditating on the path have nothing to do with this solemnity, but rather look joyful, just as joyful as those small statues outside the houses and in the inns.

In every corner of the ancient city, there are small clay statues sitting on the ground. The little monk smiled, the little girl smiled, the old woman wearing flowers smiled, the elephant smiled, and the pig smiled. If I stand in the street and laugh, I will not be regarded as a fool, because I am not laughing alone. 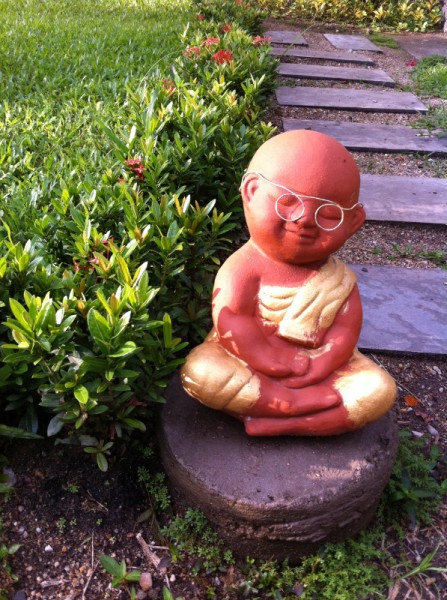 In a strange place, just take an ordinary walk and eat an ordinary breakfast. Last year on BALI Island, tourists from the hotel came and went with the group. They did not even know that a few steps away was a beautiful beach surrounded by huge cliffs. They leave early and return late every day to watch different beaches and seascapes. If they stay one more day, if they can walk a few more steps along the road in front of the door, they will not miss the beach. On the contrary, the latest ones are easy to miss, and it is still the case in the distance.

It is best to arrange “one more day” for one’s own travel. For one more day, there is no schedule and no plan. Staring blankly, walking, walking at will.

Hungry, just find a small restaurant on the street and go in and have a bowl of soup and rice. There may be people at the next table to greet you. They are also not Thais but Burmese. He thinks you are more like a foreigner than he is, so he enthusiastically takes the initiative to act as an interpreter for you and the owner. Such a bowl of soup and rice has a different taste. At noon, the sun is poisonous, and you can hide in the SPA hall to enjoy essential oil and skin care. The traffic on the street seems to be very far away. The melodious music sends you back to the jungle. The fragrance lingers and you can take the opportunity to take a good nap.

In the evening, as refreshed as the early morning plumeria, I walked to my favorite temple. Sit on the green wooden chair and watch the sunshine fade away. . . Summer was originally long, running south, and summer came back. 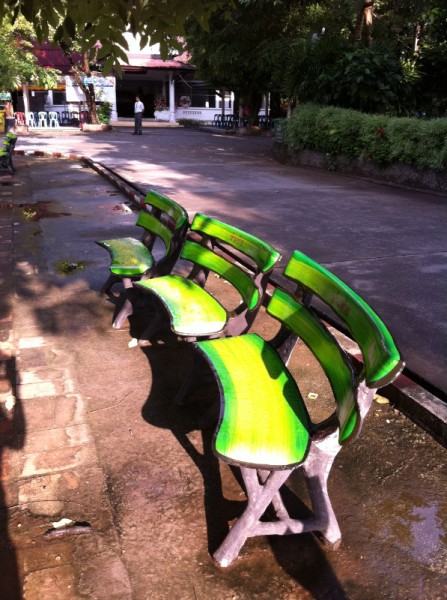