It was just 2: 30 p.m. When the hotel was fully settled, much earlier than expected. I took a quick shower and went out. According to the prior plan, our arrangements in Bangkok are mainly the Grand Palace, the Jade Buddha Temple, the Sleeping Buddha Temple and the Zheng Wang Temple. In the evening, we will take a cruise to the Chao Phraya River and take a day to the big city more than 80 kilometers away from Bangkok. Time is limited in the afternoon, so we must hurry to the Zheng Wang Temple on the other side of the Chao Phraya River and then go to the legendary Kaoshan Road in the evening.

Taking the map provided by the hotel and asking about the southeast and northwest directions, we couldn’t wait to walk towards Zheng Wang Temple. According to the Thai travel brochure published in China, the opening time of Zheng Wang Temple is from 9: 00 a.m. to 4: 00 p.m., If we can’t make it to the opening time, we may not be able to go to Zheng Wang Temple, because although we have three days in Bangkok, one of them will go to the site of the World Cultural Heritage City. If Bangkok’s Grand Palace scenic spot needs to be visited seriously, it will take at least half a day, and we also want to go to Thailand’s National Museum, so the time is not rich at all.

After turning right from the hotel gate and walking about 100 meters, you can see the canal. The canals in Bangkok criss-cross, adding color to Bangkok. Crossing the small bridge on the canal, the scenery on both sides of the canal is already very Thai. 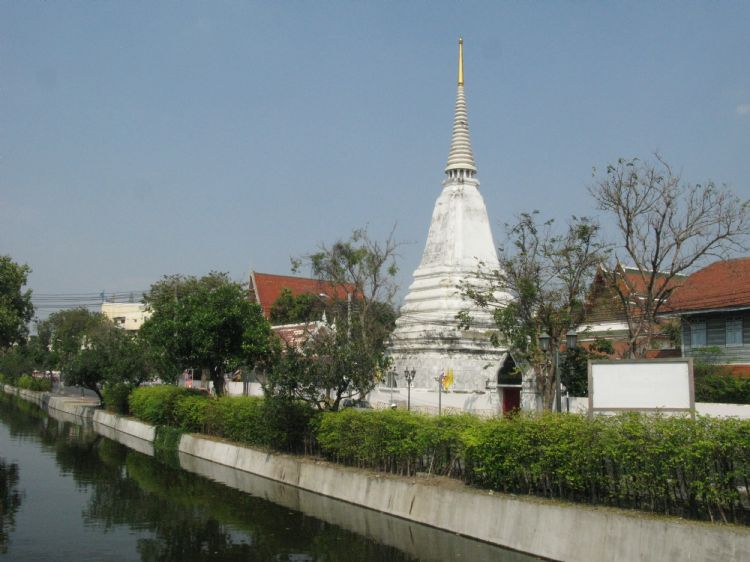 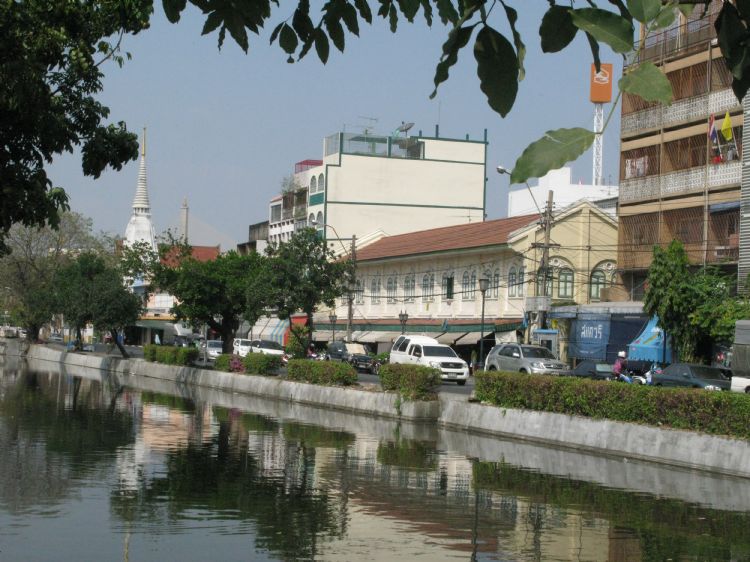 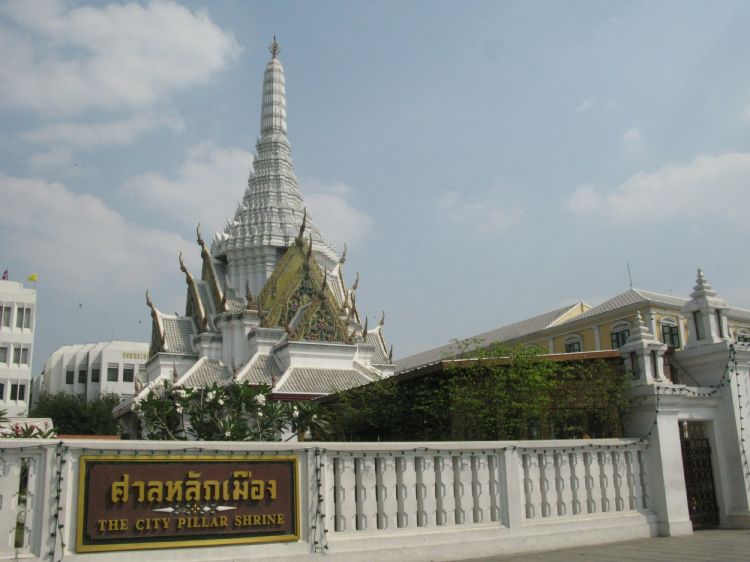 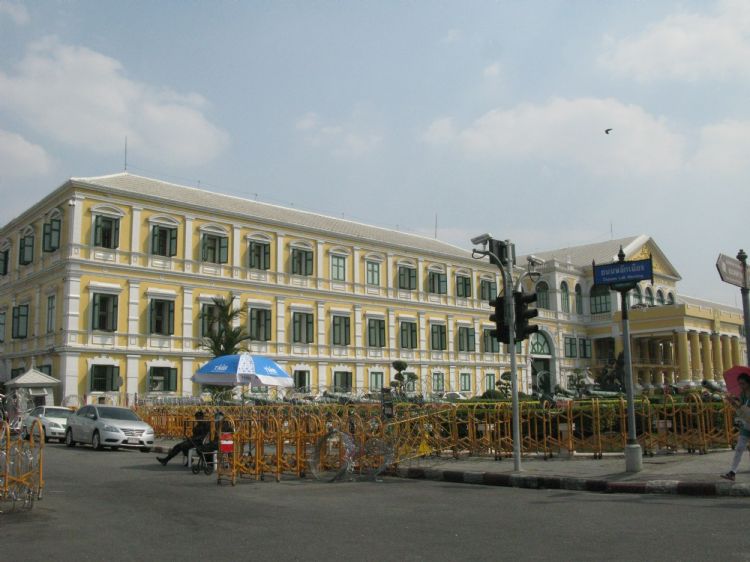 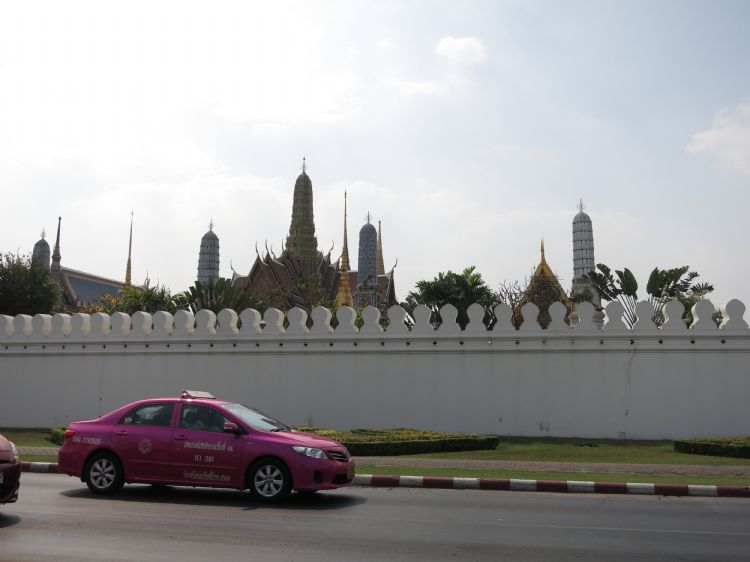 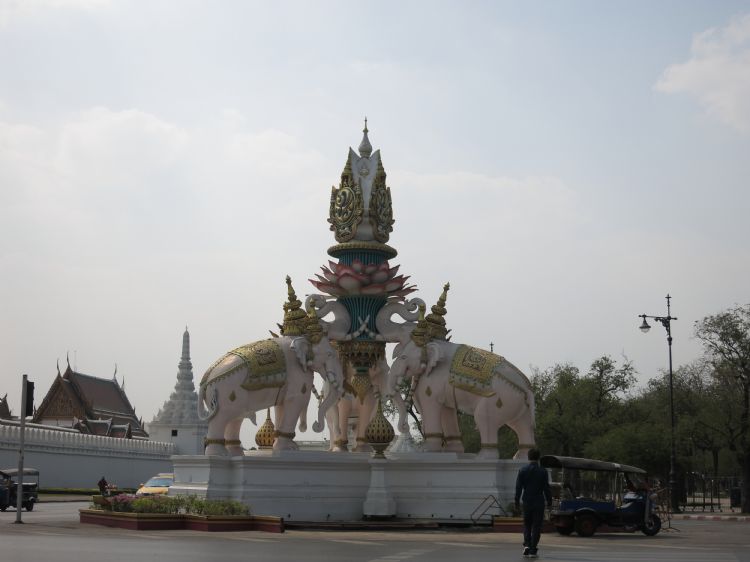 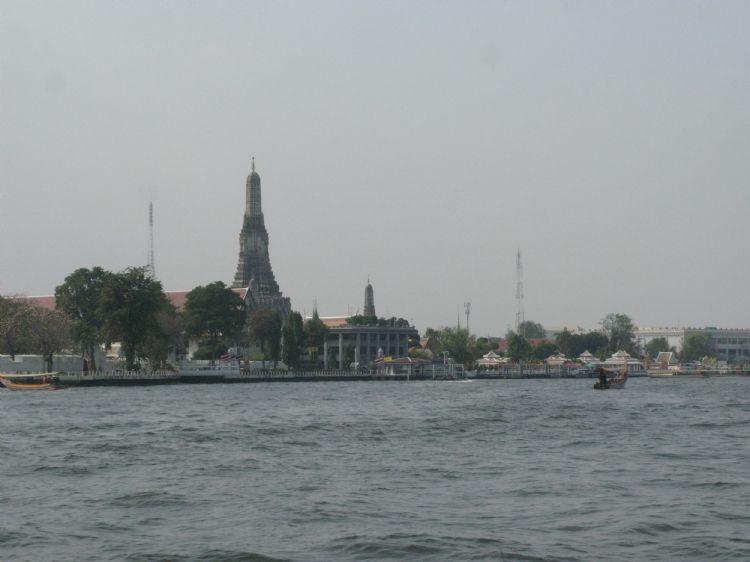 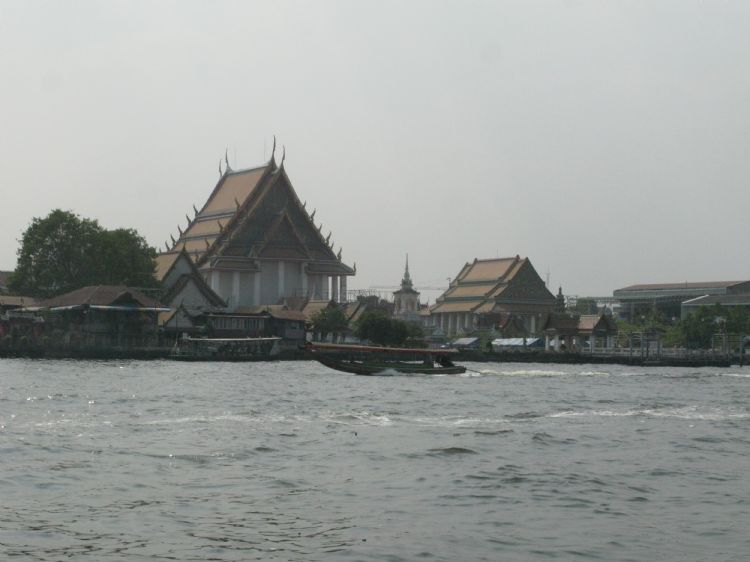 After getting off the boat, I passed through the narrow alley. Suddenly, my eyes brightened. A tower appeared in the middle of the street. The buildings around the intersection were very beautiful. There are several taxis at this intersection. After asking several, they are not willing to play their watches. They cost 300 Thai baht to go to Zheng Wang Temple. Looking at the map in his hand, he really didn’t want to spend 300 Thai baht and crustily skin of head to ask the man in uniform next to him. He asked me the taxi driver’s asking price before telling me the way. From the “enthusiastic” guide just now to the taxi driver and security guard in front of me, why do Thais feel so unkind? After knowing that we were Chinese, the security guard was very friendly and wished us a happy Spring Festival. Then he agreed that we would pass through the temple that was being repaired and was not open to the outside world, so that we could get closer. I really should thank him very much. By the way, we took some photos of the temple outside. 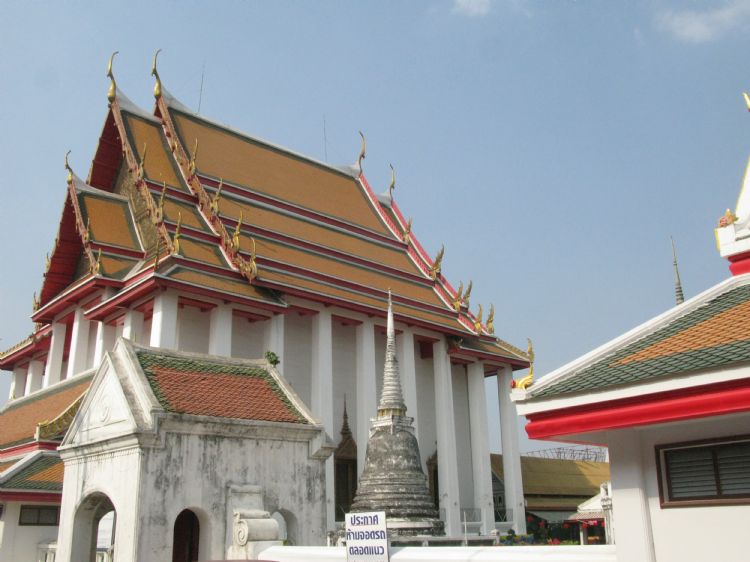 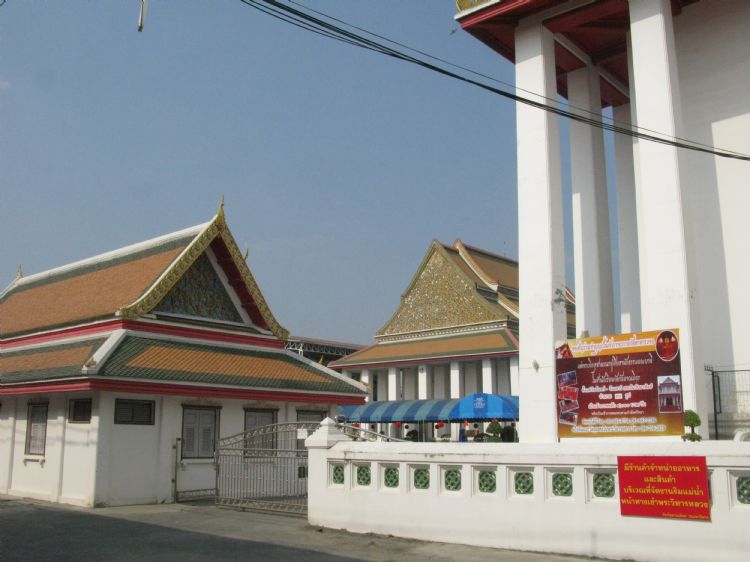 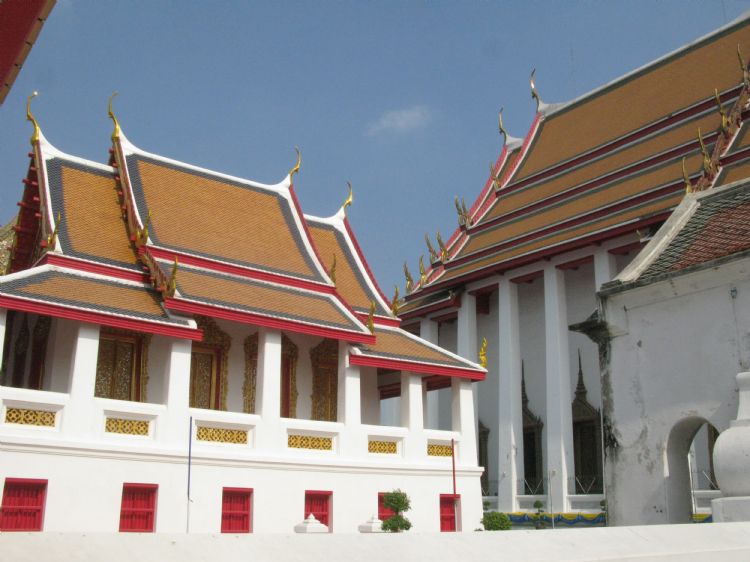 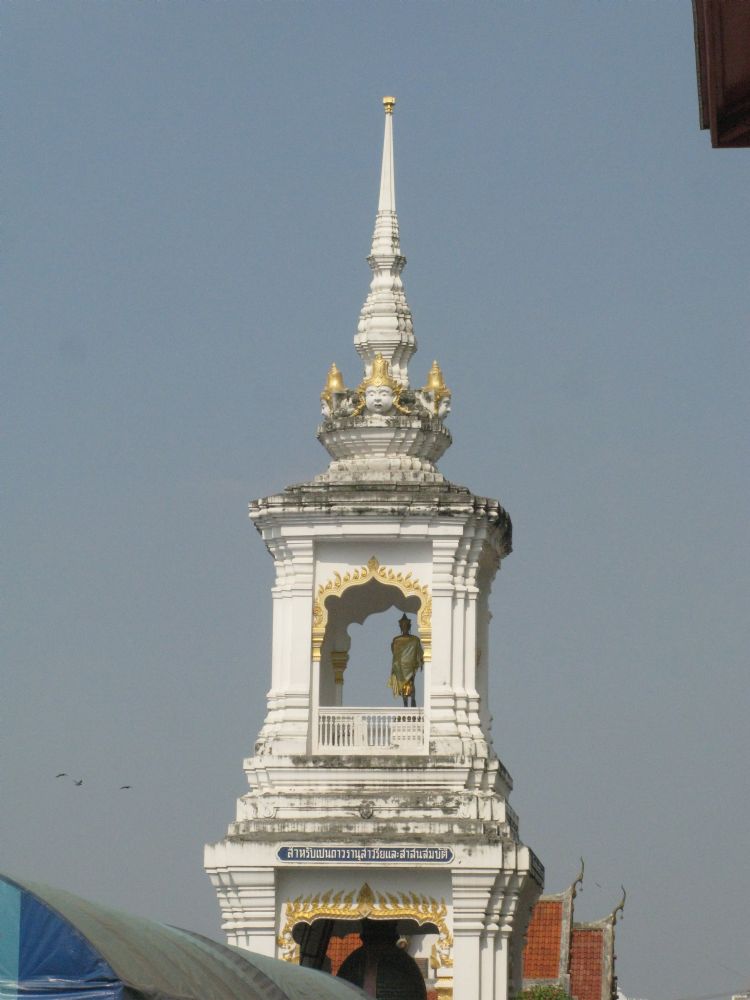 There are also such beautiful buildings in this alley. 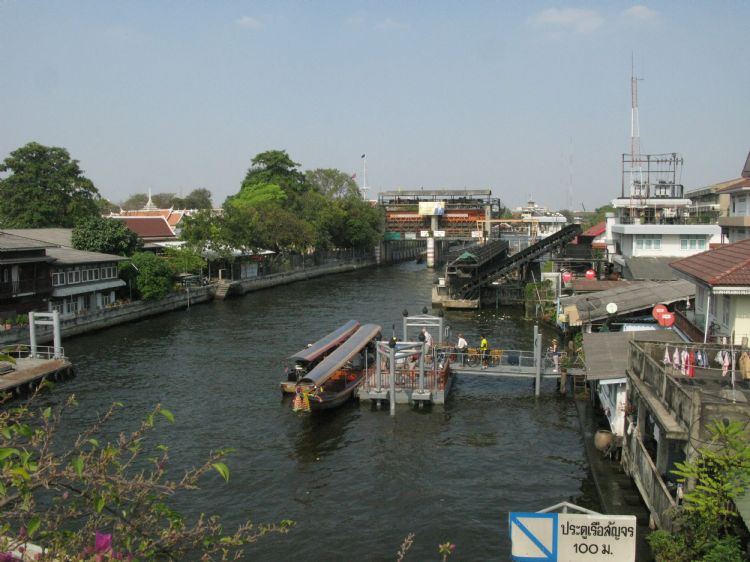 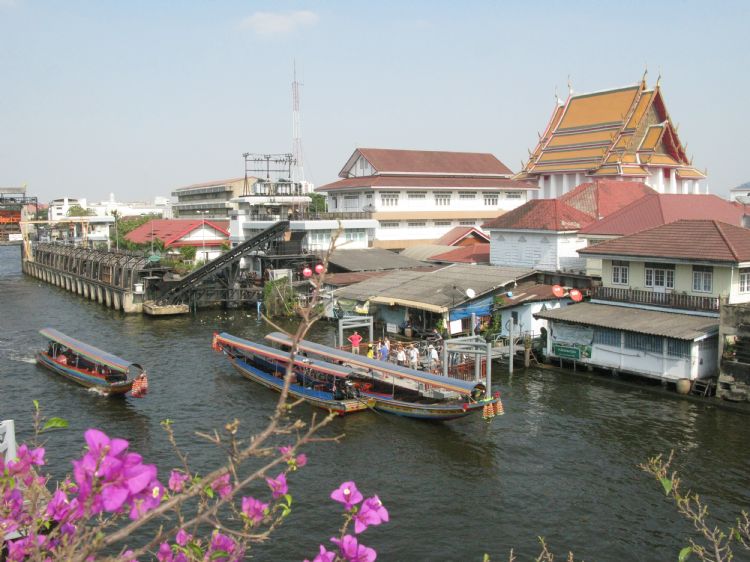 The road pointed by the security guard is very close, and the canal bridge is at the end of the alley. This canal is also one of Bangkok’s tourist attractions. Many tourists visit the canal by boat. We mainly don’t have enough time and want to swim the Chao Phraya River, so we don’t want to take two boats. 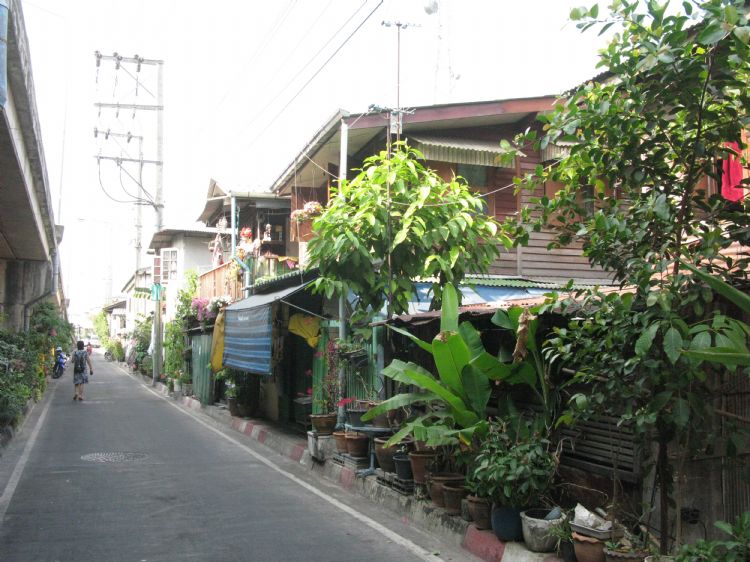 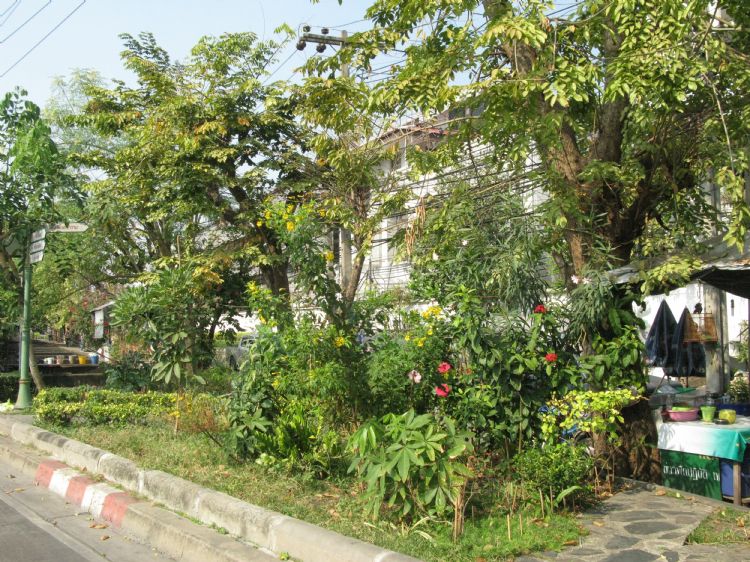 The houses on both sides of the streets of the small town are very low but clean. 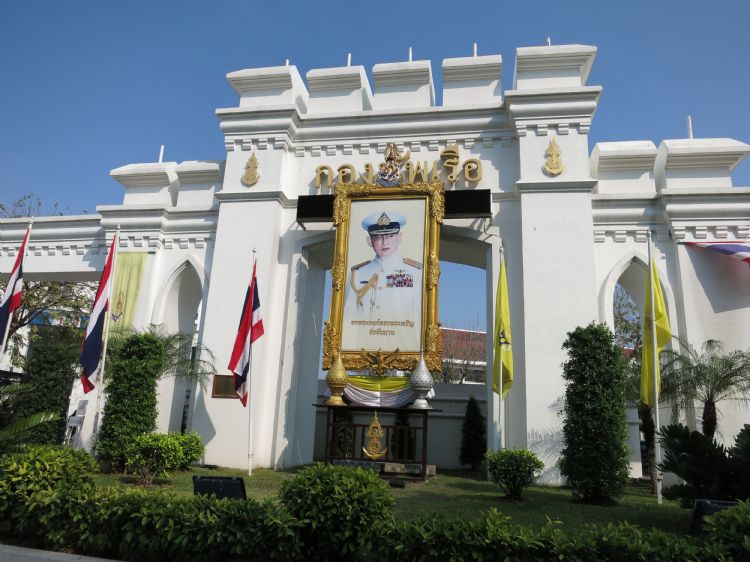 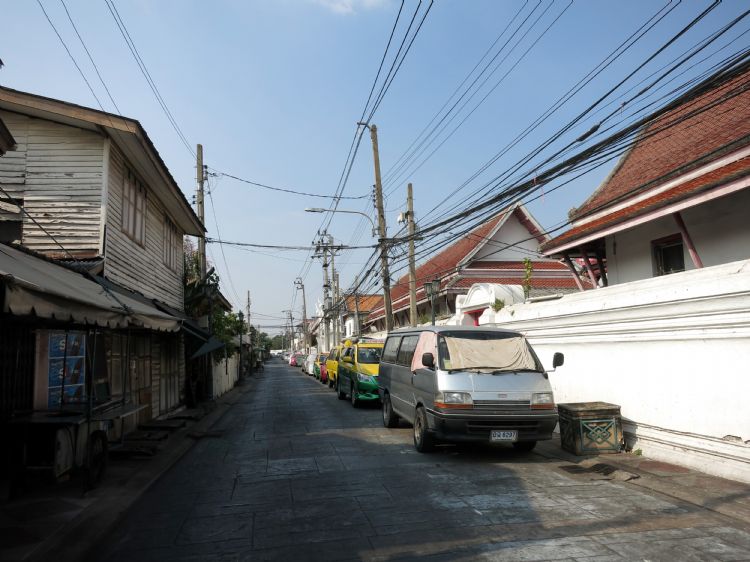 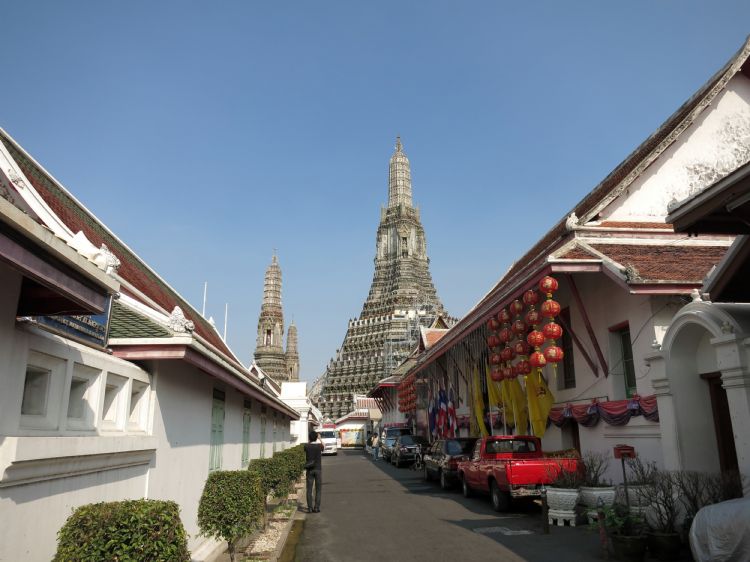 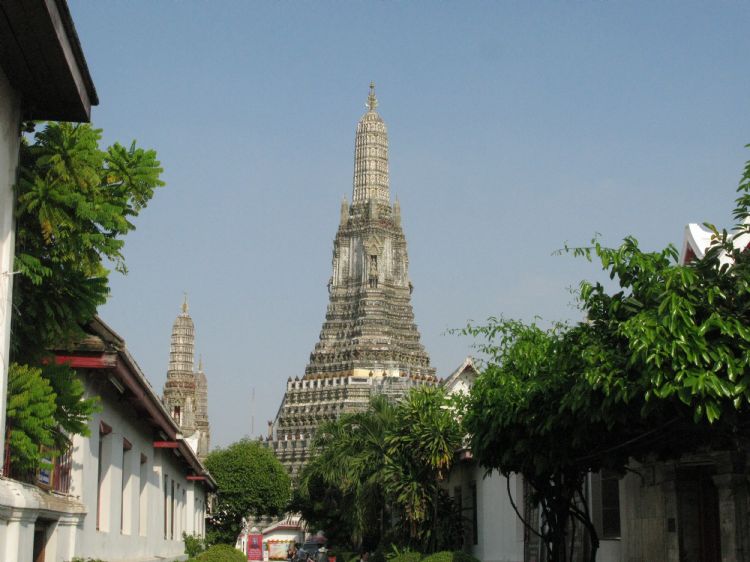 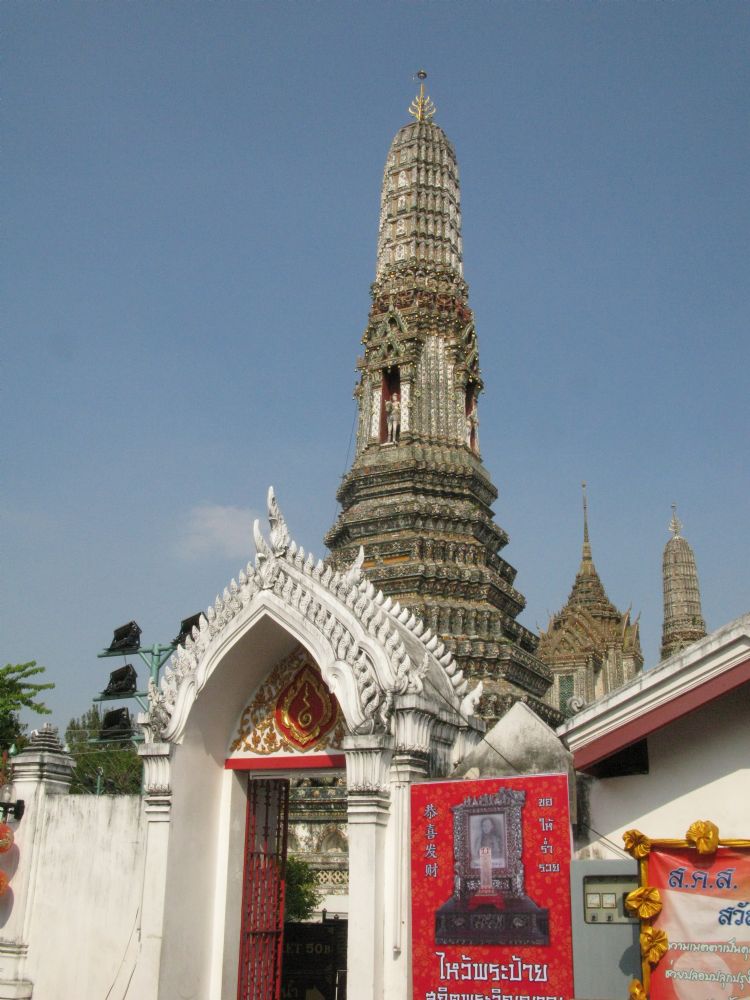 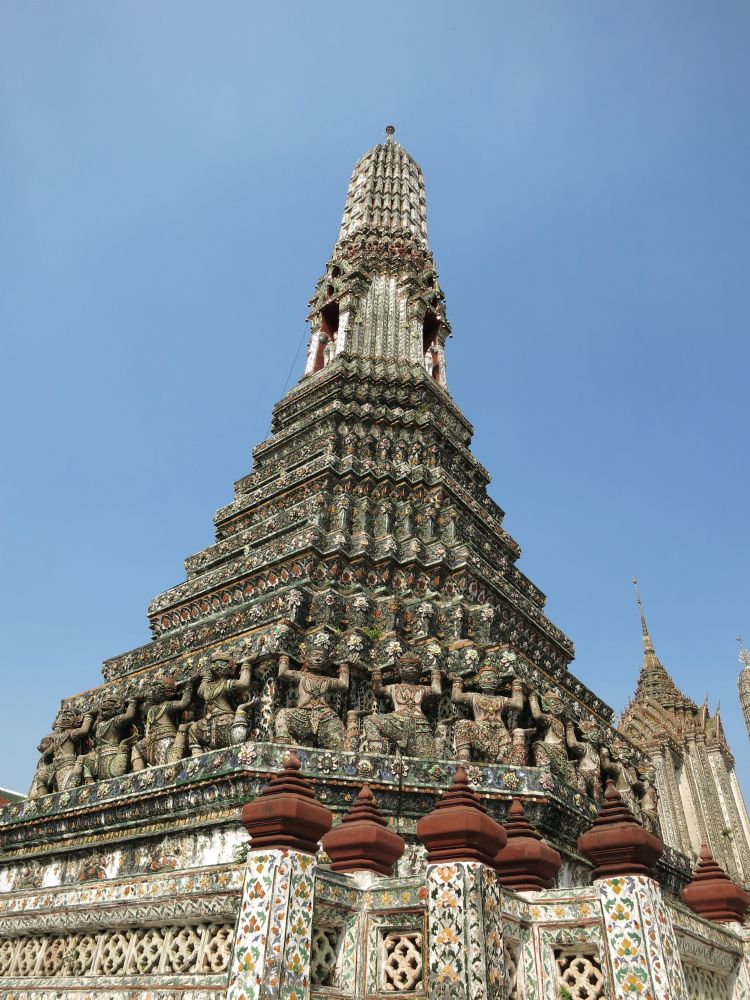 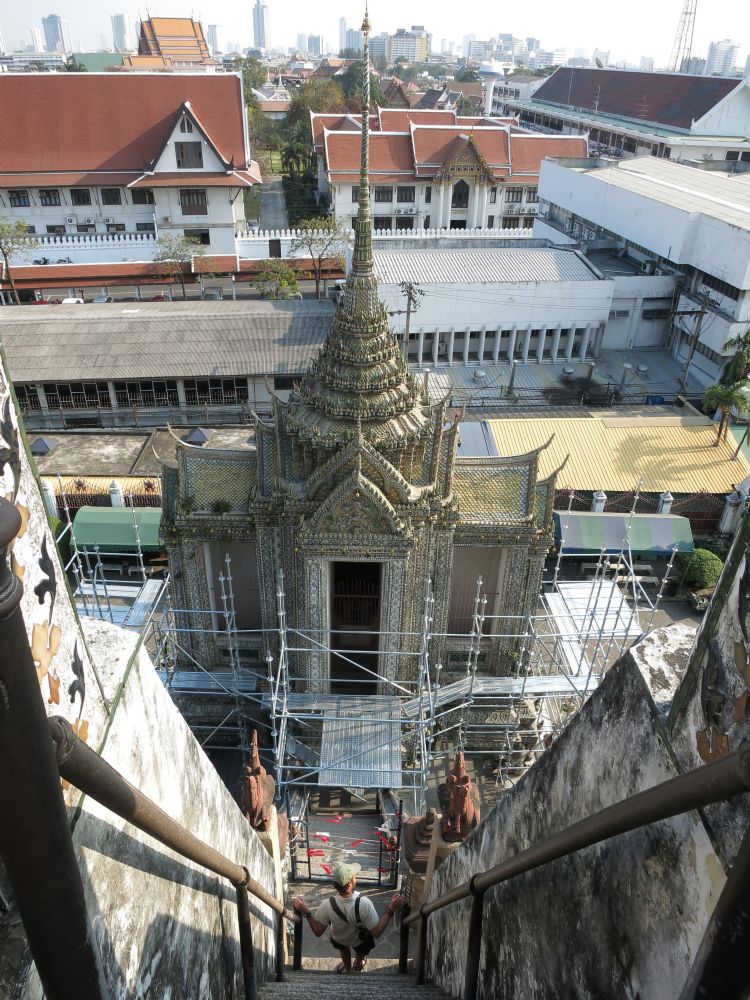 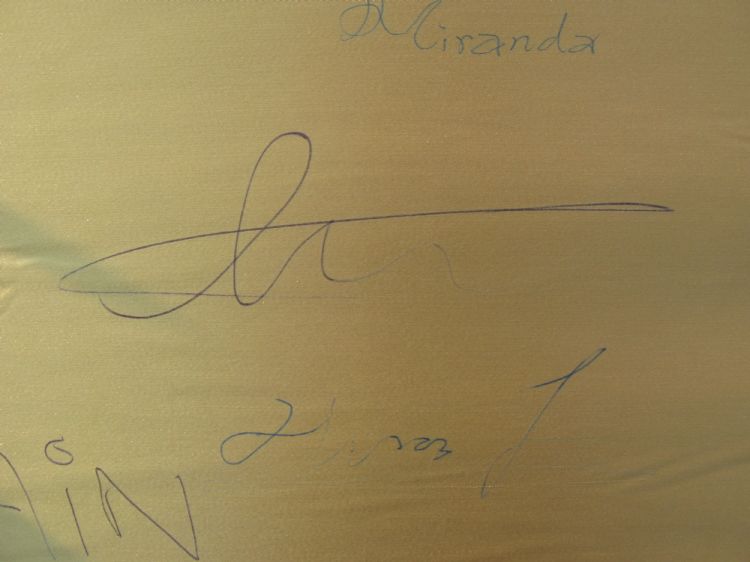 Standing on the platform overlooking the Chao Phraya River. 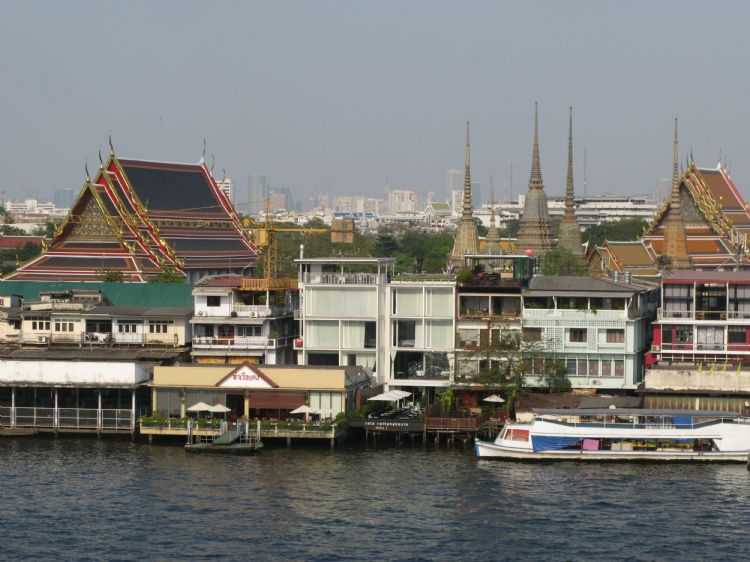 The magnificent grand palace and the Jade Buddha Temple. This is an organization, not a temple, but the architectural style is very similar to a temple. A square outside Zheng Wang Temple has a strong religious color. Many believers will rest and learn Buddhism here after worshipping Zheng Wang Temple. This is the ferry terminal located on the side of the Grand Palace. There are restaurants and shops on the water surface, but the Chao Phraya River is especially dirty and there is a lot of garbage floating on the water surface.

Perhaps it was because of the sudden arrival from cold Beijing to hot Bangkok that there were two minor problems in the afternoon trip. The first problem is the heart. When I arrived at Zheng Wang Temple, I would climb the tower. As soon as I climbed the first platform, my heart beat very fast and I felt very uncomfortable. At that time, it was estimated that there might be two reasons. One might be hypoglycemia. After we arrived at the hotel from the airport, we came out without lunch in order to catch up with the time. Originally, we thought that we could definitely buy food in tourist attractions. In fact, this is not the case in Bangkok. Food cannot be bought in tourist attractions, which is very different from the excessive commerce in tourist attractions in China. I immediately went out to find food and walked a long way before I bought Coke on the side of the road. After drinking a bottle of Coke, I insisted on climbing to the tower. It would be a pity if I didn’t go up. The second reason may be that I am too tired and suffer from severe insomnia for a long time before I leave due to various reasons. Another problem is caused by shoes, because the shoes don’t fit and the toes are blistered. This is the first day. If the feet are broken, you can’t play at the back. Go to find Band-Aids immediately. Fortunately, when she asked the shoe seller where she could buy Band-Aids, she immediately took me to a small shop, gave me two Band-Aids and paid the fee at the same time. When I wanted to give her money, she resolutely refused. Thais are still really kind. Coming out of Zheng Wang Temple, I originally planned to go straight to the place where the yellow shirts demonstrated to see the excitement. In order to change my shoes, I had to go back to the hotel first. The excitement of the yellow shirts was not seen.

Conservative and Open: Thailand, are you a country in how?