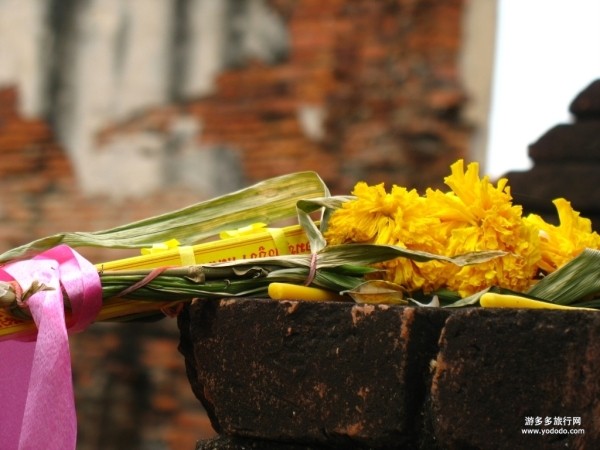 The Burmese burned down the imperial city 600 years ago, and the prosperity of the Ayutaya dynasty fell. The broken red brick wall reflected the gray twilight, and the sunset was askew on the pagoda, a desolation that could not be said. We walked carefully in the meantime. The Burmese not only ransacked the imperial city, but also cut off the Buddha head in WAT MAHATHAT. However, this unforgivable evil deed has made Ayutthaya’s unique “tree embracing Buddha”-in those days, the Buddha’s head tumbled under the Bodhi tree and was tightly entangled by the root of the tree. More than a hundred years later, this magical scenery was formed. The Thai people’s reverence for Buddhism and Buddhism makes people respect it. Under the Bodhi tree, I knelt quietly in front of the Buddha and felt very calm. Although I can’t understand the desolation after Ayutaya’s downfall, I can see from Buddha’s face the calm and calm ability to detach myself from pain and sorrow. I don’t understand Buddha; However, I suspect that such a spirit is undoubtedly strong and vigorous. It can transcend all material forces, influence evil, protect the good and give the living endless strength. This is faith. In Myanmar, there is the Buddhist city of Ganpu, a holy place that claims to have 4,000 pagodas. Judging from the documentary, the golden light spread on thousands of pagodas in the morning, and the scene was very magnificent. However, they are also Buddhist countries in Southeast Asia, and they are neighbors to each other. Why do you take the head of another country and destroy the Buddhist temple of another country when respecting gods and praising Buddhas in this country? Is it true that if one crosses the national border, Buddha will not be my Buddha and all will enter into different numbers? I don’t understand. If there is only such a mind, Buddha is not Buddha either. In any case, one day we must search for Gampu, Myanmar. It is also because of this thirst for concrete cognition that we walk again and again. 2008-02-11 The name of Simon Show on Phuket Island has long been heard. Seeing it with one’s own eyes, it is true that their Lady boy is called a beautiful girl! Don’t talk nonsense, let’s get on the photos first. 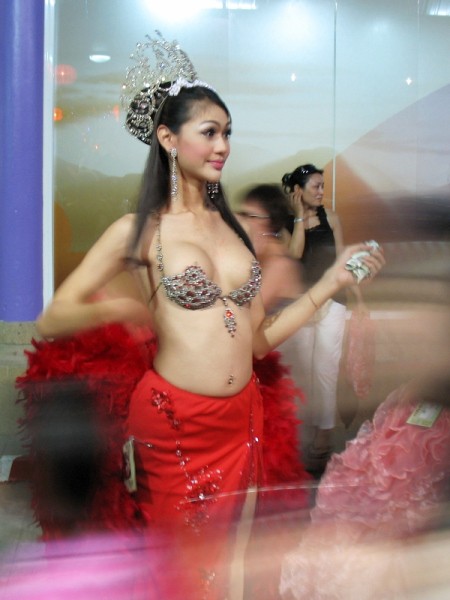 Looking at Lady Boy’s enchanting eyes and provocative posture, I can’t help but wonder: Why are there these goblin-like wonderful creatures in this Buddhist country? What we can see is the flashy costumes in front of those people. Who knows the distorted life behind them? When watching the performance, I felt pity for them. However, this pity vanished at the moment when they forced the guests to charge for photos and looked up with a fake smile and bowed their heads to count the money. Perhaps they have become accustomed to the curious and lecherous eyes of the guests and to hugging the hand holding the bank notes. Perhaps their hearts no longer have human feelings-neither men nor women, why talk about marriage? Or from the day when I was sensible, I knew that life was no longer in my own hands and it was useless to regret. Therefore, I’d better take it easy. Therefore, they, who have experienced great joy and sorrow, are perhaps the group that can pick up and put down and see through the world of mortals. I always feel that compared with the ordinary life of being swayed by considerations of gain and loss all day long and being mediocre and plain, they are really simple in mind and have nothing to fear. If these poor monsters convert to Buddhism, they may be the most devout believers.