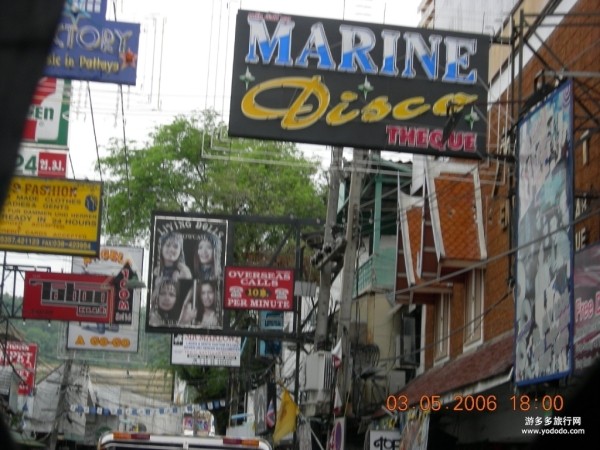 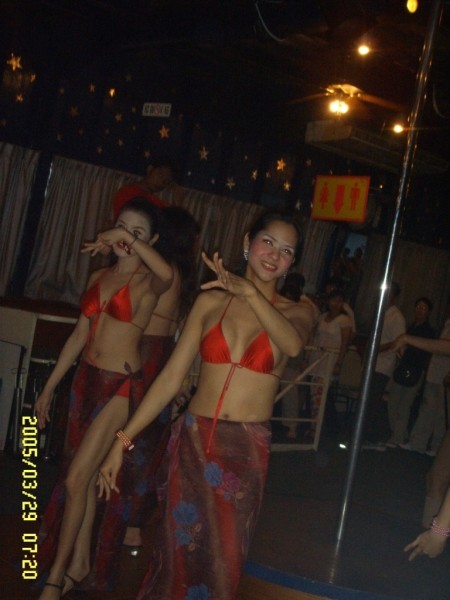 The pattaya princess of the east is far from the coast and needs to go by boat. Looking at Pattaya’s sea night view in the sea under the dim light of night, 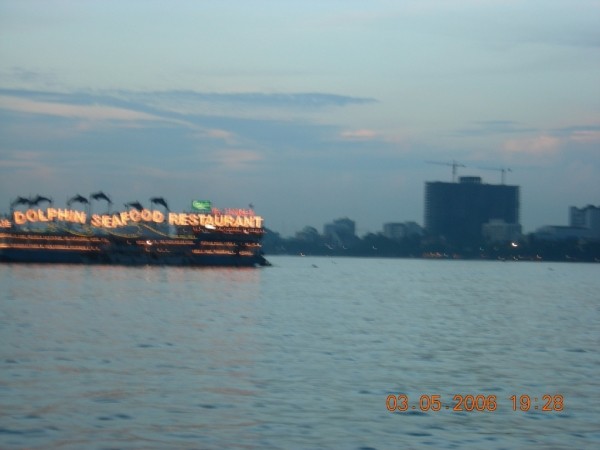 The Princess of the Orient 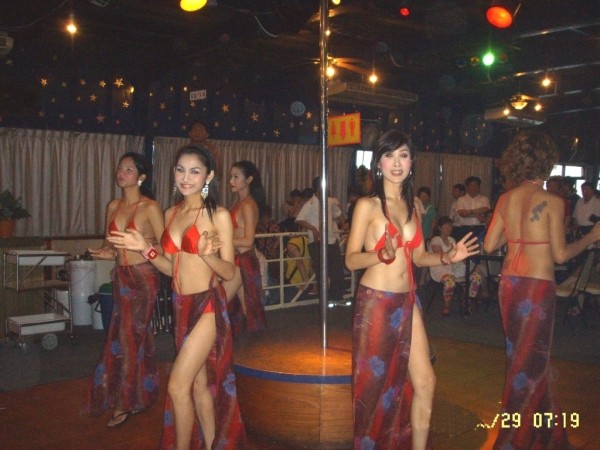 Pattaya, with its rich and colorful life, is indeed a city that never sleeps, Large areas of neon lights are shining at the junction of Tianshui. The drunk tourists on board stepped into the explosive disco floor, waving their arms and twisting their bodies to their heart’s content, Dozens of “demon” waiters with gorgeous clothes, breast augmentation and buttocks enlargement, graceful and graceful appearance, clear and white skin and beautiful flowers shuttled back and forth in the crowd, holding tips from tourists in their hands. 5 yuan RMB could take photos with them in various postures and touch their feet from head to foot. The only thing that could not be changed was that they were still men’s voices. . The transvestite performance watched was indeed very different from the feeling in the theater. The whole atmosphere was well driven by them. The whole audience danced and enjoyed themselves. This is true year after year, month after month, night after night, forgetting the etiquette and communism of various schools of thought. There should be no melancholy here to flaunt the “freedom” of capitalism. No wonder tour guides ask tourists to forget their status in the country, with colorful lights and colors. Everyone followed the explosive music and carnival together, hoping to stir up the primitive madness of human beings. Demons like men, like to hit men’s heads with their chests, like men to put their hands on their chests… The feeling is to tell everyone that they are more perfect than women. Several young boys in our regiment were kissed and touched by the transvestites. They did not know who was taking advantage of whom.^_^ 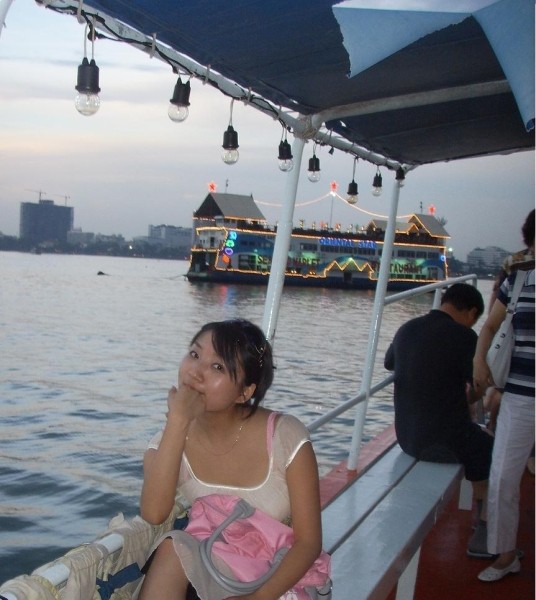 This was written before: I was deeply touched by this visit to THAILAND. I don ‘t know how to describe that mood in what’ s word, I also don’t know where to start. Maybe it’s the first time to feel the politics of other countries, Maybe it’s too long and heavy work to go out to play. Before boarding the plane last night, we were on the Kwai River cruise ship 4 hours away from BANGKOK, one by one, with dinner on board, Chinese karaoke specially prepared for Chinese tourists, & amp; The explosive DISCO M, The decoration on the ship is very ordinary, but everyone can accommodate the atmosphere very well. We sang and danced. Take photos and chat. at night, I saw the lights on the boats of other teams on the river, It’s all very lively, Hearing his teammates singing old songs, The sound of the river is returning home. I am very depressed and lost. After landing on the shore, we will go directly to the airport to return home. A few days of vacation is just over. I just started to know a little about it, and I had to leave when I wanted to touch it closely. Next time I have the chance, I will definitely take part in the free man. I am very tired and dizzy when I get home this morning. I am sleepy first. There are a lot of things in my head and I have a full schedule. I only think of what saying what ~ It is said that the life span of transvestites is very short. At most, they are over 40 years old and old. The night scene is miserable. They have no children on their knees and are alone. Looking at them who are trying their best to squander their youth, I feel a little pity and admiration. Make such a big determination to change your life and use your life to write the most frivolous beauty in your life. More charming than charming, more enchanting than enchanting, more coquettish than coquettish, only the most perfect combination of men and women can create such a stunner. The night in Pattaya is getting deeper, but the prosperity of the city that never sleeps is twinkling mysteriously and unfathomably in the lights, which has just begun to begin. In Pattaya, every night and every moment is performing the glitz and extravagance of the world. Business hours are PM7: 00 ~ AM7: 00, the city that never sleeps ~ men should come! 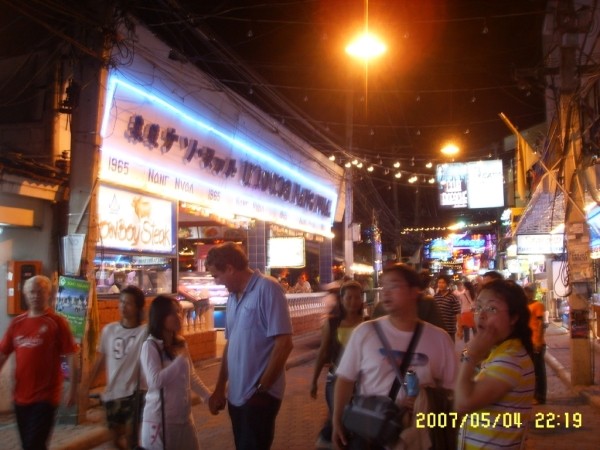 In the middle of the above picture, you can see tall European and American elders and skinny Thai sisters everywhere in Pattaya. The most fashionable rented wife here is gay on the left. White people also like skinny Thai boys. Before I started taking photos, they were holding hands. On the right were normal Chinese couples and our group friends. 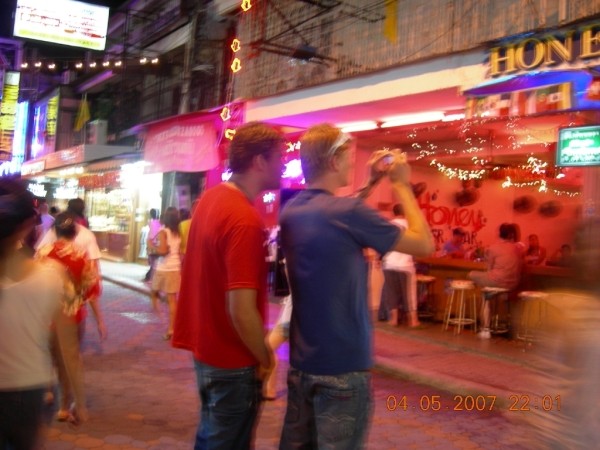 In short, foreign handsome men should never go to the island with a group to relax. Naturally, it is time to take a vacation. The business hours here are from 7 pm to 7.8 am. No matter whether you are walking in the streets and alleys here in the middle of the night or in what, you can see that under the neon lights of red and purple, rows of women in sexy clothes and posing are sitting on the bar counter, soliciting foreigners. He/she has become accustomed to it and is laughing. The environment makes people beaches and the sex industry are the reasons why Pattaya is famous. There are black Thai sisters, There are blondes dancing in the window. There is a demon demon with a figure of 80. It is popular to rent a wife here, especially western foreigners like the kind of black and thin Thai younger sister. They usually come here for at least one month to rent a wife, that is, a companion and a tour guide. The longer the rent, the cheaper the price. Therefore, Thai ladies are very good at English.

And those men from all over the world, there is no sneaky, blatant, openly, swaggering. In these places, there are very few people who come out from the east to shake. They are all afraid of AIDS. they will not be eager to try casually. However, who in my heart can hardly guarantee that the sexy MM who can perform on the stage can still sit still? If so, it must be gay… Speaking of this problem. The tour guide told me in the car that there are 4 famous streets here: Pedestrian Street (Show Us) * * Women’s Street Men’s Street Other Streets I asked him not to tell me, Probably afraid that we might go out to play at night and get out of what. But I just want to be free, Even if we lived on the mountain, I took three girls to the city to bargain with the master. I took them to find their way, In one night, I have basically learned about the streets and alleys here. I am studying maps every day. Every walk is facing the English names on the streets and maps. Although English is not very good, There is still no problem here. Besides, women are safe here. What foreigners like is that Miss Tai Mei likes men, so even if we four girls walk on the street at 2 o’clock in the morning, I rush to say that women are safer than men. The two girls want to see the men’s street. I asked the bar waiter MAN STREET, but people all said they didn’t know. As a result, when we were wandering around at night, we saw the famous street that we had seen on the Internet before, and there was no lack of what we called “pornographic” places-a fork in the road and turned to boy’s town. I didn’t want to see it. so everyone rejected it. Because it’s only for visitors, isn’t it good to play? No, I don’t have the courage. It is said that this is a place for gay men to enter and leave. (Of course, women are not rejected) Thailand is a Buddhist country, but its freedom is very high, where the sex industry is a kind of business. All relevant performances and transactions are legal and only a monetary act, but it is one of the characteristics. On the way to Pattaya, tour guides will charge more than 1K for watching SHOW. Although it is a little expensive, it is impossible not to go, You can’t drive without going to the driver. As for the performance, it’s amazing. What has seen all of it this time. It’s more exaggerated than imagined and not gorgeous as imagined. It’s just like the small ballroom in the early 1990s. but it’s still quite comedy. And the content…Let’s not talk about this, Anyway, you have to hand in your cell phone before you go in, Camera, etc. If you want to know, go in person (Chinese tour guide told us, When she led a team to Thailand for the first time after graduation, her colleagues told her that she would no longer be a little girl after coming back from this trip.) In short, it is a man’s favorite. It is really a pity that a man does not go for life. Next time, I will definitely come by myself. Anyway, this time it is a thorough investigation, and I can be a tour guide for everyone in the future.