In Chiang Mai, we visited not only temples but also Chiang Mai natural history. The museum is located on Inthawarorot Rd.

This is the entrance to the museum 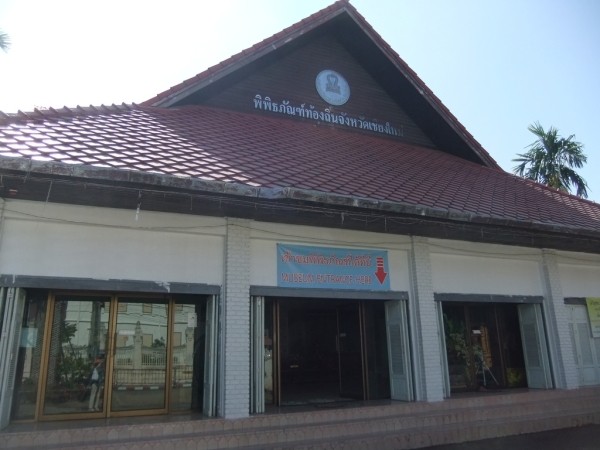 There are two greenhouses in the museum park, and the one on the left is dedicated to several Buddha statues. 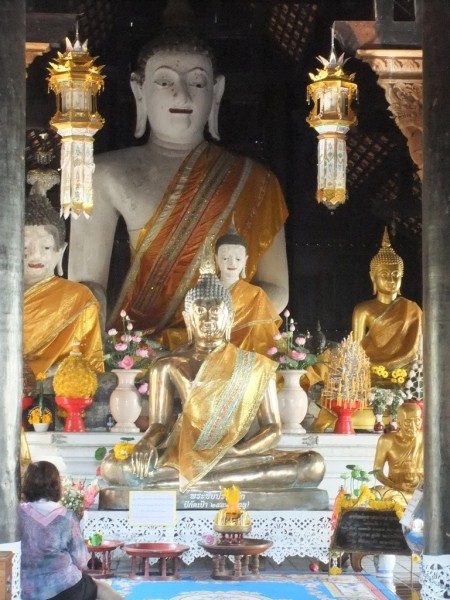 The entrance to the museum is a hall 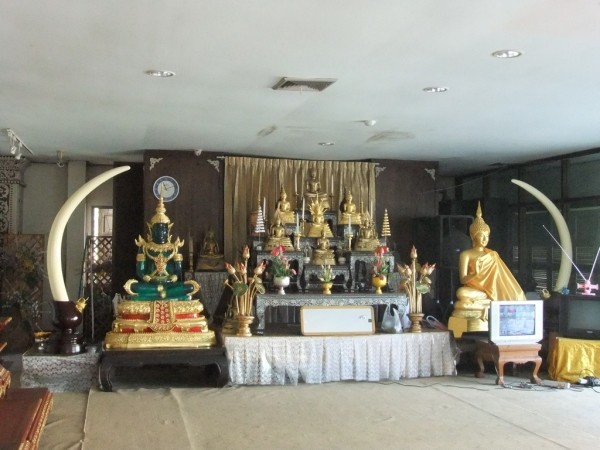 This white elephant is carrying a jade Buddha. I don’t know which period of history it is. 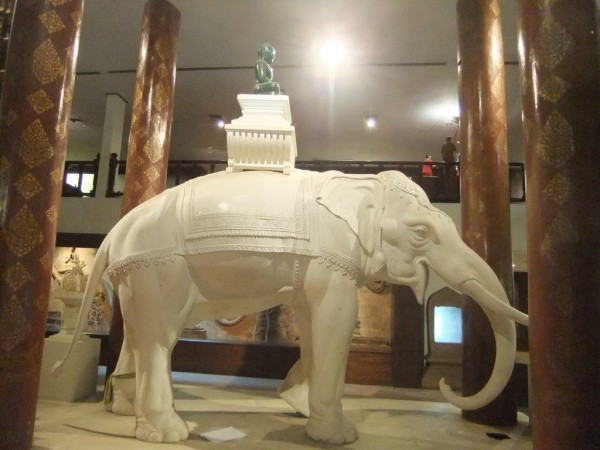 There are many sculptures in the window of the exhibition hall, which reproduce the life scene at that time. 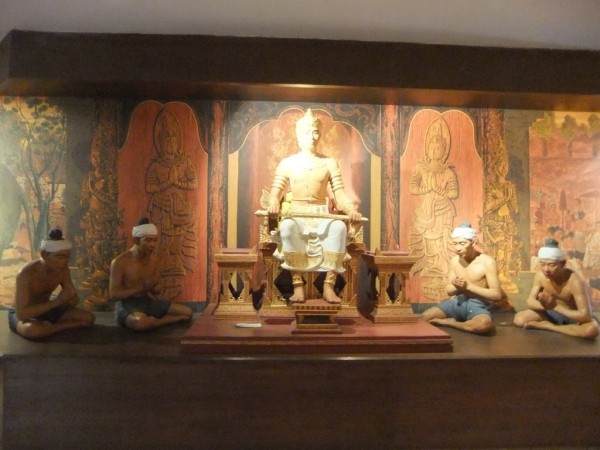 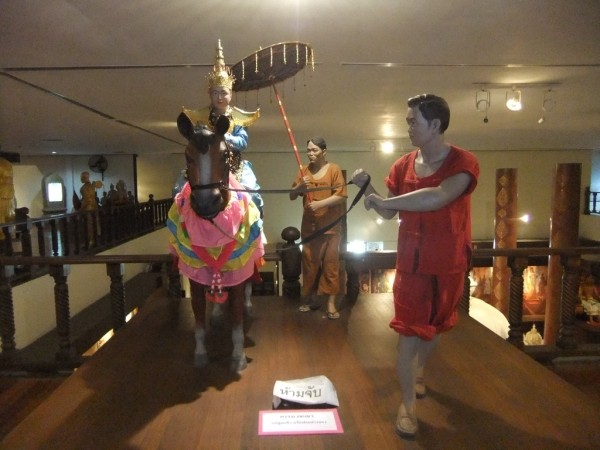 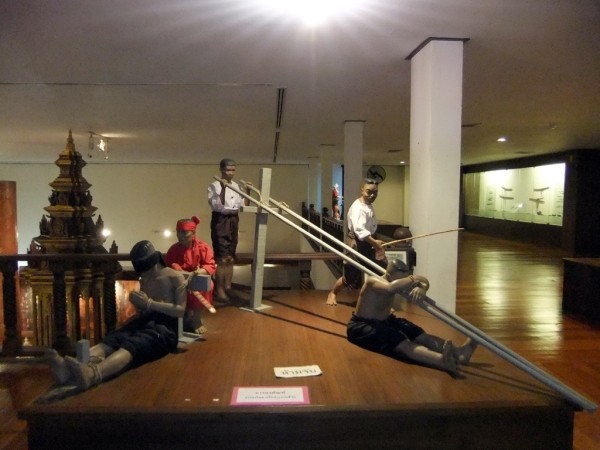 There are also two city sculptures in Chiang Mai that are worth mentioning. One is the famous statue of the Three Kings, which is also the landmark sculpture of the ancient city of Chiang Mai. 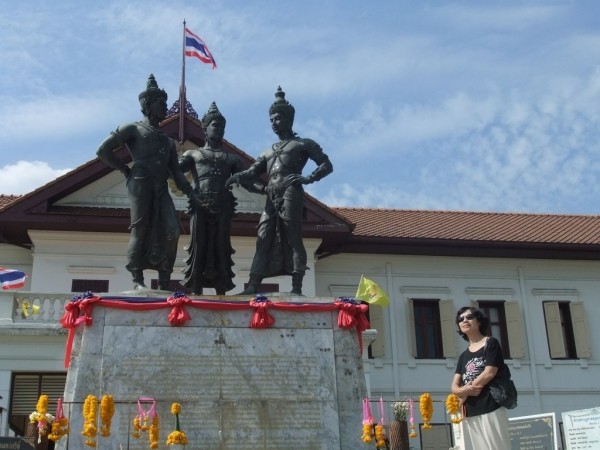 The sculpture of the Three Kings stands in front of the Cultural and Art Center. It was built to commemorate the three kings who worked together to build the ancient city of Chiang Mai and made great contributions to Chiang Mai: Emperor Lankanheng, King Meng Lai and King Nan Meng. The three kings have a high position in the hearts of the people of northern Thailand. Under their sculptures, there is an altar filled with yellow flowers and tributes. People come here to worship every day.

There is also a famous police sculpture, which stands in the square in front of Chiang Mai Police Station. The sculpture shows the scene of the police rescuing the people. 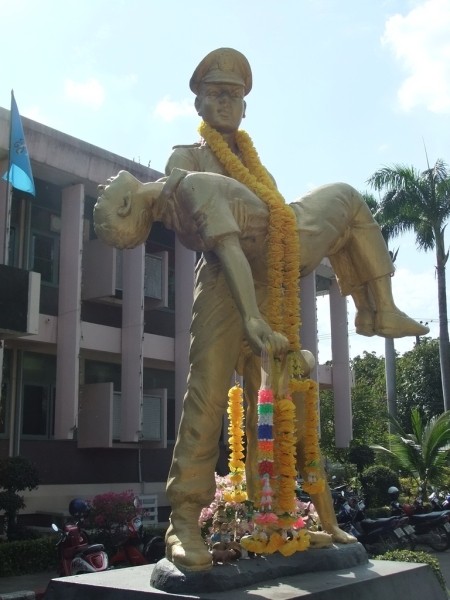 Several night markets in Chiang Mai are also must-see places for tourists. We went to the “Valolo Night Market” outside Tape on the evening of the 9th. This night market mainly sells all kinds of snacks, There are all kinds of fried rice with fried powder, All kinds of cooked meat and cooked vegetables, All kinds of fried and roasted seafood, all kinds of freshly squeezed fruit juice, all kinds of fruits and vegetables, the air is filled with smoke and the taste of cooking dishes. A narrow street is full of these snack stalls, and the two passages in the middle are also crowded with people. Almost every stall has diners in front of it. They are either queuing up or sitting in front of a simple dining table. We also walked all the way and ate all the way. We walked down the two passages and our stomachs were already full. 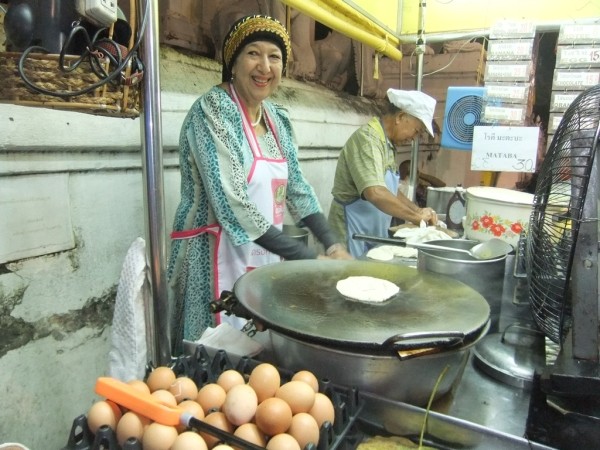 The Chiang Mai Night Market outside Chiang Mai, which was visited on the evening of the 10th, was dominated by various handicrafts and clothing.

This is a beautiful lantern

All kinds of soap flowers 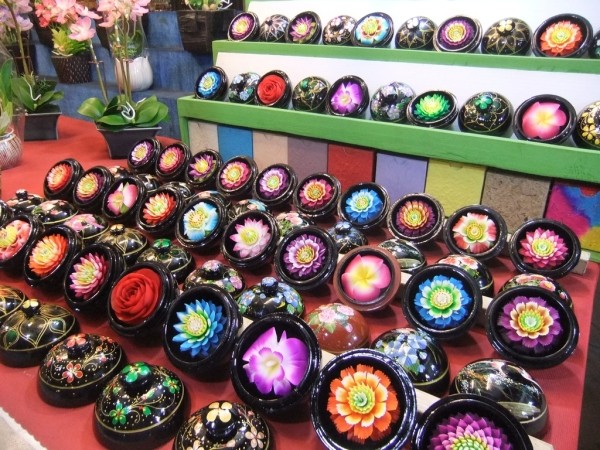 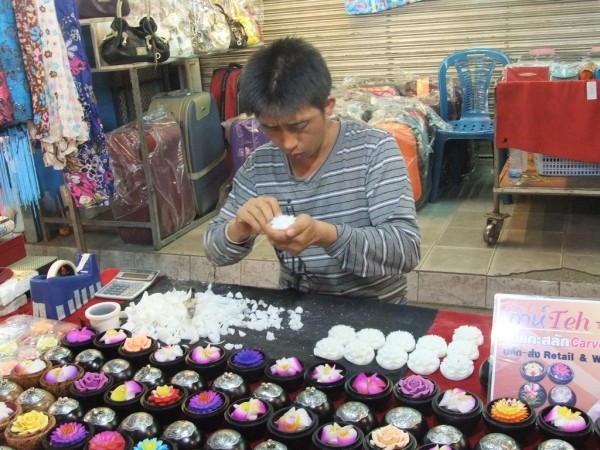 The scale of Chiang Mai Gate Night Market is obviously several times larger than that of Walloluo Night Market. A stage was also set up in the open space of the market, on which actors performed Thai folk dances. 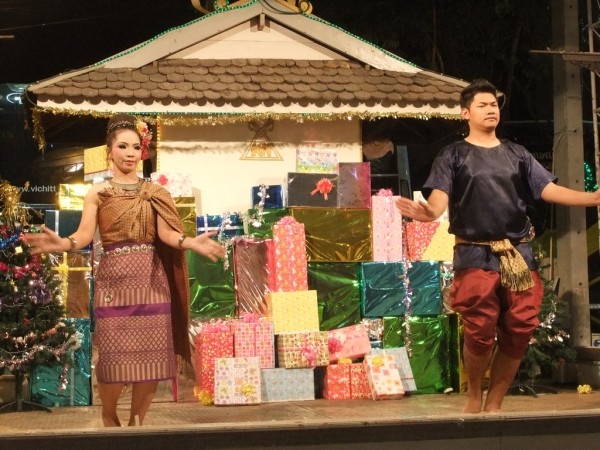 There are also many massage shops and fish therapy rooms in the night market, which is where tourists are enjoying fish therapy. 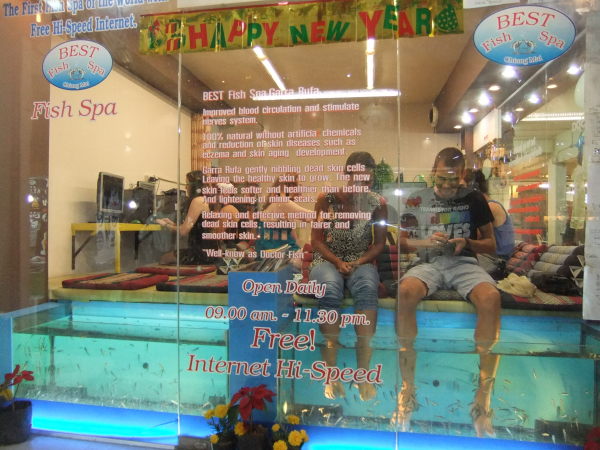 We strolled from 8 o’clock until 11 o’clock at night before returning to our residence.

Chiang Mai is an ancient city. The ancient city still retains some incomplete city walls, but it has been integrated with modern roads. 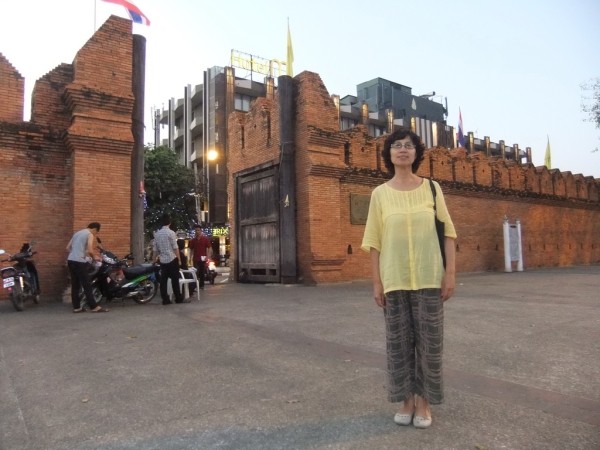 Chiang Mai is also a very artistic city. Her streets, shops and unnoticed corners are often decorated with surprising decorations.

The wooden chair on the sidewalk in the street, look at its backrest. 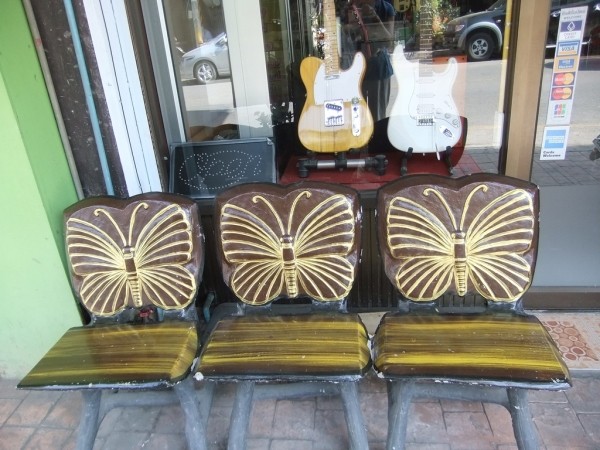 Potted Trees on the Sidewalk and Little Babies Under the Trees 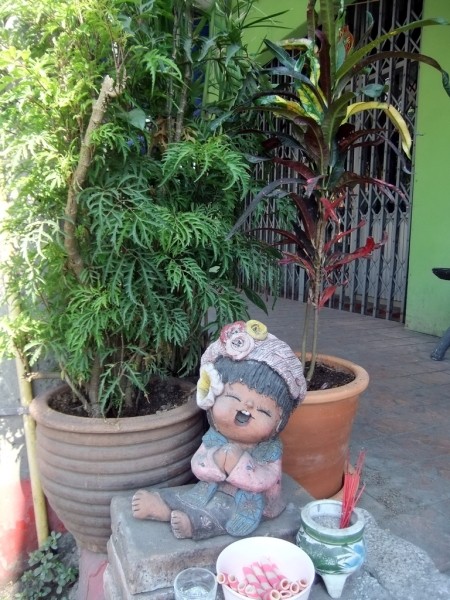 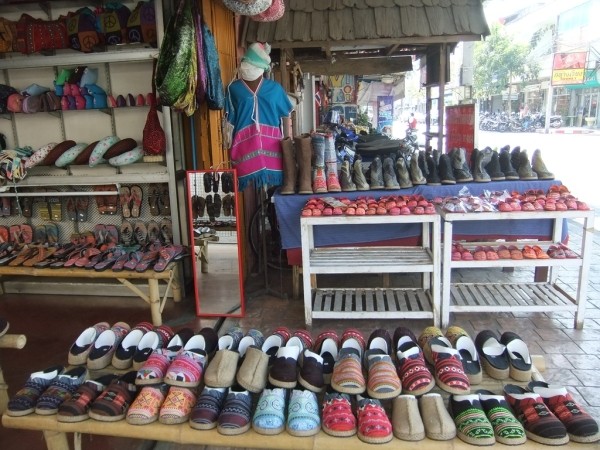 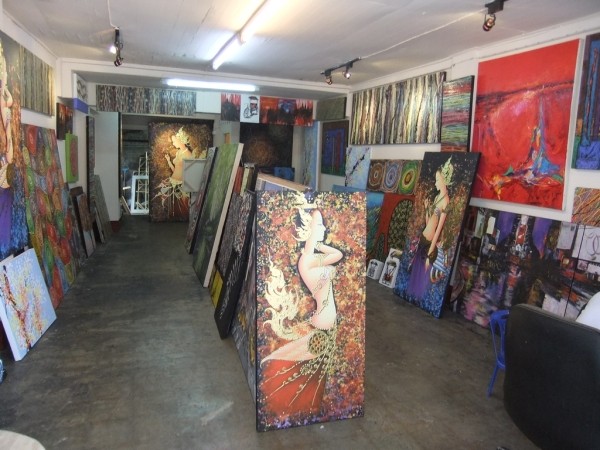 The coffee shop with only two tables, even the outside floor is beautifully decorated. 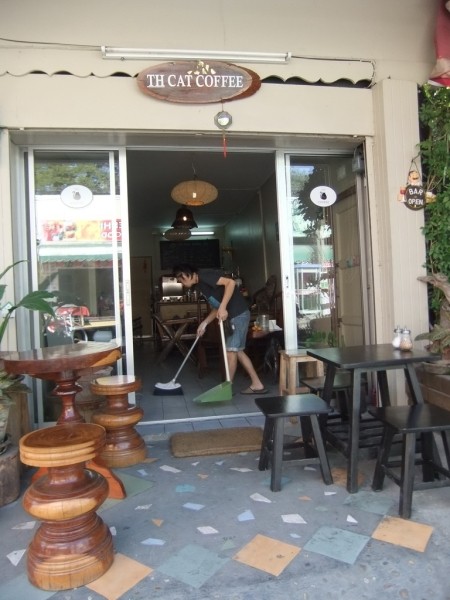 In front of the wreath shop 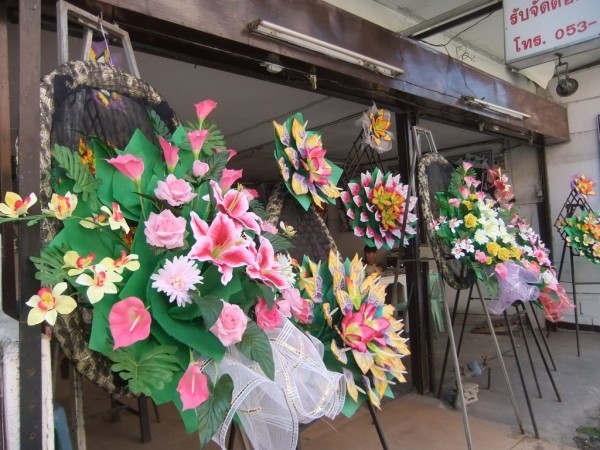 It really took a while to take a picture of this lovely puppy. 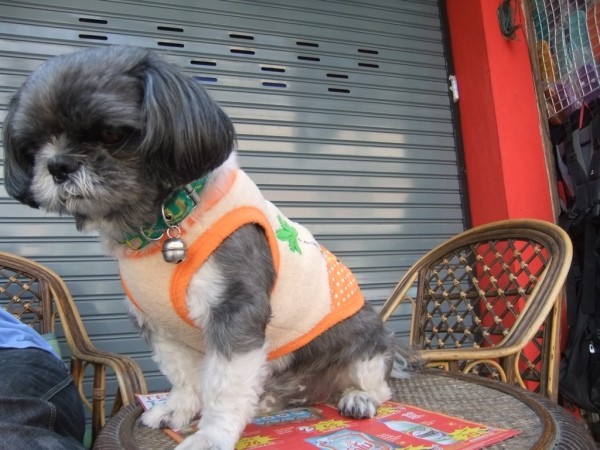 This was taken under the steps of a temple. 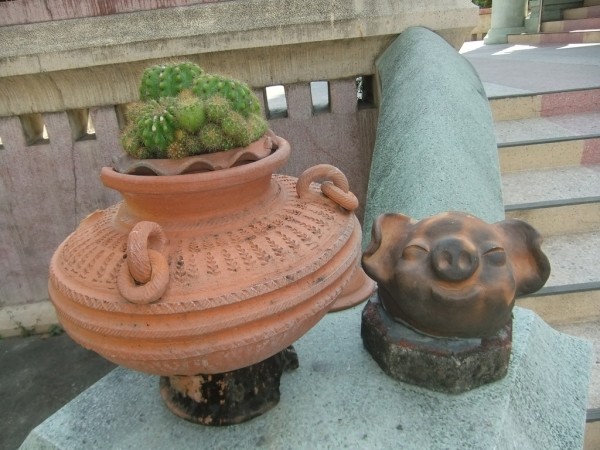 A corner of the yard, what a lovely clay figurine

A small Buddhist shrine that is inconspicuous. 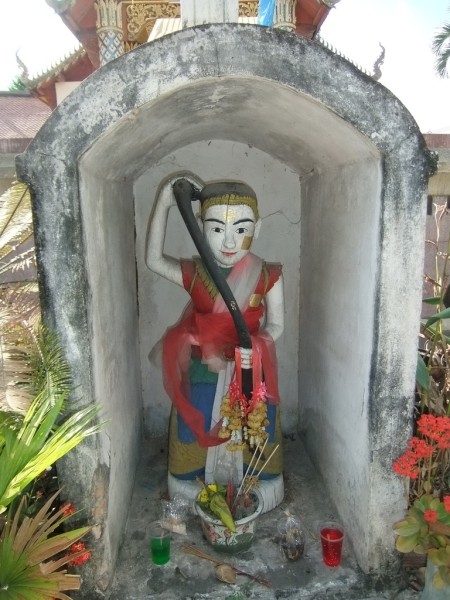 The yard of any family 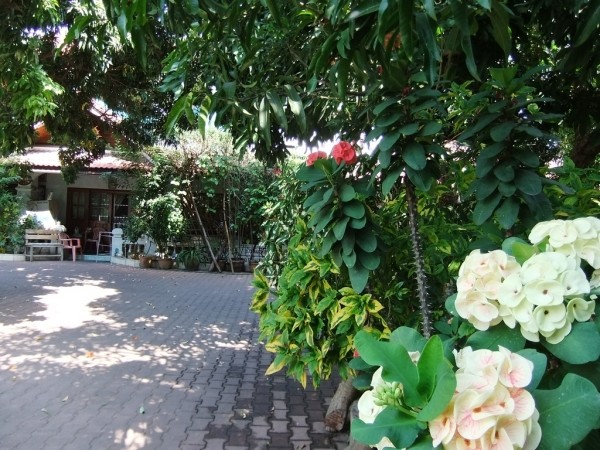 Is this the salesroom of AirAsia? How did you get these two? 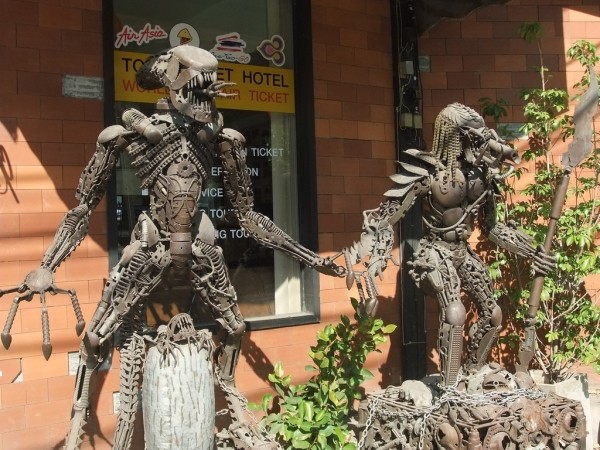 We only stayed in Chiang Mai for two nights and will take the 8 pm bus back to Bangkok on the 11th. We got up late in the morning and cooked the shrimps we bought from the market in an electric cup in the house.

I also made cabbage, mushroom and meatball soup and ate pancakes bought the first day.

I checked out at 11 o’clock, left my luggage in the hotel and continued to visit the temple. He didn’t return to the hotel until nearly 6 o’clock.

The bus back to Bangkok went to Acabas Station in the northeast of the ancient city. Ru asked several taxis and TUTU buses, but they didn’t want to go, so we took two buses. The two cars are modified from pickup trucks. There are two rows of benches in the rear compartment. Each row of benches can sit for four or five people and stop at will. The average fare is 20 baht, and the longer fare is 30 to 80 baht. This kind of car is the main means of transportation in Chiang Mai.

Not far from the hotel, we saw a car parked on the side of the road. Ru showed the driver our bus ticket and asked how much it was to go to Aka bus station. The driver gesticulated that each person was 20 baht and the four of us were 80 baht. After driving for half an hour, we arrived at the bus station, but it took us a while to park and stopped two or three times to find the right place. In order to thank the driver for his hard work and kindness, we gave him 100 baht.

It was more than an hour before the bus arrived to get off the bus and say hello, so I sat on the chair under the pillar to rest. 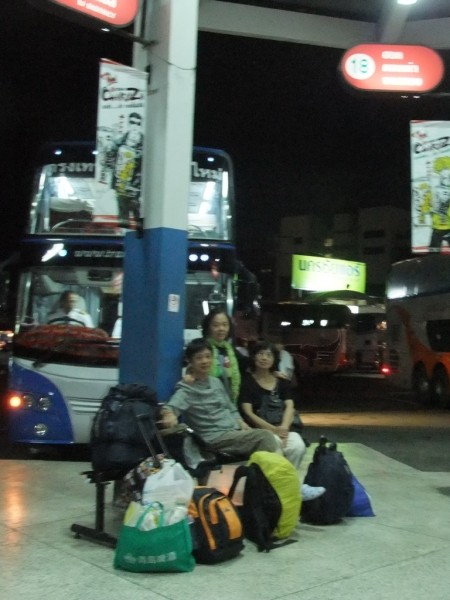 At nearly 8 o’clock, our car pulled into the station, which was much more spacious than the car when it arrived. The chair was very high and could be laid down 150 degrees. 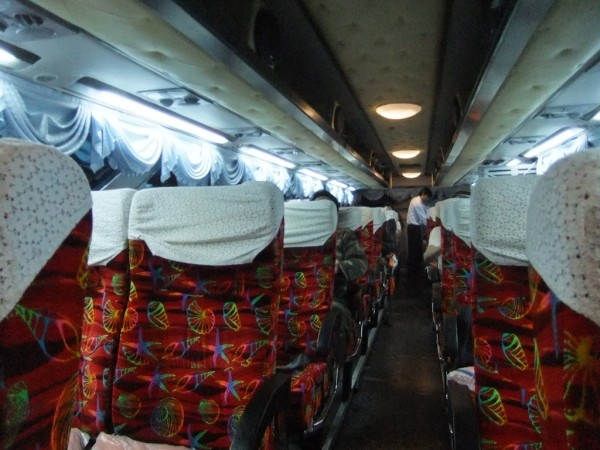 Each car is equipped with 2 drivers and a waiter, who is responsible for packing and distributing food. Each of us handed out a towel coverlet sealed in a plastic bag and a food box with a bottle of water, a box of fruit juice, a snack, a bag of coffee, a partner and a wet paper towel. 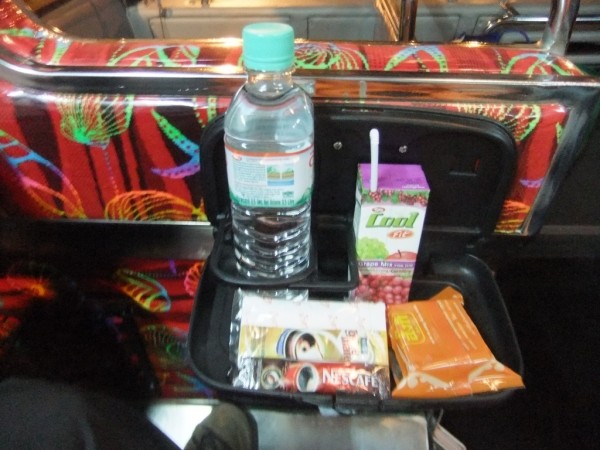 At 8:05, the car started and was not full. Many people had two seats for one person. The car was driving very steadily, not as fast as it was when it came, all of which gave people a sense of security, so it didn’t take long for me to fall asleep.

We arrived at Bangkok Bus Terminal at 5 o’clock in the morning on January 12. It turns out that the bus terminal is near the weekend market. We took bus no. 77 to sima city in the center of the city at a fare of 17 baht. The car stopped beside the light rail to the airport.

There was a McDonald’s in the hotel across the road, so when the door was opened, the four of us dragged our luggage in and found a window seat. The temperature here is cool and there is no one to disturb. We went out for breakfast, shopping, lunch and shopping until 4 pm. Look, it’s almost time. Get up and go to the airport. First asked the taxi, the driver offered 500 baht, so he took the light rail, 40 baht per person, and drove all the way into the airport.

The plane took off at 6: 50 p.m. And landed at Baiyun Airport in Guangzhou at 10: 40 three hours later. This is the end of the 26-day free trip to Vietnam, Cambodia and Thailand.