The next morning, I was not in a hurry to go to Patong, because the hotel had already been found the day before, and it was found the afternoon before when I was wandering in Patong-a family hotel “Longbeach Guesthouse”, which was not easy to find and was in the innermost part of a compound. Accommodation conditions are OK, the price is the cheapest, 500B, 1000B for two days. I have already paid the female boss in advance. It is not too far from the sea. Patong is in this position. Other hotels usually need 600B in dark rooms without windows and air-conditioned bathrooms, which is still off season. But that day I was going to Phi Phi Island. It turned out that the trip to Phi Phi Island was booked at the travel agency in Phuket the night before. Phi Phi’s one-day tour there is priced at 1000B, which is cheaper than Patong’s. Patong’s one-day tour is priced at 1200B, including a lunch on Phi Phi Island, round-trip fares, etc. And told me to pick me up at Lek Guesthouse around 8:00. So I decided to go to Phi Phi first and then go to Patong to stay after coming back at 4 o’clock in the afternoon. When the time came, the minibus arrived at the hotel on time, and several passengers who stayed here got on the bus with large bags on their backs. They all went to Phi Phi Island, and soon the car started and headed for the dock.

When I arrived at the dock, I found it was bustling and very lively. It turns out that Phuket Wharf has several ships to Phi Phi Island every morning, and there are also ships to Jiami. There is a row of small buses parked in the square, all of which pick up and drop off tourists. Many tourists queued up to board the boat one after the other. At this moment, we also got off the bus. Immediately, someone took us to one side and gave each person a yellow ticket. A closer look at the “name” of each tourist printed on it. At this time, another person put a label on each of our tourists’ shoulders, including yellow, red, blue, etc. Those with yellow labels are tourists who take part in Phi Phi’s one-day tour, so that they can be easily identified on board so as not to get on the wrong boat. 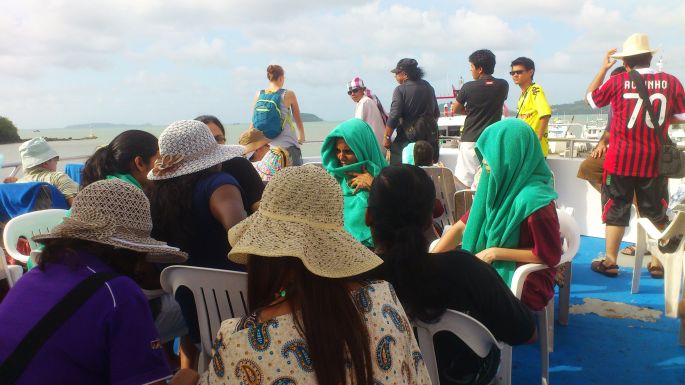 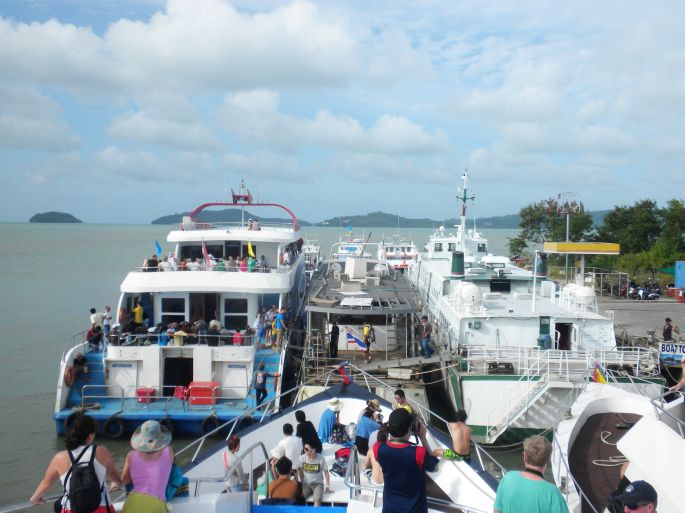 At nine o’clock, the ship left on time. On that day, the weather was very good and the sky was clear. The cruise ship was sailing on the endless blue sea. The white spray was churning happily behind the ship. The sea breeze was blowing gently, breathing the fresh and humid air and feeling more comfortable. Looking at this beautiful sea view, I can’t help feeling relaxed and happy.

About an hour after leaving Phuket Wharf, a hill loomed in front of the sea level, which was an island in the sea. Dream of 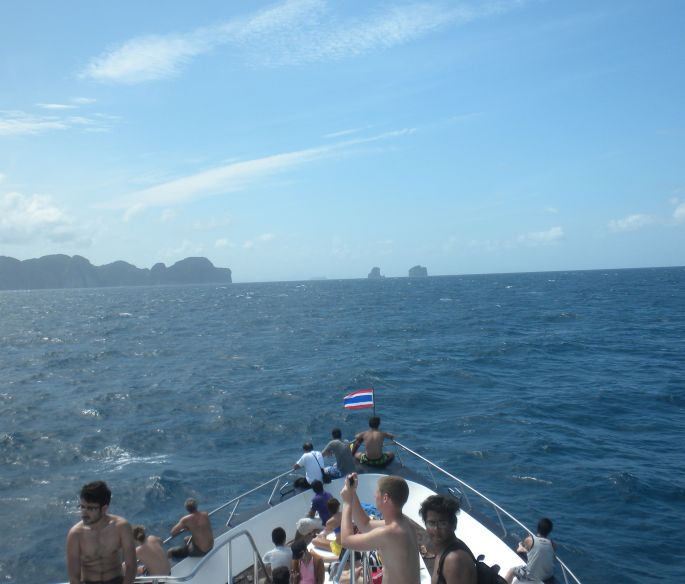 From time to time, speedboats and cruise ships pass by quickly: 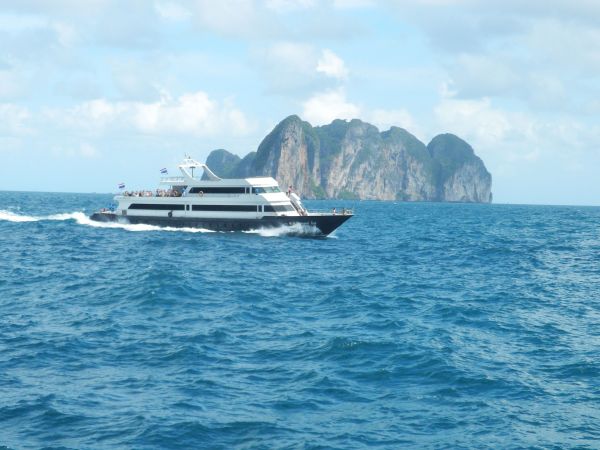 Finally, the mountain is getting closer and closer, and the scenery is getting more and more 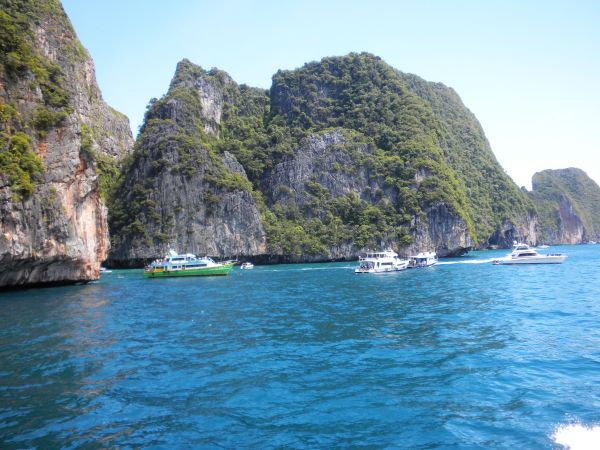 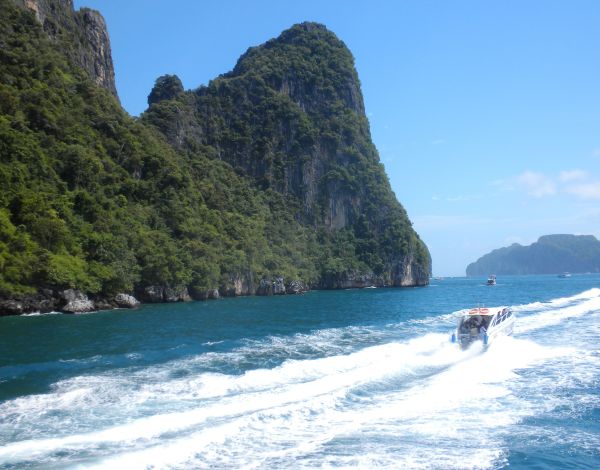 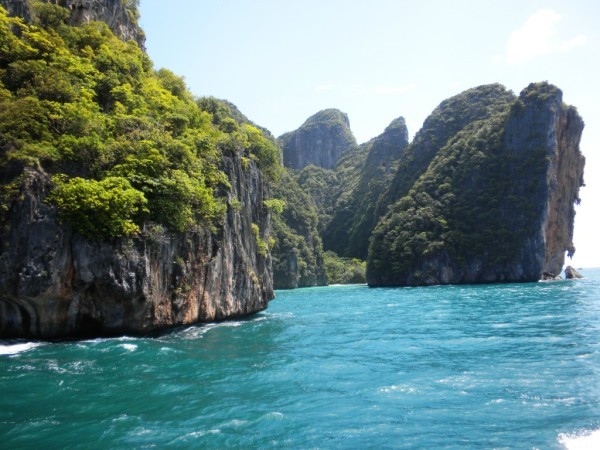 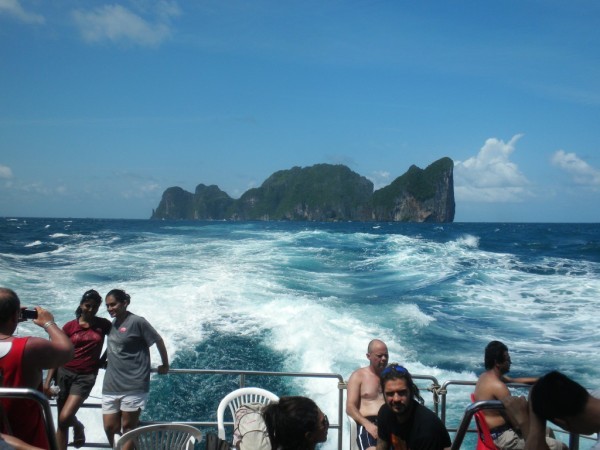 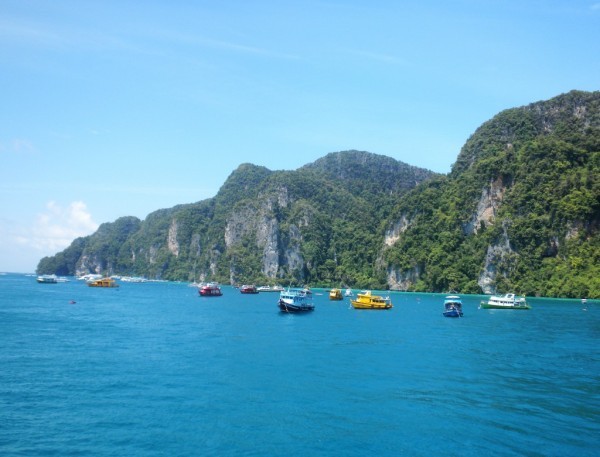 After more than two hours of sailing in the sea, I finally arrived at Phi Phi Island: 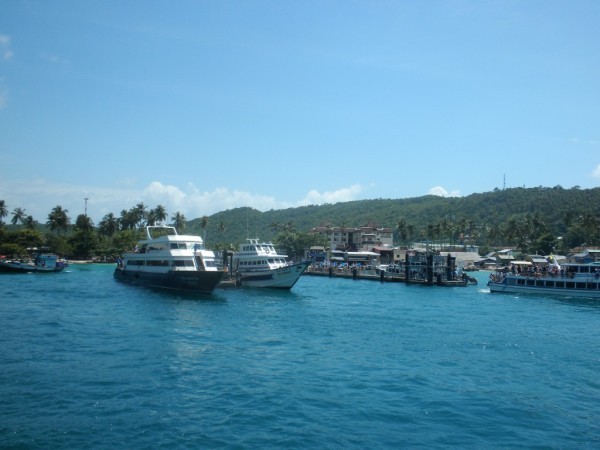 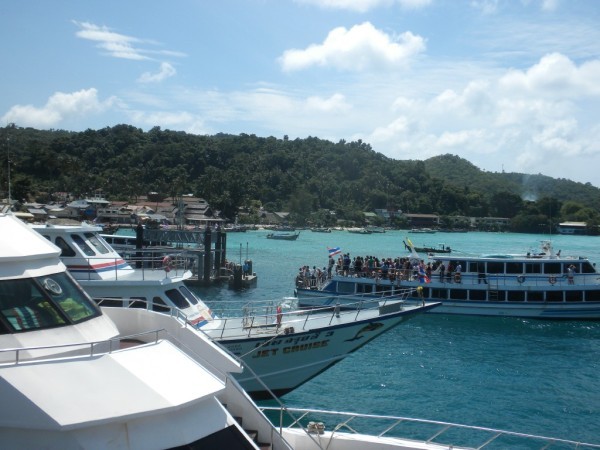 However, I feel that Phi Phi Island is very common, but those small islands passing along the way are more beautiful, perhaps because “I don’t know the true face of Mount Lushan, only because I am in this mountain”. At this time, we did not rush ashore, but drove aside. The captain told us that there was also a self-funded diving program. Those who took part in the diving were divided into one group and the other group stayed on board to enjoy the beautiful scenery. 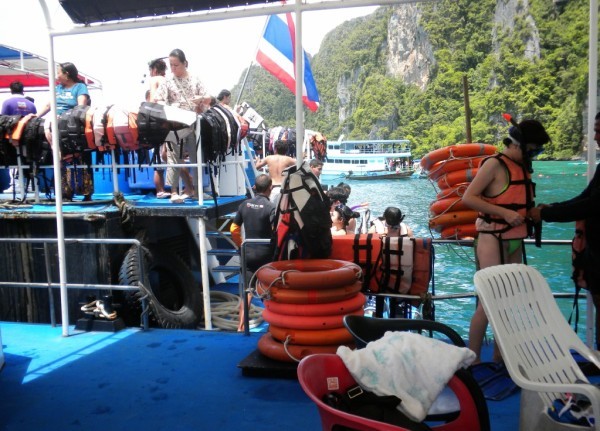 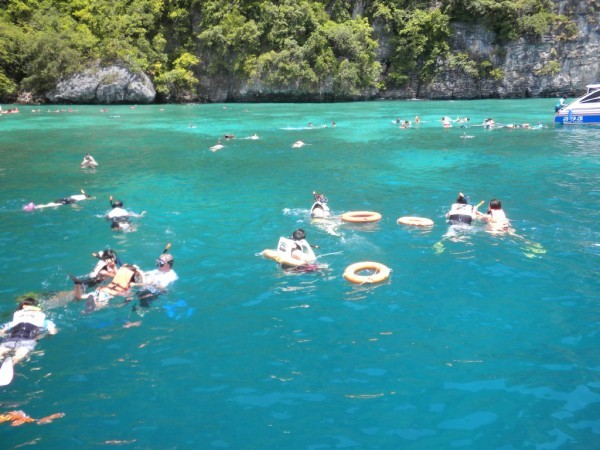 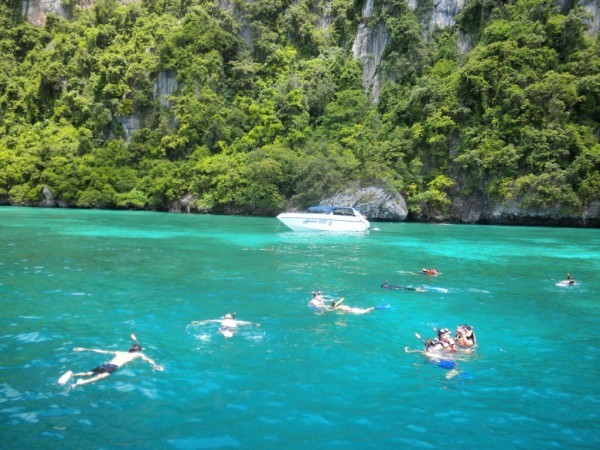 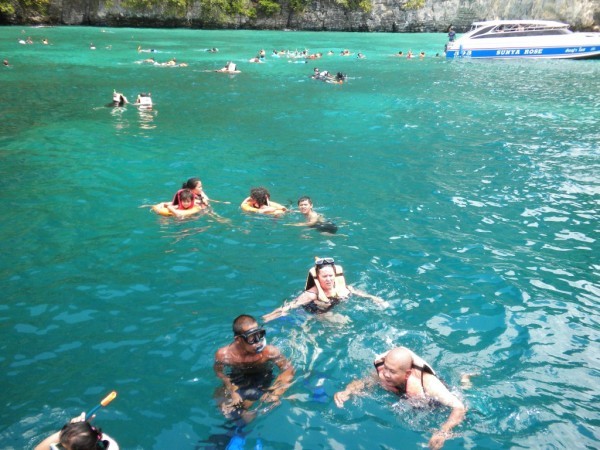 The most interesting thing is to feed the fish in the sea with bread. Soon, I don’t know where many colorful small fish came from. They scrambled for bread crumbs and swam around. However, they were very clever and couldn’t slip. They jumped up and down and couldn’t catch them. 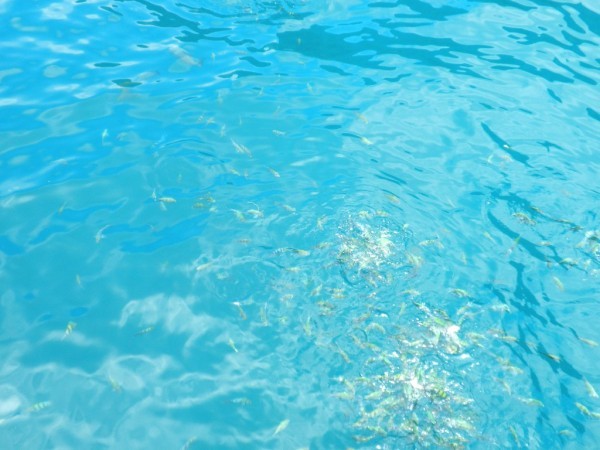 After everyone enjoyed diving, they must be hungry at this time, so they boarded the ship and landed for lunch!

Lunch was quite sumptuous in a luxurious hotel: 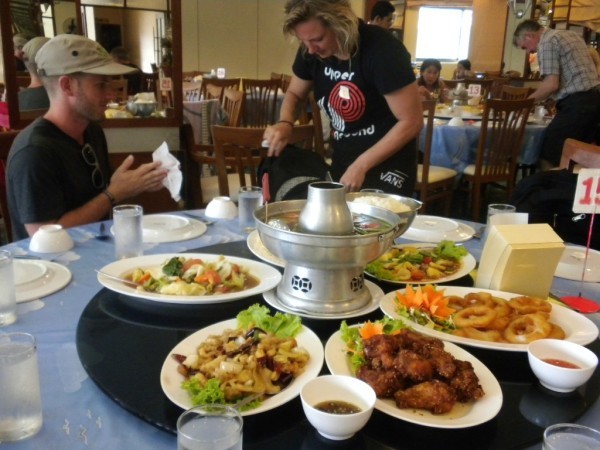 After this lunch, the captain told everyone that there was still one hour of free movement and they must return to the ship at 2: 30.

So he hurried on Phi Phi Island, interspersed with the bustling crowd, walked for a while, and finally saw the blue sea. 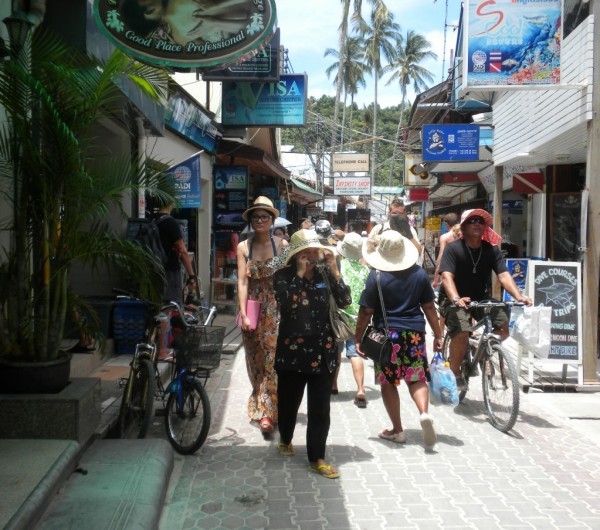 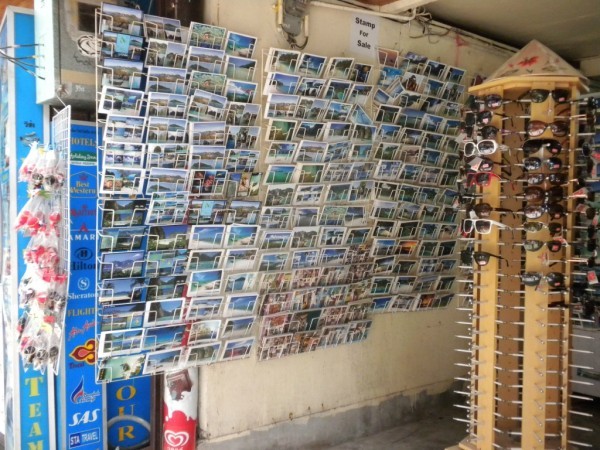 Although it is only a quick glance at the beautiful scenery here, I am still shocked and intoxicated by the incomparable seascape here. 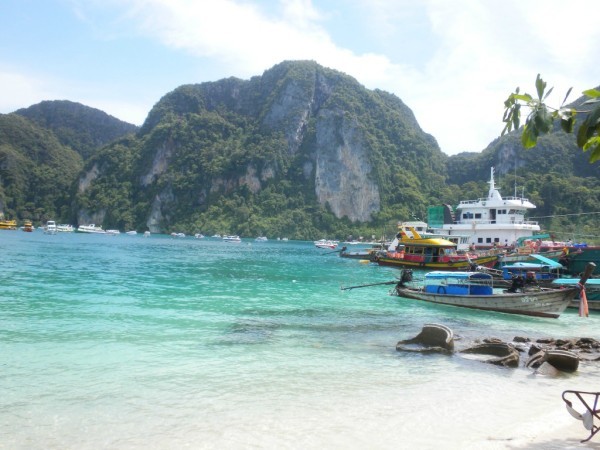 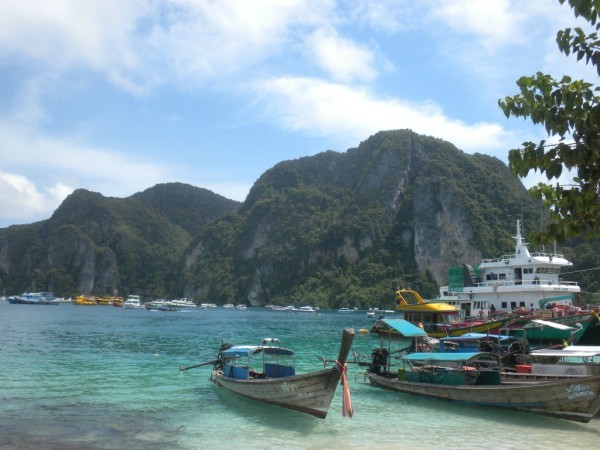 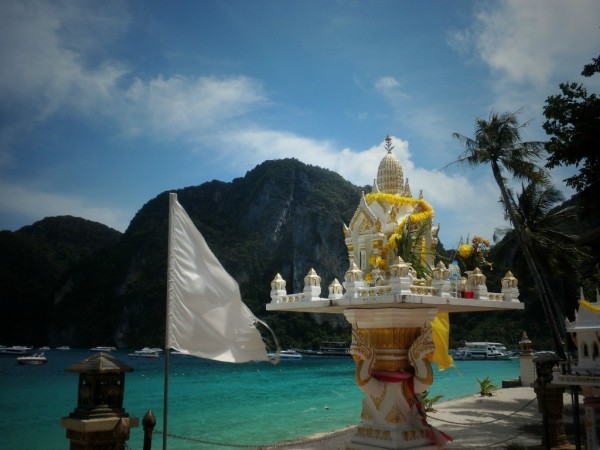 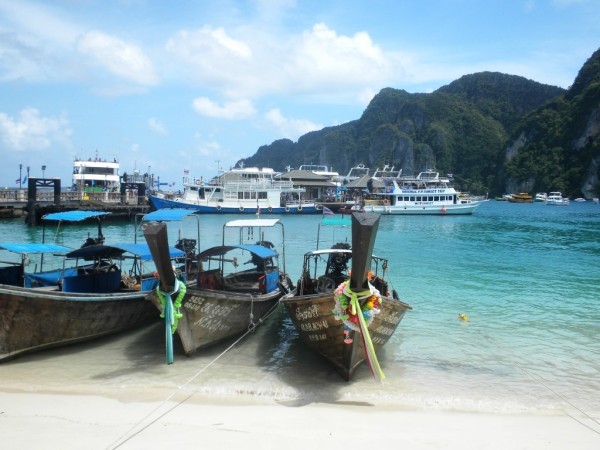 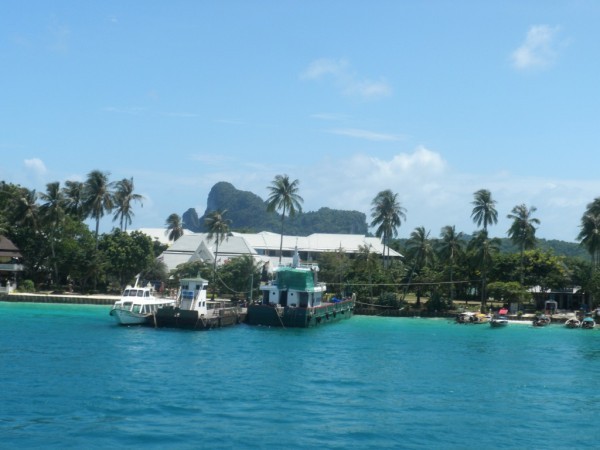 About two hours after the return trip, I sat on the deck seat, basking in the sun, drinking Thai black tea drinks, enjoying the blue sea, and feeling the gentle blowing of the sea breeze, as if I had come to fairyland…….

The drink was bought on the boat, Each bottle of 40B, in Bangkok’s 7-11 supermarket, the price of such black tea is relatively appropriate. Thailand’s tourism service is very standard-after returning to Phuket, a row of minibuses will be parked on the dock to pick up tourists for the return trip. Therefore, at the exit of the dock, each passenger will show the round-trip ticket with his name printed on it and then be led to the corresponding minibus. In this way, I was taken from the dock to the fountain in the city center. It was not yet five o’clock. The last bus back to Patong was at 7: 00 p.m. and it was there for dinner. There were many snack bars, Fujian noodles, seafood noodles and special covered rice…….

Finally, don’t forget to give Phuket two close-ups at sunset: 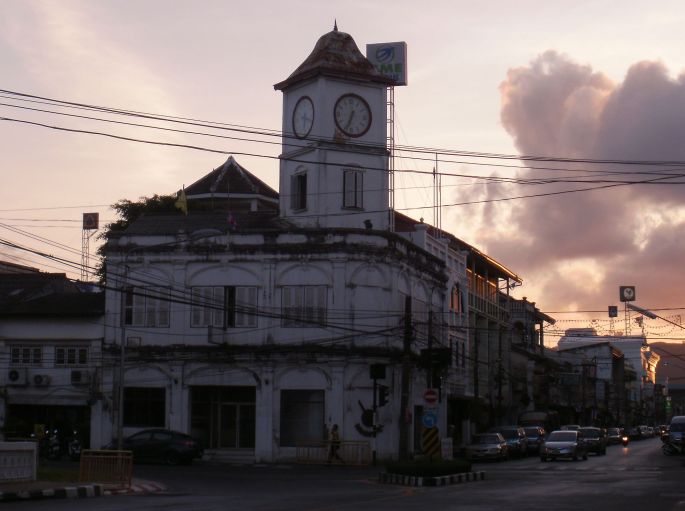 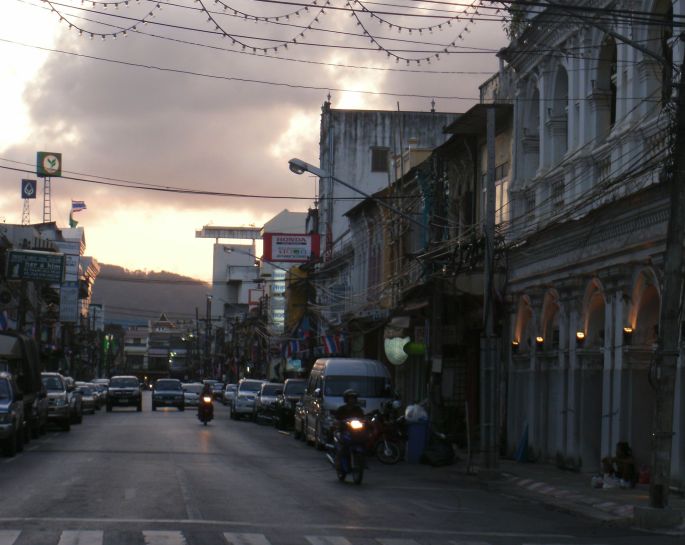 Return to Patong and end the pleasant one-day tour of Phi Phi.