Perhaps it was too excited, perhaps it was because the hotel was in the noisy downtown with heavy traffic and did not sleep well that night in Lokun. Only at 8 o’clock the next morning did I wipe my sleepy and sore eyes and get up. Suddenly I remembered that I was going to go to Jiami today. I planned to stay there for one night before, so I took a bus to Bangkok the next night and stayed there for two days, but suddenly I thought that I still had a very important place to go. That place was too important to me, and for me in southern Thailand, it was too remote and there was still a long way to go. So I decided to go to Jiami, but I did not live there and returned to Bangkok that night. This can save one day’s time, in addition, it can also create a reason for coming to Thailand next time. Moreover, I don’t want to carry heavy luggage to play after checking out… However, later, it proved that this was the biggest mistake in this trip, which directly led to the second regret of the trip to Thailand… This is another story.

To get back to the point, After leaving the hotel, Looking for a car to go to the long-distance station is very far away from the city, about 5 kilometers away. Only after that did I find that the cars there are relatively broken. It takes more than three hours to get to Jiami, and it takes two hours to get a car. It was very late to get there, which did not meet the requirements of my one-day tour. So I turned back to the city and told the coachman to park the car at the place where the city specializes in Luokun-Jiami passenger dedicated line. From Luokun to Jiami, if you want to take the fast bus, there is a special place in the city to wait for the bus. The fast buses here are all Toyota minibuses. There is an hourly bus to Jiami. There are also the same fast buses to Heai and Dongli, but they are taken at other locations.

Although there were many passengers getting on and off all the way, our car ran very fast. After more than two hours of travel, we finally arrived at Jiami and saw the chartered buses of tour groups by the sea and the hills rising abruptly in the sea on the flat ground…….

Just wanted to walk around the street, suddenly someone came over on a motorcycle and asked me where I was going. I said I would go to the station, but it would take a while… the man was always pestering me and had to take me to the station. He said it would only be 50B, I said it would be 40B, but he actually agreed… so he went all the way to the station. Jiami Station is very far away, about 10km away from the city. It took a while to arrive. The 40B fare was really worth the fare. After arriving at the station, I bought a ticket to Bangkok. The ordinary bus 700B (the price varies slightly with the train number, and the senior bus 950B) was at 5 pm. After buying the tickets, I found that it was still a long time, so I decided to go somewhere and finally decided to go to the famous temple near Jiami, Tiger Cave Temple. However, I don’t know the specific location. What should I do? The man who sent me here just now had been riding a motorcycle for a long time and did not know where to go. Suddenly he found that there was a travel agency in the station, so he went to consult. Wow, the boss of the travel agency was very enthusiastic and offered me a small piece of watermelon. When I heard that I was going there, my face changed immediately. He said that the Tiger Cave Temple was located on a steep mountain and how far the journey was… I hit the nail on the head and asked him how much it cost. He said 500B, I thought it was expensive, so I talked about 400B.. Soon a “Mercedes Taxi” arrived. The boss was the driver. Let me leave my luggage there and only take my backpack to the Tiger Cave Temple. However, I didn’t expect the Tiger Cave Temple to be too close to the long-distance station. The road back to the city turned to the left fork in the road, which was only 5 kilometers at most. Ah……

After that, the boss told me that he would come back to pick me up to the station in three hours and walk inside to the Tiger Cave Temple.

So all the way forward, I saw the main entrance of Tiger Cave Temple: 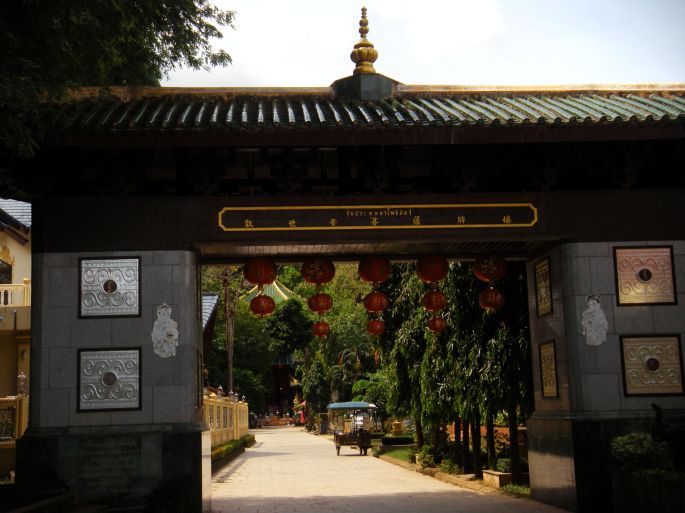 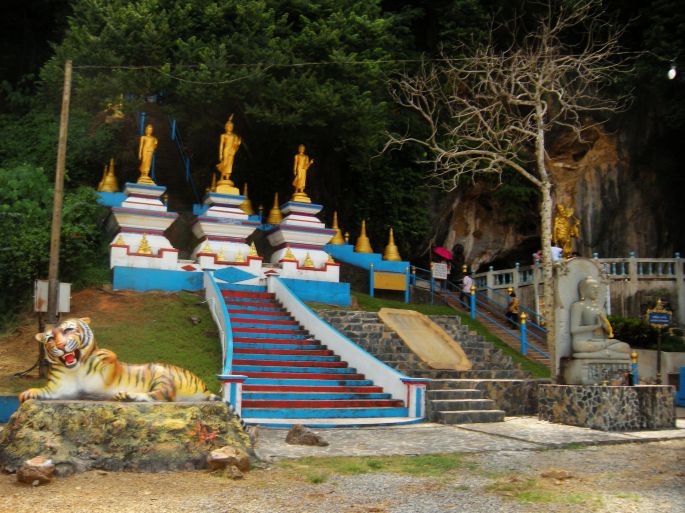 This Tiger Cave Temple has one in Bhutan and one in Jiami in Thailand. I am going to the one in the back. Why are they all called this name? I think the possible reason is that the two temples are both located in remote mountains. 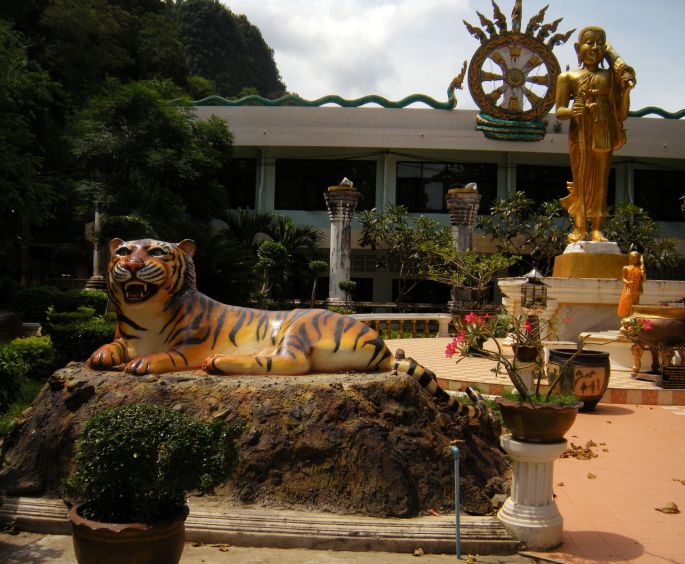 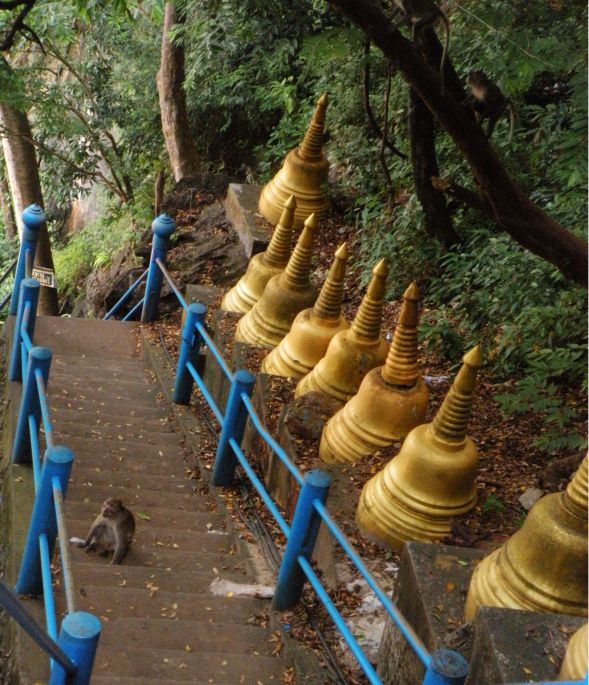 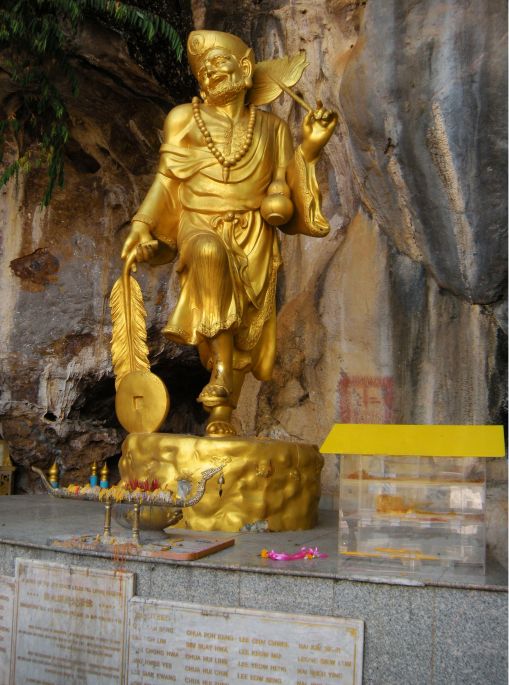 There are many monkeys in the woods at the foot of the mountain. They are not afraid of people and jump around……. 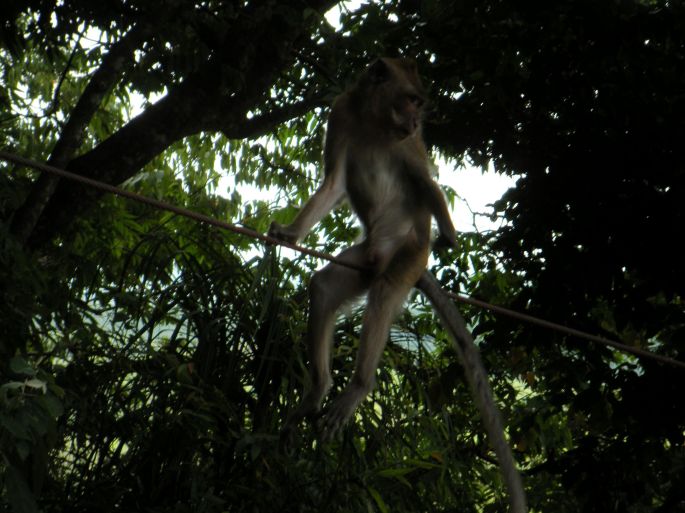 Up the steps, the scenery is getting more and more beautiful. 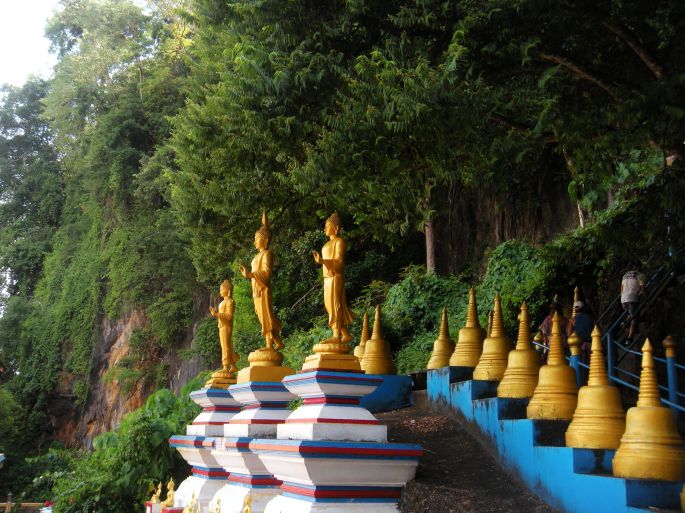 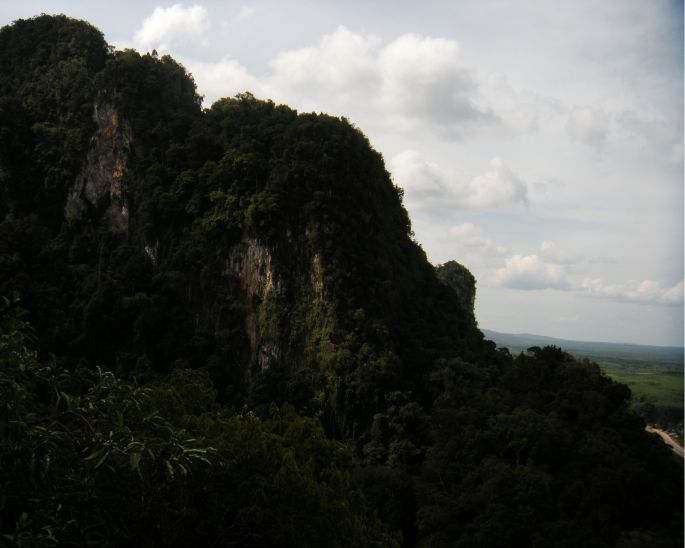 The Tiger Cave Temple is on the top of this steep summit. All the way up, I was so tired that I was panting and stopped several times to rest……. 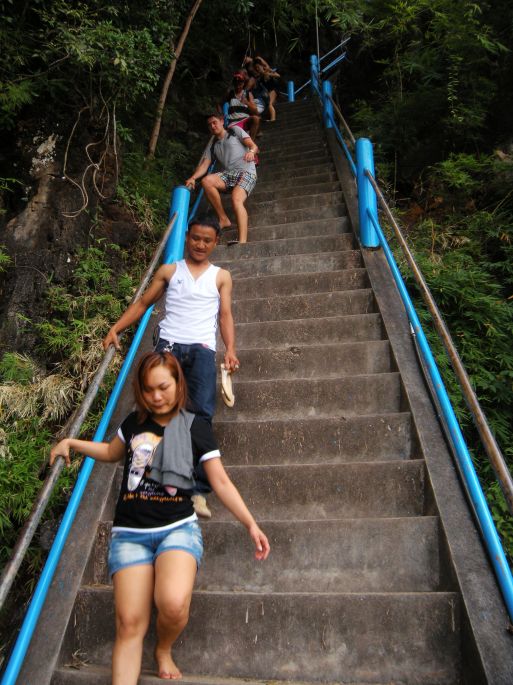 After climbing for more than half an hour, he finally reached the top. The glittering pagoda of Tiger Cave Temple shines brightly in the sun. It is really resplendent and magnificent. 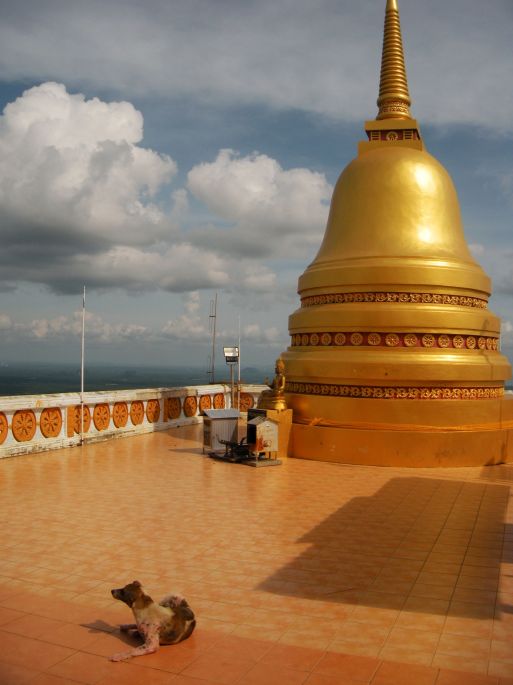 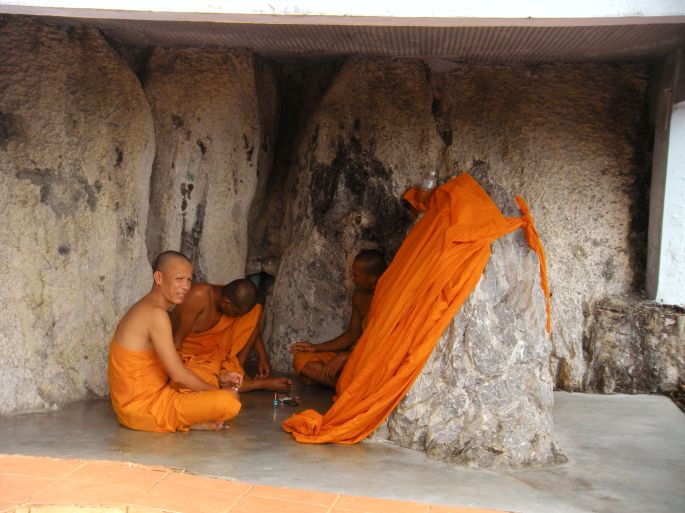 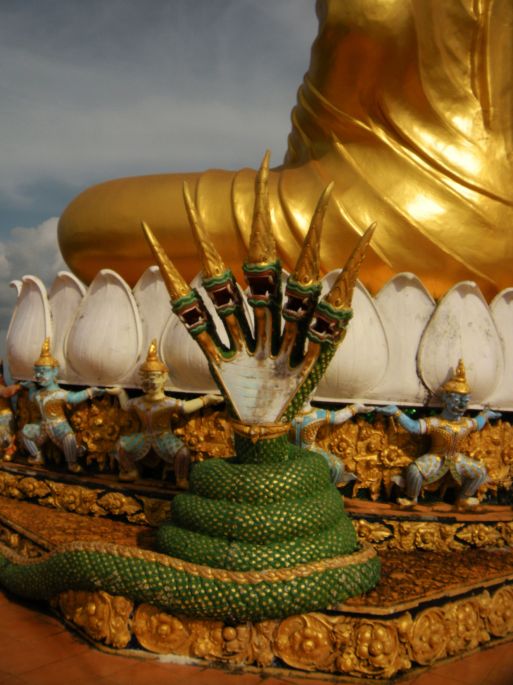 Standing on the summit, overlooking the beautiful scenery of Jiami Mountain and Sea: 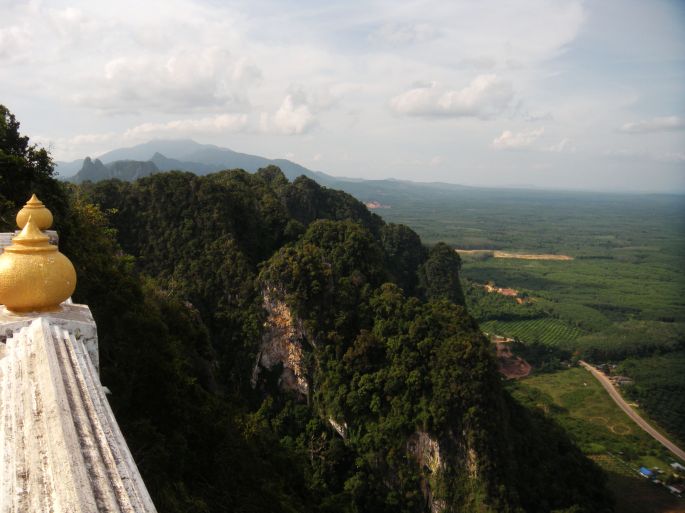 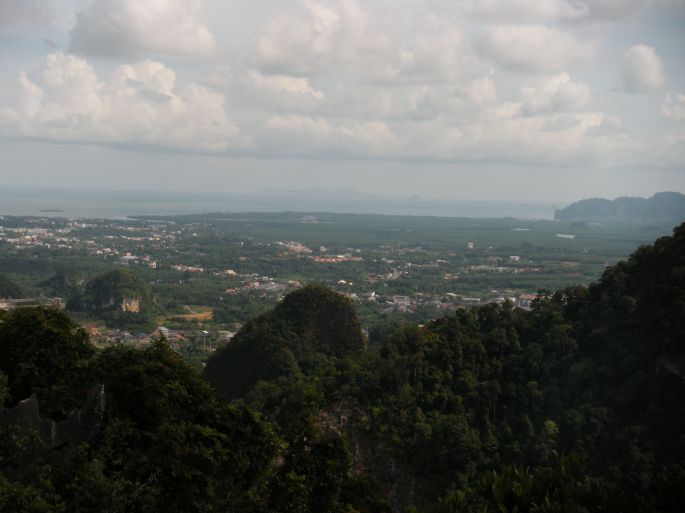 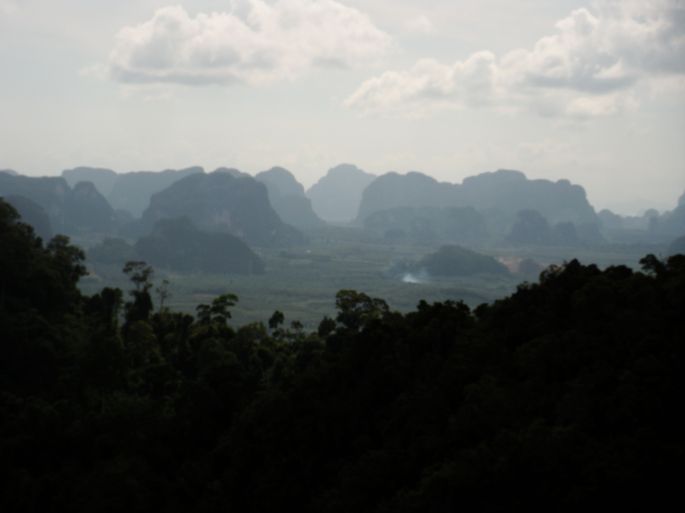 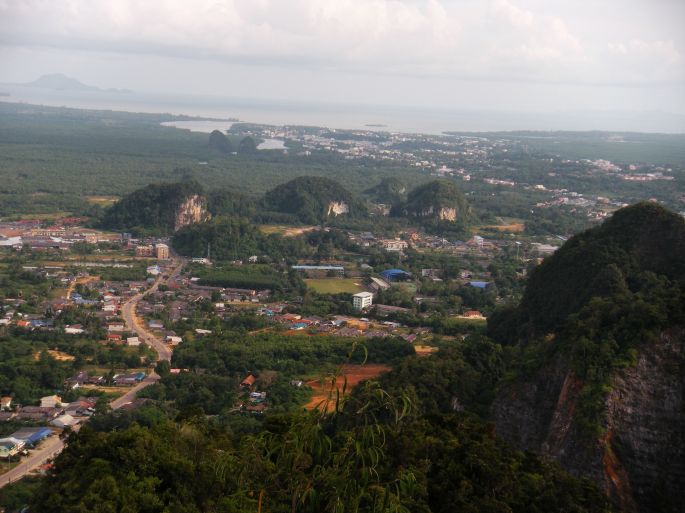 Unconsciously, it was getting late, so I went down the mountain. The taxi had already stopped at the gate of the temple, so I took the bus to the station and finished my one-day tour of Jiami. At five o’clock in the afternoon, the bus to Bangkok left the station on time-the tall and steep karst peaks on both sides of the road extended to the horizon. Under the sunset, the boundless dusk looked particularly strange, making people have endless reverie. Goodbye, Jiami, come again next time-Jiami and I really met and hated each other late, Jiami really made me feel unsatisfied……